On arrival we were hit by the very flat, dry landscape, the ramshackle array of low rise dwellings and the heat.

Arch 22 which symbolises The Gambia’s independence from British Colonial rule in 1965 stood out as the tallest building in Banjul. The view from the top on what was a clear day extended for miles with the Atlantic coastline visible in the distance.

Walking around Serrukunda the main commercial district was a little confusing to say the least. Our cultural ignorance made it difficult for us to pick out the uses of the vast array of workshops and retail outlets – it all seemed at first sight, chaotic. With no road signs or, in many cases, shop names we followed Famara, (the second eldest son of Lamin, the person in Gambia who is the primary coordinator of WGS Gambia visits and projects), blindly but slowly we acclimatised. We noticed children everywhere, some of them coming out of their houses to say ‘hello’ – many people walked around selling their wares trying to make a living. The town really came to life later in the week when we travelled back from Lamin’s compound at night. The atmosphere was vibrant, noisy and electric with the shops selling food, shoes, textiles and household items at their busiest. 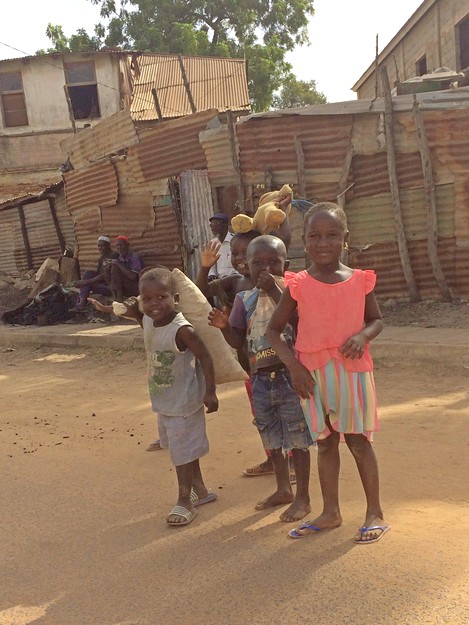 Travelling up country to Baddibu Disrtict on the North Bank of the river via the ferry at Barra was a very different experience. We managed to negotiate a place on the 7am crossing, saving a long wait for the next ferry! Two open top jeeps and Lamin’s charity vehicle squeezed onto the boat – everyone with life jackets donned – just in case!

An hour later we were on the (paved) road travelling East towards our project in Illiassa. Long and straight for as far as the eye could see – the open jeeps enabled us to soak up the atmosphere and appreciate the flat yellowing savannah grasslands – interspersed by numerous mango trees and imposing baobabs. Women, often with babies strapped to their backs, worked in the rice fields and donkey carts transported harvested crops. Girls collected water from wells and women swept their paths and hung out laundry – we saw few men. 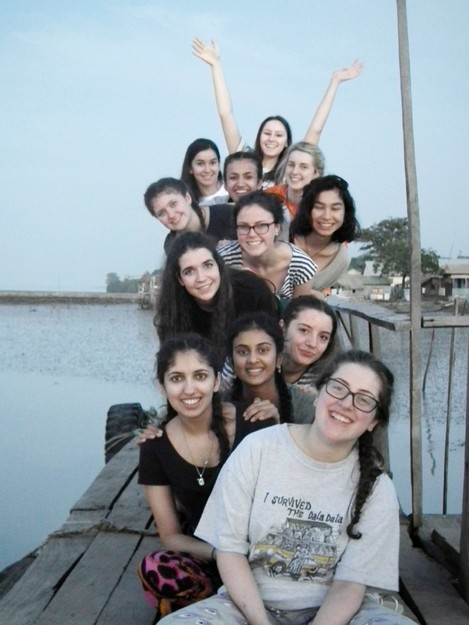 We stopped briefly at the Riders for Health maintenance depot where healthcare workers’ vehicles are serviced, managed and maintained enabling health workers to deliver vital health care to rural communities on a reliable and cost-effective basis. Through leasing these vehicles on a not-for-profit basis, the Gambian government are able to extend their medical coverage to remote rural areas by 40%. Numerous health-related billboards promote the work of the Global Fund and Action Aid in the fight against Malaria and HIV infection.

Mama Tamba Nursery School, a short distance off the main highway in Illiassa, is a little oasis in the midst of the dusty tracks and small compounds. The inspirational Headmaster, Tamba Jammeh, has taken the School from strength to strength with the help of funding from WGS Gambia fundraising.

Since the land was acquired in 2005, the School now boasts three classrooms, a dining room, toilet block, staff room, kitchen, store and office. Secure perimeter fencing and a new play area has been added this year thanks to the WGS 2015 team. There are now 111 children presently on the school roll between the ages of 3 and 7 years old. The feeding program (also developed this year) ensures a store of food is always available to feed the children each day. The WGS Gambia Fund pays the staff salaries, enabling all children to attend the School free of charge. 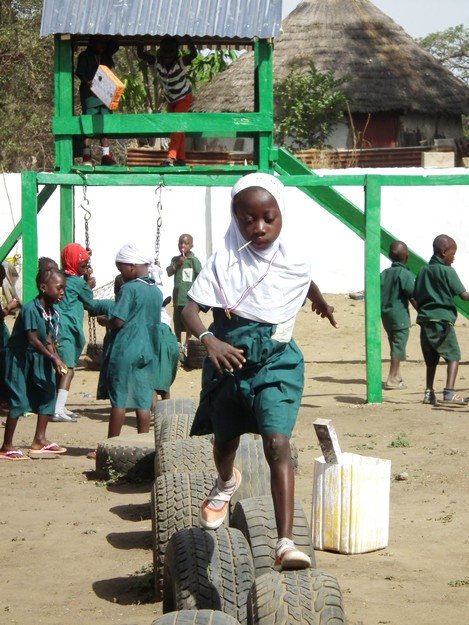 During our first day in Illiassa, we were tasked with whitewashing two classroom walls then painting our previously-planned murals. In the midst of the 35 degree heat, the twelve of us got to work on the two walls. We were able to see the fruits of our months of planning in just a few hours. One wall now boasted a vibrant baobab tree, with an array of wild animals surrounding it and the alphabet adorning its canopy. 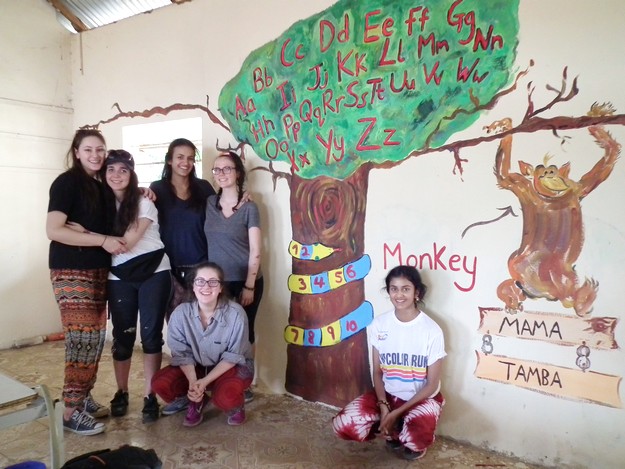 The other wall was brought to life by an exciting bus scene with cartoon children riding it and carrying with them a range of local foods which were annotated for the students to learn. Luckily we had three Art A-Level students in our company! As the outer perimeter wall was fairly bare, we were asked to somehow spruce it up. The end result was beautiful long grass, butterflies, flowers and insects painted on to enhance the colourful elements of the compound.

Although none of us were used to such toil in such heat, the atmosphere – made all the better by Miss Richards’ lively playlist and her helpful hydration reminders – was fantastic and the thought that we had physically helped the School in whichever way we could whilst we were there was hugely rewarding.

One of the most gratifying experiences of the trip was the day we spent teaching the children of Mama Tamba Nursery. We were split into three groups, covering the age range of 3-6, each group tailoring their activity to the age appointed to them. Activities included making colourful paper chains, wooden spoon puppets and self-portraits. Whilst we were all initially a tad shy and nervous, the infectious enthusiasm of the children and their can-do attitude made the one hour lesson fly by!

The session ended with excited children holding up their artwork, each with a wide grin and a proud gleam in their eye. This activity in particular demonstrated to us how eager the children are to learn and how small things which we take for granted – stickers, hair bobbles, paint – can become a source of delight. This was one of the only times we were able to fully integrate with the children and, despite the age and language barrier, we were able to interact with them with ease and joy.

The next item on our itinerary was the 10 years celebration of Mama Tamba Nursery, which was an honour to attend. Furthermore, we were generously gifted with traditional Gambian dresses, made by the local women. Once we had all just about managed to squeeze ourselves into the costumes it was time to go into the courtyard and sit as part of the guests of honour for the ceremony. The programme itself was an amazingly eye-opening insight into the work that Mama Tamba has done for the community and plans to do in the future.

Toe-tapping tunes, performed by a scouts’ band from the local high school, were interspersed between speeches given by notable figures in the community. The ceremony gave us a flavour of the fantastic work that Tamba and his team do to further the level of primary education within the Gambia. Inspirational speeches by the local chief and the headmistress of the local high school highlighted the problems still faced by the Gambia, Illiassa in particular, and how we can help. It was an honour to be present for such an important ceremony, celebrating a brilliant achievement, the success of Mama Tamba Nursery. 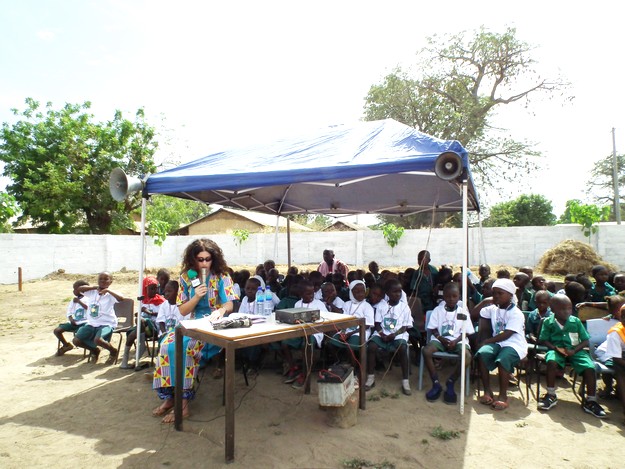 One night up country was spent in a local guest house in Farrafenni. We were treated to a sumptuous meal cooked by Saiku’s wife, eaten by candle light in the yard of his home.

The second night involved a trek through the grassland and across muddy tracks to the riverside to board a motorised canoe which took us through the mangroves and across the river to Gambian-owned Tendaba camp located in Kwinella on the South Bank, in the Kiang Central Region, about 150 km from the capital of Banjul.  An eco-tourism camp with a riverside location and amazing sunset proved to be a very tranquil and peaceful setting for us to relax following a very busy three days.

Enroute back to base we stopped for lunch and a look around at MyFarm. With the tagline ‘from seed to business’, the completely organic farm, supported by NGOs, aims to teach independence and flexibility to Gambian men and women enabling them to be socially enterprising and to acquire new skills to use The Gambia’s biggest asset – its land – to develop successful farming initiatives.

Describing the trip as a “once-in-a-lifetime experience” is an understatement. Being able to experience Gambian lifestyle, culture and tradition was wonderful. From seeing the ever-smiling faces of the young Gambian children as we drove through the towns to stroking a live crocodile, every aspect of the trip was tailored to expand our knowledge of our world and give us the opportunity to see something new. The journey and stay at Illiassa was an eye-opening experience and our time spent with the children of Mama Tamba will never be forgotten. This trip truly broadened our horizons and it can safely be said that we all left The Gambia with a fresh perspective on the world. The chance to witness another way of life and interact with another community was a true privilege.