Whilst December festivities got under way, six Sixth Formers embarked on an Expedition of a lifetime to The Gambia on a charity project organised by Miss Browning in collaboration with Perse School for Girls, Cambridge.

Having fund-raised hard for a year, the girls aimed to replace their single, cramped classroom at Pat’s Nursery School in Kerewan, and turn it into a purpose-built block with three classrooms and a staff office. After a superb response from parents and sponsors alike, the girls raised an astonishing £13,000, the majority of which went towards Pat’s Nursery but also helped fund side projects such as fencing Nokunda Lower Basic School and helping the Mother Teresa’s Clinic for Malnourished Babies.

Following the huge success of the project, twelve girls from the Lower Sixth have already begun fund raising for another Expedition going out to The Gambia in December 2005, in an ongoing effort to maintain long term links with the Gambian schools. 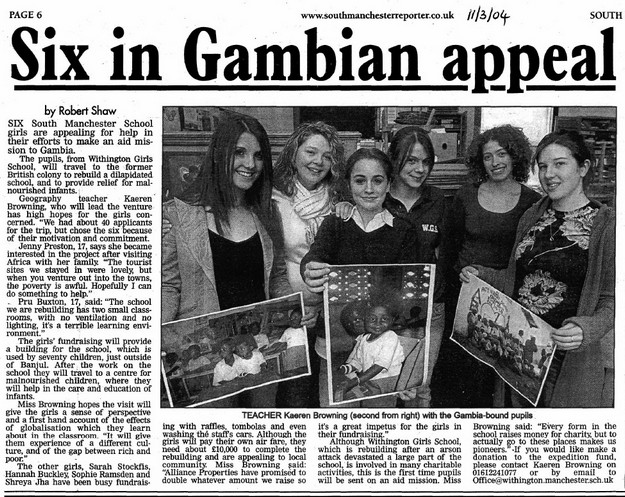 The team would like to express their sincere gratitude to all the parents, sponsors and individuals who donated towards this wonderful cause and the trip truly would not have been the same without your support. Thank You!