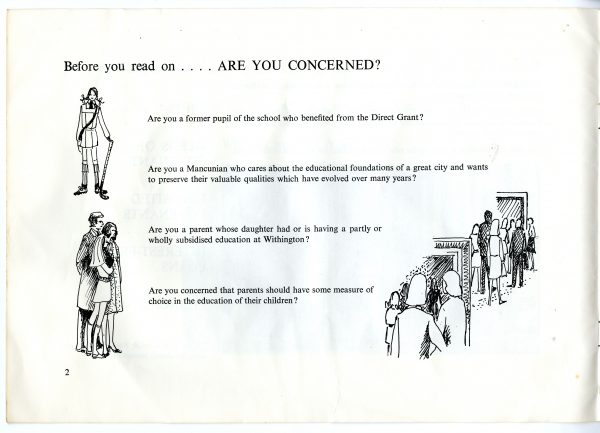 From 1927, Withington Girls’ School was one of two hundred and thirty schools aided by capitation grants from the Government. In return for this, Withington reserved 10 percent of places for pupils from public elementary schools.

In 1945 new conditions were imposed as part of the Education Act that changed how schools could receive income through grants and fee-paying families. The 1945 School Newsletter explains,

‘Administrative action was taken by the Ministry of Education concerning Direct Grant Schools for which new conditions were laid down. Some schools which had been Direct Grant schools, decided to give up financial aid, to award no free-place scholarships and to increase their fees to such an extent that they could continue successfully as Independent schools. Other schools decided to charge no fees and to become increasingly ” aided ” by the Local Education Authorities.

The new conditions required that 25 per cent, of the places must be free and must be reserved for pupils from public primary schools. All pupils admitted to the Upper School of Direct Grant Grammar Schools must show a certain ability and aptitude for the studies proposed. Fees might be charged, but they must include the cost of providing text-books and they must be graded so that a parent with a small income paid only part or none of the maximum fee.’

In 1945 Withington Girls’ School was recognised as a Direct Grant Grammar School. Pupils entering the School from a low-income family would have financial assistance provided by the Ministry of Education and the Local Education Authorities.

WGS continued to offer opportunities to girls of different backgrounds under the Direct Grant Scheme until it was abolished in 1976. At this time, Miss Hulme was Headmistress and oversaw the transition back to Independent status. Miss Hulme did not want gifted girls from low-income families to miss the opportunity to attend WGS. She quickly established a bursary scheme to ensure that the school remained open to pupils from all backgrounds. 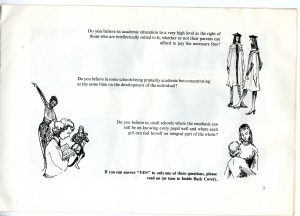 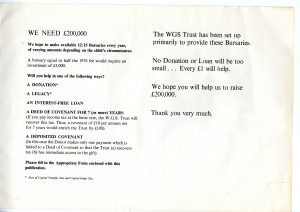 The very first Bursary Appeal leaflet produced in 1976 explained that the School hoped to raise £200,000 to provide assistance to intellectual girls who may not otherwise be able to attend. The booklet asks the reader ‘Do you believe in small schools where the emphasis can still be on knowing every pupil well and where each girl can feel herself and an integral part of the whole?’  The Bursary Fund now enables 1 in 6 girls to benefit from Withington’s facilities.

The 1976 School Newsletter records the success of the Bursary Scheme,

‘Although, at the moment, there is some cushioning of the effect of the loss of the direct grant because of the generosity of sympathetic LEAs, many parents are themselves having to pay the full economic fee and we shall be glad when the Trust Fund has grown to such an extent that we can ameliorate the burden for more people. This year, some bursaries have already been awarded: the amounts offered have varied according to the parental income but are roughly equivalent to the remission given under the direct grant scheme. Also, a small reduction has been made in the fees of new entrants to the main school in those cases where an older sister already holds a fee-paying place.’

Miss Hulme’s foresight and immediate resolve to establish the Bursary Appeal has meant that many girls have benefitted from this support over the years. To hear a selection of personal stories regarding the Bursary, please watch our Withington Now and Then oral histories film. Here, Old Girls speak of their memories and you will find a whole section dedicated to the Bursary Appeal.