The Withington Curriculum is designed to suit the needs and abilities of our girls whilst also taking account of changes which take place nationally. We are not obliged to follow the National Curriculum but we do incorporate those elements which suit the abilities of our pupils. The Senior School selects on ability at age 11 and the curriculum is determined to a great extent by the academic profile and aspirations of our pupils. Balance is still important and girls are encouraged to choose subjects from a range of areas and make the most of the extra-curricular activities on offer to explore and develop their interests further. 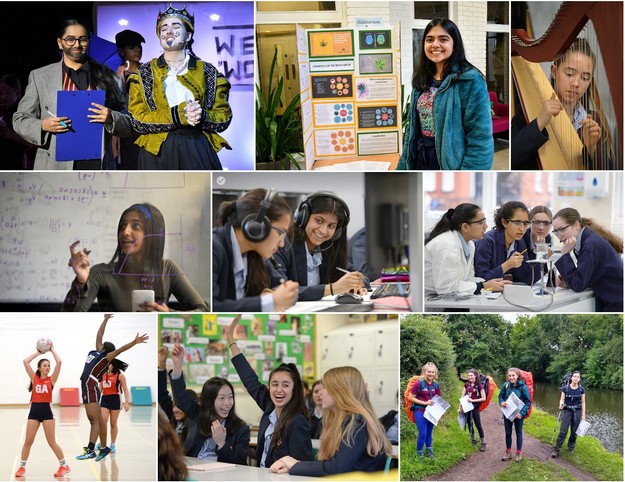 At Key Stage 3, girls study a very wide range of subjects. This is designed to provide them with a broad and balanced education and help them to discover their particular talents. The Key Stage 3 timetable is based on the National Curriculum and intended to give the girls breadth and balance. Every pupil has lessons in

Girls attend most classes in their form groups, though there are some exceptions. Sciences are taught in four groups, rather than three forms. There is no setting by ability; the smaller groups are simply to allow greater access and safety when conducting experiments.

Other practical subjects also benefit from being taught in smaller groups: Design and Technology and Food and Nutrition are taught in half-forms, as is Music in Year 9.

The girls have 40 lessons per week. Some subjects are taught as double lessons to allow sufficient time for practical work or further development of ideas. The learning of languages, however, is facilitated by frequent exposure so they are generally taught in single periods. Year 9 pupils have an introduction to Classical Greek in the Spring Term.


Towards the end of Year 9 they choose which subjects they wish to study as GCSEs and they continue with these subjects for the next two years. Pupils currently take nine or ten GCSEs at the end of Year 11, depending on whether they are entered for the Further Maths GCSE.

Some subjects are still compulsory during these years. All girls study English and English Literature, Mathematics and either Double Award Science or the three Separate Sciences. If a pupil opts for Double Award Science, she will have three periods each of Biology, Chemistry and Physics; girls who have chosen to study the separate sciences will have four periods each of Biology, Chemistry and Physics. All other GCSE subjects are allocated four periods per week, except Maths, which has five per week.

Year groups are split into four classes of around 20 students in English and Maths. There is no setting in English but Maths groups are arranged according to the girls’ level of attainment so far, so that teaching and support can be better targeted. Science groups depend on how many girls choose separate sciences and how many choose Trilogy Science (double award); there are at least four groups across the year and often five, allowing for more individual attention in class.

Every pupil is expected to choose at least one modern foreign language among their options. In addition, all pupils have a timetabled PSHCE lesson which is used to discuss various issues and also allows some time for careers guidance. All girls have some timetabled PE lessons although the actual number of periods varies because of the difference between the allocations required for Trilogy and Separate Sciences. Those girls who have a more generous provision of PE are able to take a general, non-examined course in Religion and Philosophy in place of one of the PE lessons.

Girls who have elected to study three separate Sciences may choose three other GCSE subjects to study, whilst girls studying Trilogy Science may choose four other GCSE subjects. The subjects available to study will depend on the choices made by the girls, but every attempt is made to accommodate all the girls’ preferences and in most years, over 99% of subject choices are accommodated.

Currently, our pupils study either three or four A Level subjects. If they study three subjects at A Level, we usually recommend they supplement this with an Extended Project Qualification. Sixth Form students also follow an Enrichment programme that consists of a small number of short compulsory courses along with some optional, non-examined courses of their choice. The girls are looking ahead at this stage; virtually all go on to university and the curriculum is designed to reflect the changing requirements for university entry.

Discover more about A Levels at Withington