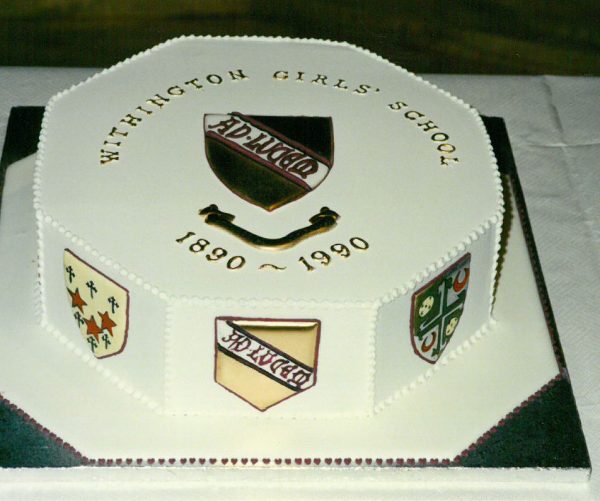 The year 1990 marked an important milestone for our School with celebrations reaching their peak in the summer term. The introduction to the newsletter provides a wonderful overview of the Centenary events;

‘We have been delighted to entertain so many hundreds of you during the year, especially over the July Weekend which formed its climax. Centenary year began with a Birthday Party in School, when we enjoyed watching the amusing and rather touching old school film and heard a fascinating talk from Miss Hulme on the early days of W.G.S. The party ended with everyone in school receiving a slice of delicious birthday cake, baked by Mrs. Pat Mamelok.’

The film that the Newsletter anecdote is referring to is our cherished black and white silent film. This film documents life at Withington in the summer of 1939. It records pupils cycling through the School gates, taking part in lessons and hopping on the bus (we think to go swimming!). The film also shows the Governors and Miss Bain, the Headmistress at the time, talking to one another outside the front of School. The film has now been digitised by the North West Film Archive, and we are lucky to be able to easily share this amazing resource. You can view the film below;

As well as a School party, the Centenary was honoured during a number of dramatic and musical performances of ‘Northern Lights’. Miss Boucher devised the story while Sasha Manning wrote the musical score. There were endless colourful costumes and a simple backdrop using fabric in School colours. Juniors, Seniors, Sixth Formers and Old Girls participated in this production that carefully demonstrated the School’s history and aspects of School life in 1990. Troupes of seaside Pierrots from 1890 helped present-day pupils celebrate before the finale where every member of the audience lit a torch to symbolise our School motto ‘Towards the Light’. 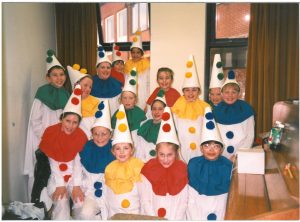 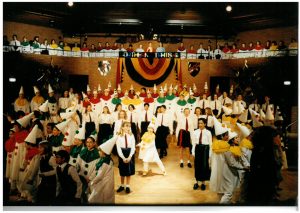 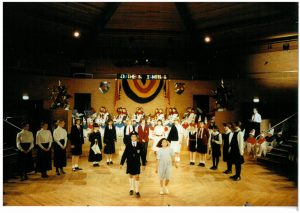 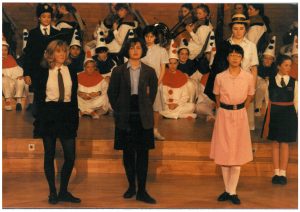 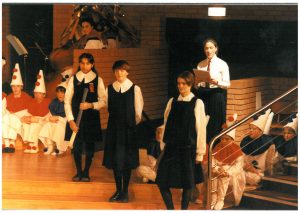 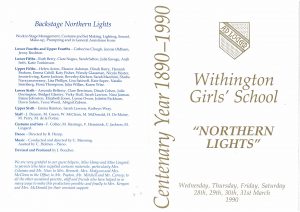 In addition to parties and performances, a special artwork was commissioned to commemorate the Centenary. Textile Artist Marta Rogoyska created a striking tapestry that incorporates fantastic patterns, shapes and colour. This artwork still hangs in the central stairwell along with a series of framed watercolour and collage designs. We now offer creative Year 7 pupils an opportunity to enroll onto the Arts Award Bronze programme. The tapestry and supporting designs are used as a starting point for one of the programme’s units looking at inspirational artists and their work. 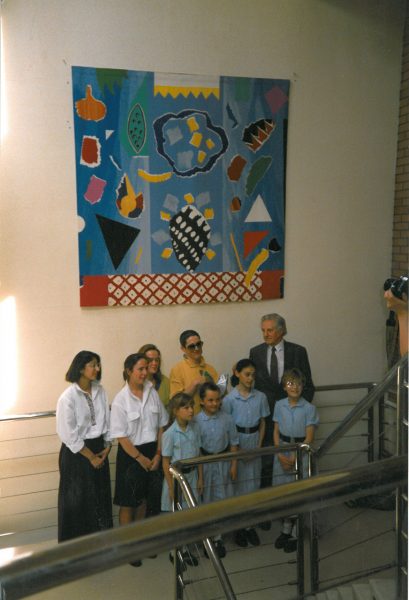 The Centenary was not only celebrated through the Arts, but also through sporting fixtures. A team of Old Girls consisting of previous Hockey Captains fought against the School team. The hockey match was watched by the entire School and ‘After vigorous play by both sides, it ended in a 0-0 draw.’ As well as sports, Withington flew the flag for Science. The Headmistress Mrs Kenyon spoke of a Physics event in her Founders’ Day speech;

‘Many distinguished visitors and young people from seventeen schools and colleges came to the “Physics at Work” exhibition which we organised on behalf of the Institute of Physics. There have been 94 such exhibitions, but this was the first to be held in a girls’ school.’

In July of the Centenary year, an ambitious Gala Weekend was organised for Old Girls. The event provided a platform for nonstop talking over endless cups of coffee and the sharing of old photographs. The newsletter thanked the catering team for all their efforts;

‘Finally there was a constant supply of coffee in the Foyer, and this reflected the immense hospitality of school and the tremendous job of catering which Mrs. Chambers and her ladies had done – wonderful lunches for a thousand, a marvellous supper for four hundred the night before with fresh salmon and all sorts of other delicacies including quails’ eggs.’

The 100 Year Anniversary was finally celebrated by the publication of the book ‘Withington Girls’ School: a celebration of the first hundred years’.  Since the Centenary, we have enjoyed commemorating 125 Years of Withington, and this milestone has also been marked with the book ‘Towards the Light’. You can find out more about this publication here.

A quote from the Centenary Newsletter states; ‘This year has been a very happy one for the school. Now we look forward to an equally happy and busy future.’ This sentiment remains the same to this day.