Manchester was an important inland port and industrial city during the war, and Trafford Park in neighbouring Stretford was a major centre of war production. The heaviest raids occurred on the nights of 22nd-23rd and 23rd-24th December 1940, and killed an estimated 684 people and injured 2,364. On the night of 22nd-23rd December, 270 aircrafts dropped 272 tonnes of high explosive and 1,032 incendiary bombs. Looking back through our school archives, we have been able to understand how Withington Girls’ School adapted to the change and danger that the war brought, not least with the construction of Air Raid Shelters. 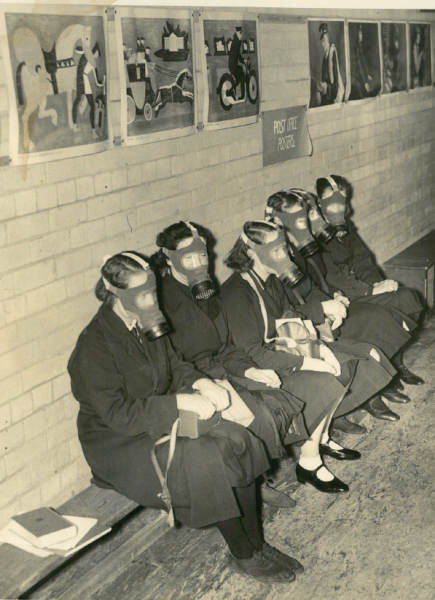 In 1939, following the outbreak of the Second World War, the Withington Girls’ School community was evacuated to the market town of Uttoxeter, Staffordshire, however it was deemed safe for them to return to Manchester in the Spring term of 1940. In 1939 the construction of Air Raid shelters in the school grounds took place. There was a main shelter and a prep shelter, both made of brick, and the cellars were also used.

In the Jubilee Newsletter, Christmas 1940, pupils spoke of their views and experiences of the shelters; 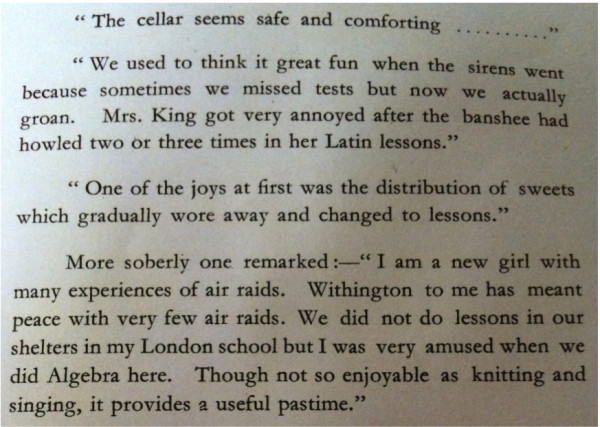 Girls spoke of their appreciation towards the comfort and safety they felt in the shelters- rather more so than for the cellars; “we pass to our dungeon with its corrugated iron roof and cold looking white-washed walls and pack ourselves together so we feel like a tin of sardines”.

It has to be noticed that the shelters were quite cramped but they managed to see the fun in this; one girl remarked “I started drawing a bird in flight, but as everybody was jogging my elbow, it finished as an elephant”! It seems the prospect of sweets was enough to keep spirits high, with Miss Bain’s “gigantic jar of sweets” being particularly popular! As well as sweet treats, singing led by the teachers was an important morale booster as well as helping to drown out the deafening noise from outside the safety of the shelters. Girls spoke of their admiration of their teachers who acted as air raid wardens; “They are brave, for they walk about even when bombs are dropping and shrapnel is falling, but they still keep on blowing their piercing whistles frequently.” In spite of their “decidedly odd” tin hats, the girls recognised the integral role of those such as Miss Corfe and Miss Veirty, in ensuring their safety.

The Air Raid shelters were invaluable in ensuring that education at Withington could be sustained throughout the duration of the war. Despite the hardships endured and the terror that the Second World War brought to the home front, the 1940 newsletter documents the resilient character of our school community. School hours were adjusted following sirens and hours of blackout; in December 1940 they were from 9.30am to 3.30 pm. House matches in of 1939 autumn and winter terms were cancelled but in the summer term the house shield was won by Scott. Although sports fixtures may have been cancelled, the school remained thoroughly industrious and continually supported the local and wider community. The school sent parcels of knitted clothing to the Army, Navy and R.A.F, the First Form boys knitted blanket squares for the Red Cross and the W.V.S., parcels were sent to refugees in the Channel Island and a multitude of collections were made to help support charities such as the Royal Lifeboat fund and the Lord Mayor’s Fund for Air Raid Distress.

The newsletter also documents the continued achievements of pupils despite of the circumstances. In 1940 Erica Wood was accepted to Bedford Physical Training College and correspondence from Ester and Diana Almond was received, captivating the school with exciting tales of their travels, visiting Table Mountain and Cape Town before sailing on to Australia. Swimming lessons continued at Chorlton Baths, facilitated by the hiring of a ‘motor coach’, however swimming displays had to be cancelled. 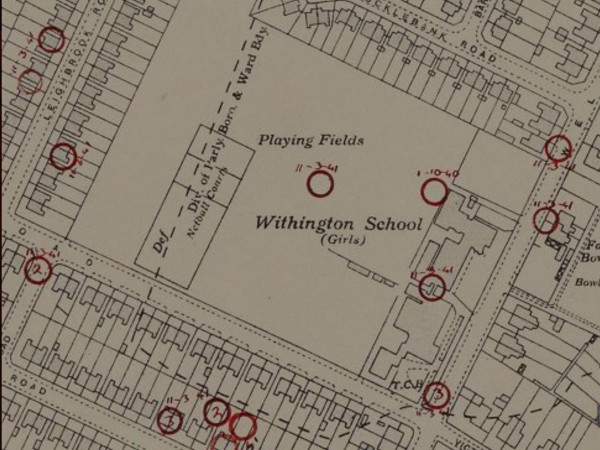 Manchester was devastated by the Christmas Blitz, amongst several air attacks beginning in August 1940, and a contemporary account by Alumnae member, Gloria, recalls the great sadness when she saw the damage incendiary bombs had inflicted on the playing field, where as a keen lacrosse player she spent a lot of her time at Withington. She also however, recalls, “I do not remember being scared” when she was in the shelters.

In 1939 conscription was introduced and the Second World War brought war to the home front, yet it appears that at a time of great strife, when so many families and communities were torn apart, our school offered a place of safety and normality which was undoubtedly invaluable to ensuring that pupils could carry on with their education throughout the war years.

Upper 6th Pupil and member of the Archive Volunteering Club