Manchester Sings 2022: We’re all in this together 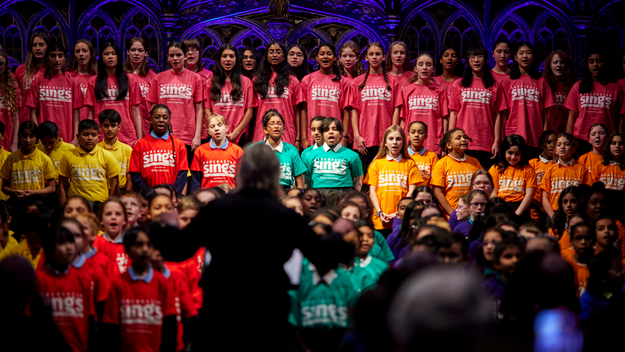 Withington Girls’ School senior and junior pupils gathered with children from six Greater Manchester primary schools in the spectacular setting of Manchester Cathedral on Tuesday 29th November to perform together in a celebration of music and poetry as part of an inter-school partnership project known as Manchester Sings. 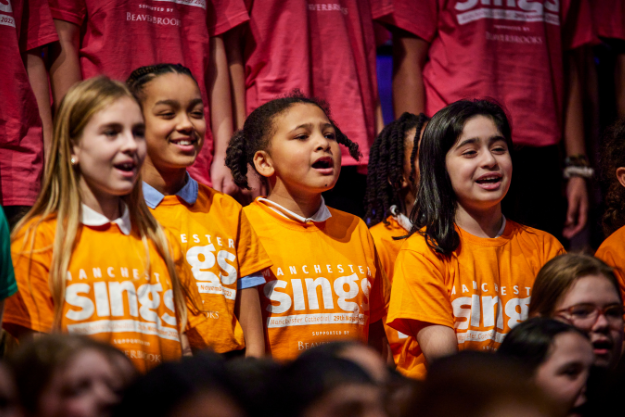 All participants donned colourful t-shirts for the occasion and performed a harmonious and uplifting medley of songs, interwoven with poems written by pupils, inspired by the theme ‘We’re all in this together’.

The hour-long event, organised for the third time since 2019 by WGS, was a heart-warming experience for the audience of families, friends and invited guests, who included Greater Manchester’s Lord-Lieutenant, Mrs Diane Hawkins DL JP, the Lord Mayor of the City of Manchester, Councillor Donna Ludford, and Manchester Cathedral’s Reverend Canon Nigel Ashworth. 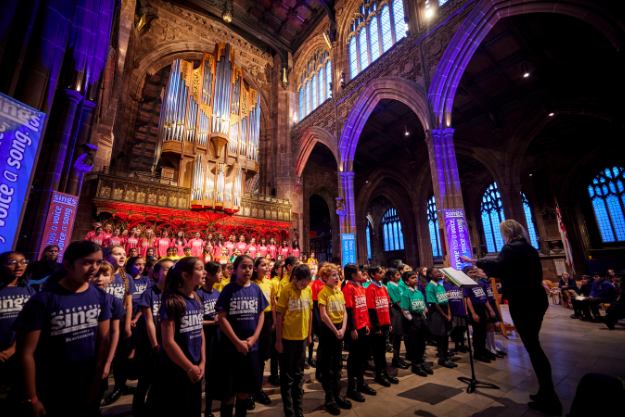 Withington’s Director of Music, Mrs Gilly Sargent, who has led rehearsals at each of the schools over the past few months, praised all involved for their effort and commitment. “Watching these children, some as young as seven, practising so hard, enjoying their music and growing in confidence has been truly inspiring. It’s been wonderful to see these primary school pupils from different parts of Greater Manchester performing as one with such passion and energy at this magnificent venue in the very heart of our great city. As always, this has been a musical journey for all those taking part. Music is such a powerful force for good – everyone has a voice, every voice has a song,” she said.

Mrs Sargent explained that this year’s theme had been chosen as a reminder of the strength of community and the need to support each other through challenging times. “It is however, a story with a message of hope,” she said, adding that this had been reflected in the readings, which had been written by the children themselves to reflect their own personal thoughts and experiences.

With the title ‘Musical Harmony’ one Year 5 pupil had written, “People are the instruments of this world. Everyone has a role to contribute, we are stronger together when we listen and help one another. Together, we can overcome any challenge,” while another Year 5 child, referencing the much-loved Manchester bee, had ended his poem with the words, “The Manchester way, the bees help the hive. Like we help each other. We’re all in this together.” 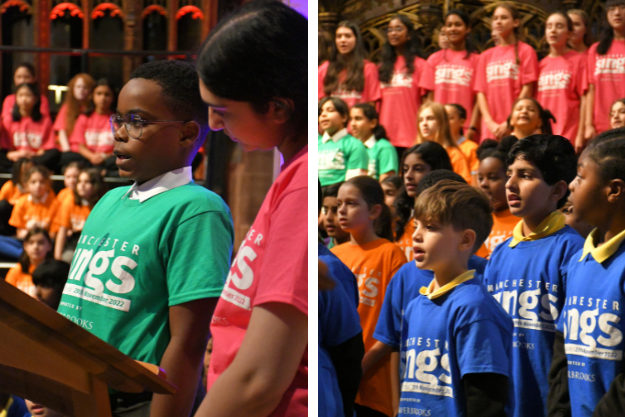 Mrs Ria Drabble, a Year 5 teacher at Broadfield Primary School, who has worked alongside Withington’s Director of Music and Manchester Sings organiser Gilly Sargent with three different classes since the project was launched in 2019, said: “Manchester Sings provides our children with an invaluable opportunity to be part of something so much bigger than themselves. They feel an enormous sense of pride when they attend Manchester Sings, pride at representing both their school and their town.  They see themselves as part of a larger community, working with a common goal, and they get to feel the exhilaration of performing to a large crowd of people.  Over the rehearsal period, it has been an absolute pleasure to see them grow in both confidence and enthusiasm for the music we have rehearsed.”

Broadfield pupils also spoke of their involvement in the event. “I really enjoyed Manchester Sings – my favourite song was We’re all in this together,” said Stephen, whilst Falak said, “Manchester Sings was a lot of fun, and I liked singing with the other schools as a big team.” 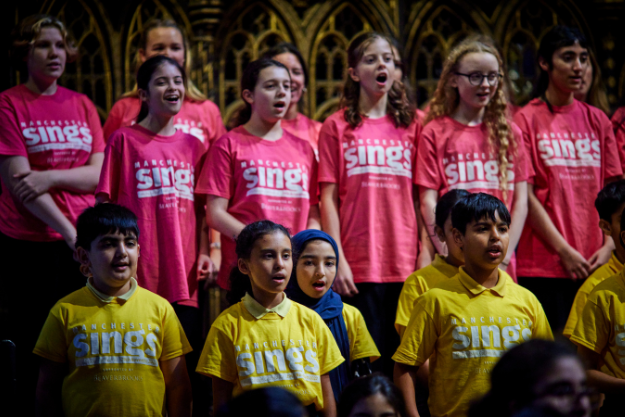 Whitefield Community Primary Headteacher, Mrs Katy Dickson, welcomed the event as “an incredible opportunity for our children to share their musical talents and perform in the wonderful space of the Manchester Cathedral”. She continued: “For many of our children this is one of the rare opportunities for them to perform on a ‘big stage’, not only does it celebrate music, it opens their eyes to their potential and the world beyond our school walls and the opportunities available to them in our local community. We value this project as a raising aspirations experience for our children, which leaves them captivated by music and performance. Above all, it helps them to identify as one voice with many, opening their eyes to the power of community.”

Whitefield parent Mrs Sarah Johnson described the event as “very special”. “It’s the coming together and the connections. Music removes boundaries and new friendships have been formed today. In that moment, up on the stage, the children bonded with each other. There was no shyness. Children from different schools have been sitting opposite each other, they’ve met for the first time today and they have instantly clicked.” Her daughter Clareese, a Whitefield chorister added: “We made friends with children from the other schools as we were singing the songs together and it was fun to be able to chat to them during the breaks.” 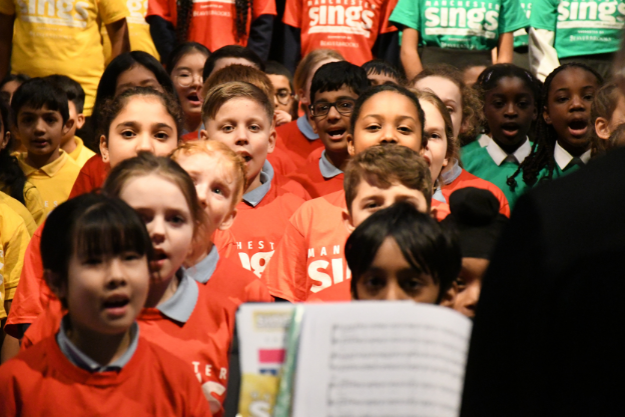 Another Whitefield chorister, Favour, said it had been a memorable experience. “It’s been so good to see all the schools get together to sing as one choir for the first time and a great thing to be involved with before our SATS next year. Today has been a really good experience.”

St Kentigern’s Assistant Head, Mrs Annie Malone, said: “It was such a brilliant experience for the children to be gathered together with other children to perform together in this beautiful building. It’s amazing because many of the children don’t often come into Manchester city centre. It helps to builds confidence and lifts aspirations.” 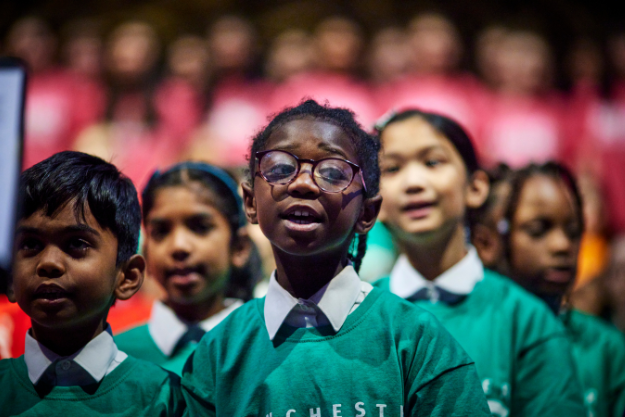 St Luke’s parent and governor, Mrs Maryam Latif had attended the event to watch her Year 4 nephew take part. “It’s been a brilliant experience. It’s the first time my nephew has been involved and he was just so excited.  I can’t wait to come back next year when hopefully my daughter, who is currently in Year 3, will be able to participate too. It’s been lovely to see everyone get together here today – there’s such a diverse group and it’s a great example of community cohesion. Phenomenal!” 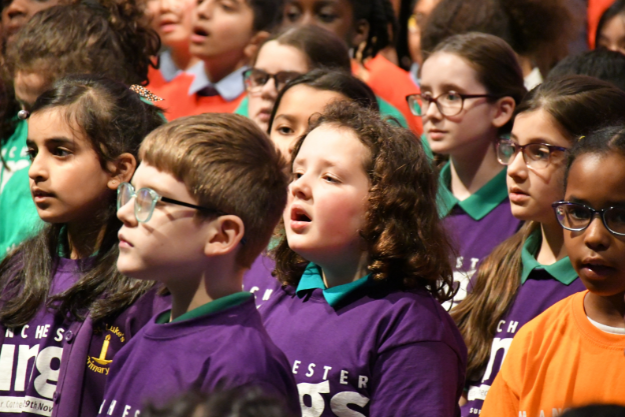 Manchester Sings is an annual event that aims to give children from across Greater Manchester the opportunity to celebrate community and the power of song. Primary schools who are interested in participating in future Manchester Sings events are invited to email manchestersings@wgs.org with their contact details. Funds raised during the event and via online donations go to help the Booth Centre and Wood Street Mission.

We are grateful to Beaverbrooks Jewellers for their sponsorship of Manchester Sings since the inaugural event in 2019.