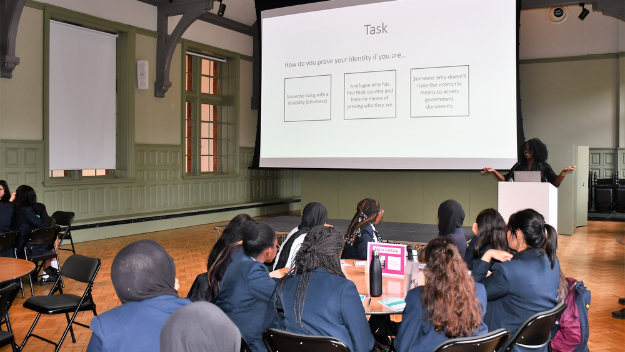 The aim of equipping young women with ‘soft skills’ in order to succeed and flourish in their future lives and careers brought Manchester Academy and Withington Girls’ School together to establish Future Focus – a series of conferences to inspire young women with confidence, develop self-esteem and improve mental health.

The first in this new series was held on Friday 20th May 2022 in the Grand Hall of The Whitworth Art Gallery. The conference was attended by 40 Year 10 pupils from Manchester Academy and 80 Year 9 Withington pupils who heard from a range of speakers in different career fields and considered issues of inclusion and diversity.

Two of the conference speakers were Withington alumnae, Louise Maynard-Atem, Head of Data Insights at GBG, and Niku Nobakhti, Project Engineer at Costain. They gave talks on Why Diversity Pushes Boundaries and Driving Change. Talks were also given by Kate Wood, a consultant on organisational culture, on Managing Criticism, Developing Self-Esteem and Zara Street, founder of Keep It Bright, on Living an Authentic Life. 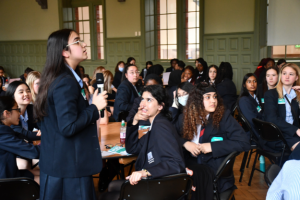 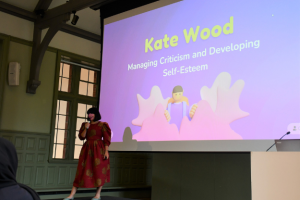 Pupils had a handbook to work through during the conference. It tasked them with thinking critically about what matters to them, their hobbies and interests, and how their future career options may look. Initial verbal feedback from pupils on the day was very positive and both schools enjoyed meeting each other and working together. Staff from both schools were impressed with the way pupils collaborated on tasks.

Mrs Edge, WGS Partnerships Coordinator, said: “We were delighted to run this first Future Focus conference in partnership with Manchester Academy. As staff members we’ve really enjoyed working with staff from Manchester Academy and the pupils from both schools have enjoyed working together over the course of the day too. We look forward to our next Future Focus event.”

A Withington pupil said: “We wish we’d had even more time to work with the pupils from Manchester Academy. We really enjoyed chatting to them.”

Miss Rebecca Tempest, a teacher at Manchester Academy, said: “We want to thank you for a brilliant day. I thought it went really well and the initial feedback from students has been amazing!”

This is the second joint enterprise the schools have worked on. Earlier this year, the Science Partnership was launched. Year 11 pupils from Manchester Academy were invited for a day of revision, led by WGS Year 12 A Level scientists, ahead of the GCSE examinations.

Looking to the future of Future Focus, the plan is to invite different speakers and cover different issues at each event which will be held either annually or every other year.