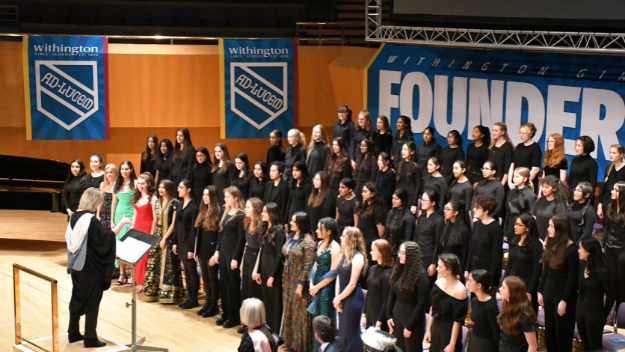 Pupils, staff, parents, alumnae, governors, trustees and friends were delighted to be able to gather together once again as a whole school community for the first time since October 2019 to commemorate Withington’s founders, pay tribute to our Upper Sixth leavers and to reflect on our pupils’ achievements over the last 12 months.

In an uplifting afternoon of inspirational speeches, readings and music at Manchester’s Bridgewater Hall, the special qualities that underpin the indomitable ‘Withington spirit’ such as resilience, determination and perseverance, were a recurring theme throughout the addresses.

Chair of Governors Mr Malcolm Pike, opened the ceremony, describing the school as a place where collaboration, personal challenge, inclusion and diversity are the order of the day: “It is a community which fosters and encourages resilience and which generates a real determination to succeed, qualities we have seen in abundance across the whole school, and most notably the pupils, throughout the Covid pandemic.” Mr Pike added that the school has emerged from the Coronavirus crisis in a strong and healthy position, with the recent opening of the impressive new dining room and extension completing one of the final phases of an ambitious ten year-building plan, and the appointment of a Deputy Head with responsibility for Academics from September. 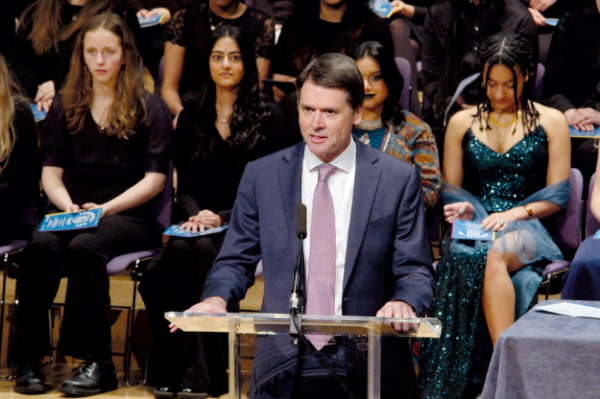 Headmistress Mrs Haslam reaffirmed that despite these unusual times, there are many reasons to celebrate, sharing achievements that make Withington such a special place. Citizenship Day had seen pupils and staff engaging with equality, diversity and inclusion in a fascinating day of talks and discussions; Feel Fab Feb had focused on respect for self and for others; the second Manchester Sings event saw Withington’s Choir join with partner primary schools at Manchester Cathedral to share the joy of music and the power of community; and in response to the war in Ukraine, £2,000 was raised in a single day. In keeping with our commitment to social inclusion, Withington’s first-ever Giving Day had resulted in a £70,000 boost to bursary provision, moving the school closer to our target of providing financial assistance to one in five Senior pupils – “an outstanding response”, she said. “These are all examples of the Withington magic at work, a very special blend of endeavour, challenge, empathy and collaboration.” A new addition to the event for this year was the presentation of trophies to the recipients of our first Ad Lucem Awards for alumnae who were described as ‘exceptional ambassadors and role models’, with attributes that embody the WGS ethos. 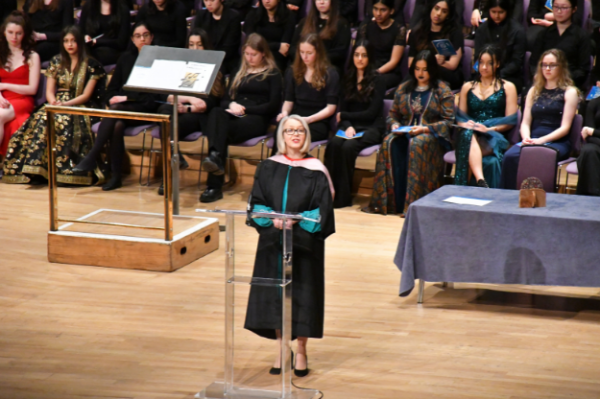 Presentations of the Alumna and Young Alumna awards were filmed prior to Founders’ Day, and thanks to a large screen in the Bridgewater Hall auditorium, the school community was able to watch as winners Brenda Milner and Bronya Sykes received their trophies that had been designed last year by pupils. A third award, made posthumously in memory of Class of 2010 alumna Rose Acton, was collected by her mother and father. Future recipients of the Rose Acton Award will be recognised for sharing the same qualities that Rose herself displayed throughout her life and that are valued highly in our school community; qualities such as courage, curiosity, kindness, humour, determination, resilience and a desire to improve things for others. 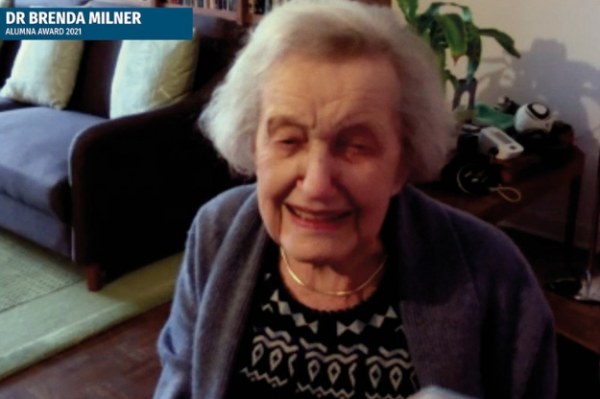 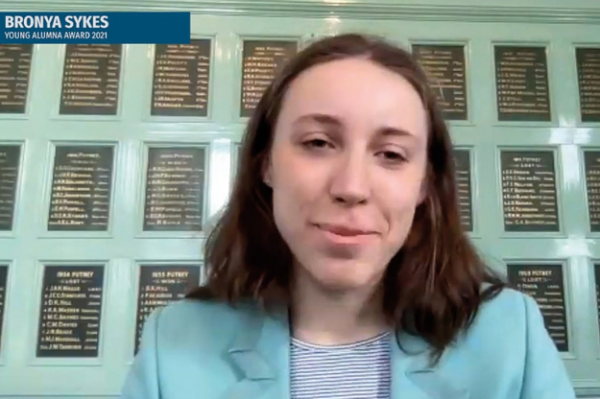 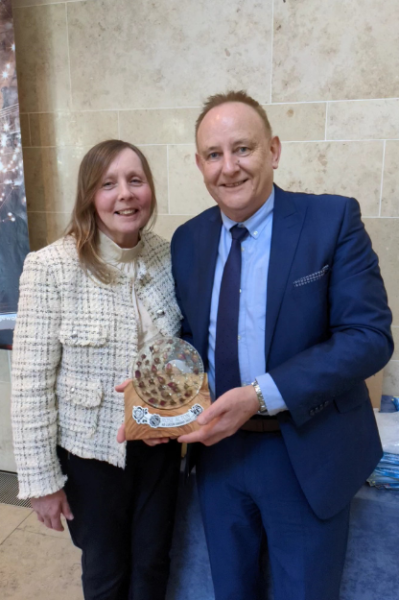 The Upper Sixth were each presented with a book of their choice as is Founders’ Day tradition by guest speaker, the High Sheriff of Greater Manchester, Mrs Diane Hawkins (JP DL) – a former pupil and current WGS Governor, who said that having seen the school community face challenges with determination and a smile, she is optimistic for the future. Past crises throughout Withington’s history have included war, fire and now a pandemic, she reflected, but through adversity “we have grown stronger, wiser, and closer together because of what we have shared. Resourcefulness and resilience have always been the hallmark of Withington girls.” 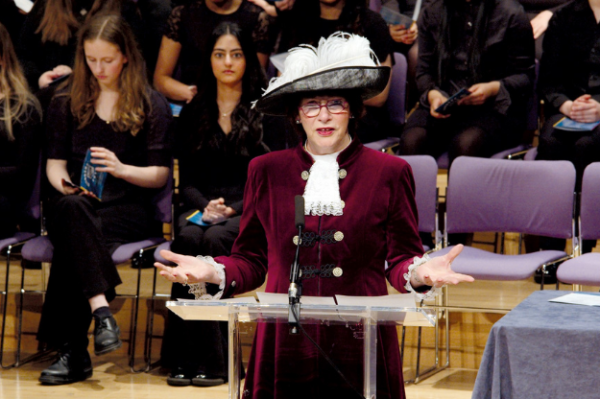 Founders’ Day 2022 ended with an upbeat speech from Head Girl, Mayo Adetujoye, who stressed the importance of relationships, support, teamwork and togetherness, of the need for resilience and for making the most of all opportunities. “We can bounce back better and stronger. Let us be resilient, let us never give up on our dreams and let us look out for one another and support each other because we can accomplish so much more together.” 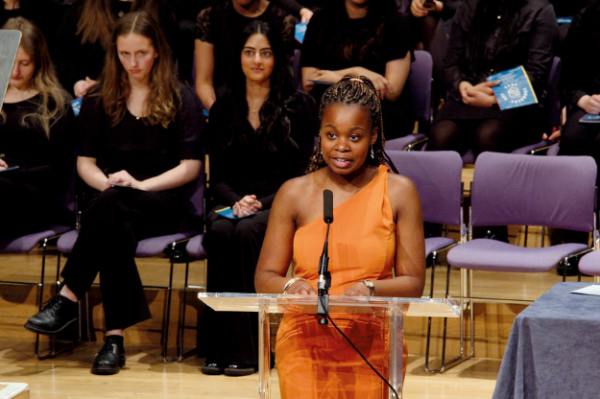 There were outstanding performances from the Senior Choir, who led the first whole school rendition of the school song Gaudeamus in over two years. There were readings beautifully presented by Alice Poole, Upper Sixth, and Nitika Banerjee, Maria Khan and Paavana Sugumar, Upper Fourth pupils.