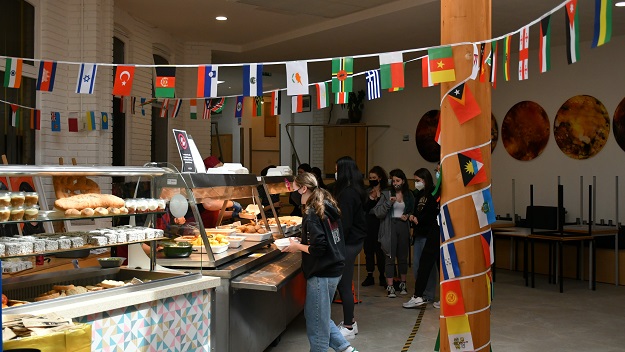 I was delighted to organise and share in another Citizenship Day at Withington – one of the highlights of the school year. This year’s focus was equality, diversity and inclusion. The day highlighted to pupils that equality, diversity and inclusion are  interconnected concepts. Equality is about being equal, especially in status, rights, or opportunities. Diversity is about representation or the make-up of entity. Inclusion is about how well the contributions, presence, and perspectives of different groups of people are valued and integrated into an environment. We are very fortunate here at Withington, where many different races, nationalities and identities are present, and the perspectives of different groups are valued. We may be diverse, but we strive to be inclusive and treat each other as equals. The day centred around creating greater multicultural awareness, increasing understanding of sexual equality, as well as celebrating diversity and inclusion to prepare students to thrive in a diverse world.

We were delighted to be joined by several guest facilitators and speakers. Pupils in Years 9 to 13 were joined by Laura Bates, founder of the Everyday Sexism Project. Laura has established herself as a powerful voice for women and girls; a cause furthered by her debut novel The Burning. She is now an established feminist writer for publications including The Guardian, The Times and The Independent. Her writing covers numerous issues, including the gender pay gap and sexual abuse in schools. She was named one of Huffington Post’s Most Inspirational Women of 2012. Her talk was informative, thought-provoking and inspirational. Staff and pupils alike were spell-bound by her presentation which certainly tuned into the experiences of sexism in society, but also gave realistic and sensible advice about how we can all make changes – our act of Citizenship against sexism. Our second speaker focusing on diversity was Louise Ishani. Louise is an experienced learning and development professional who worked as a successful primary school senior leader in Inner London before moving into learning and development and school improvement consultancy work. Louise has worked on the design and delivery of a number of programmes specifically targeted at supporting increased diversity in leadership, with a key focus on the development of women and BAME aspiring leaders. She is a Director of All-In Education, who delivered and analysed the Equality, Diversity & Inclusion questionnaire recently carried out at Withington, and therefore could draw upon its findings to ensure the messages imparted to our pupils were relevant and accurate. Like Laura Bates, Louise provided sensible, sensitive advice as to how to deal with issues such as micro-aggression and unconscious bias – our act of Citizenship against racial, and other, prejudice and discrimination.

Years 7 and 8 undertook workshops with BelEve, a girl-focused charity who believe, as we do, that it is crucial to inspire and empower girls and young women to maximize their potential and celebrate their achievements. They have created a positive organisation which empowers girls to realise their dreams, redefining what it means to be a female leader, with the support of a network of positive role models. BelEve worked with Form groups to broach the subjects of staying safe and racial  discrimination. Pupils in all years were pleased to have the opportunity to discuss and understand more about these extremely important issues. All students took part in physical activity during the day in the form of learning basic and easy-to-learn self-defence techniques which were provided by a team from Krav Maga, Manchester, with the aim of giving pupils the confidence to de-escalate or avoid potential threats and to feel safe in their daily lives.

The day was great fun, and the wonderful cookies, ice lollies and food from around the world made it even better! But you don’t need to take my word for it.

Here are just a few quotes from the pupils:

“Relevant, engaging. The whole class was captivated from the start!”

“The outside speaker was clearly very passionate about the topic matter and spoke very clearly and engaged me.”

“It was so fun while still being informative. We learnt so much, but it was still fun at the same time!”

“It was really fun learning this as I had never done anything like this before.”