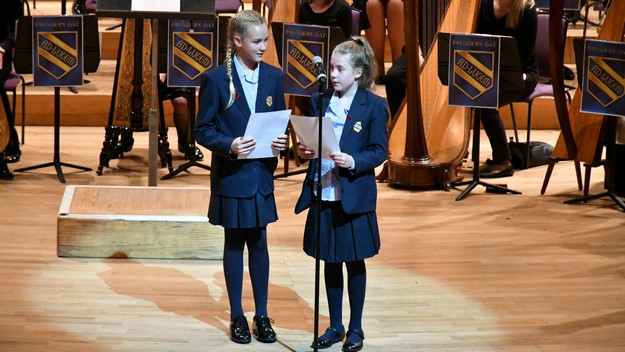 Withington commemorated its 129th Founders’ Day at Manchester’s Bridgewater Hall on 7th October with an evening of inspirational speeches, readings and musical celebrations on the theme of ‘Sustaining People and Places’. 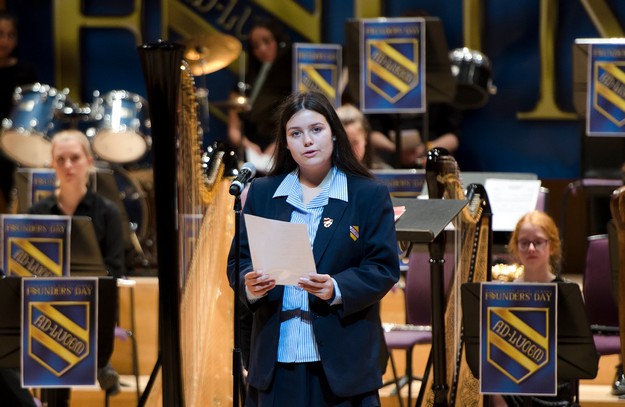 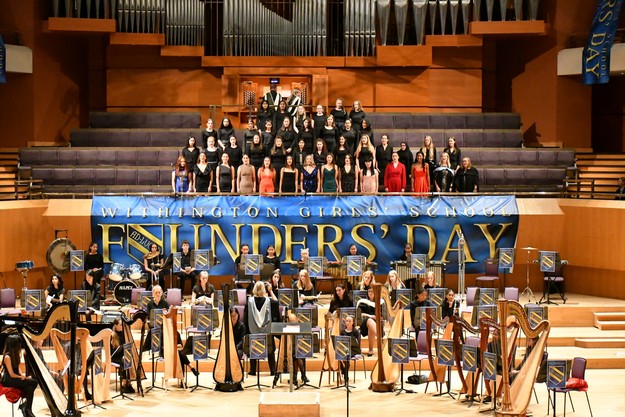 Environmental protection and plastic pollution were recurring topics during the evening’s speeches. Chair of Governors, Mr Malcolm Pike outlined Withington’s longstanding ethos in reducing negative environmental impact. The Junior School’s eco-friendly wild flower grass roof; replacement of all light fittings with LED energy-efficient lightbulbs; a compactor and blower for use in waste recycling; the appointment of an environmentally-aware catering company and initiatives by the School’s eco group to encourage good practices and reduce single-use plastics are all measures currently being undertaken.

Mr Pike also spoke of Withington’s sustainability as a School for future generations. Paying tribute to the founders and Withington’s heritage, he pointed to a community in which it has always been “cool to learn and do well, where the pleasure of learning is its own reward and where collaboration and personal challenge are the aim of every day.” Reaffirming Withington’s commitment to its bursary programme, he said that inclusion and diversity are an integral part of the WGS ethos and an essential part of the fabric of the School, with one in six pupils now in receipt of fee assistance. 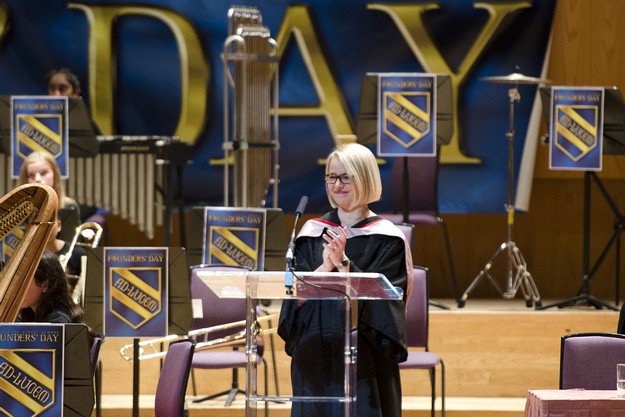 Headmistress, Sarah Haslam, explained how this year’s Founders’ Day theme ‘Sustaining People and Places’ encapsulates many of Withington’s priorities. “It’s important to recognise that we are all part of something bigger and have responsibilities to our school, our city, our world,” she said. Praising guest speaker and alumna Dr Caroline Major for her “awe-inspiring” paddle-boarding venture across the UK and for her dedication in raising awareness of plastic pollution and the plight of our rivers, seas and oceans, she said that she justly deserved recognition in the recent Independent newspaper’s ‘Happy List’, celebrating 50 of the most inspirational people whose kindness, ingenuity and bravery have made Britain a better place to live.

One of the most important aspects of a Withington education, she said, is helping girls to develop the knowledge and skills, attitudes towards learning and personal qualities that will sustain them through their future lives; an approach endorsed by a recent whole-school survey in which pupils’ confidence, quality of teaching, pastoral care and extra-curricular programme, community spirit and community activity were all highlighted as particular strengths and deemed ‘Exceptional’ by an objective external source.

Community involvement is also integral to life at Withington, said Mrs Haslam. Citizenship Day had included a Lion King Junior production for local senior citizens and a ten-mile sponsored walk which raised over £10,000 for The Christie, part of the £32,000 raised last year by Withington for charities. A visit in March by Mayor of Greater Manchester, Mr Andy Burnham, also highlighted Withington’s community work including the WGS Saturday morning SHiNE programme, which enables local state primary pupils to take lessons at Withington in subjects they would not otherwise be able to experience. 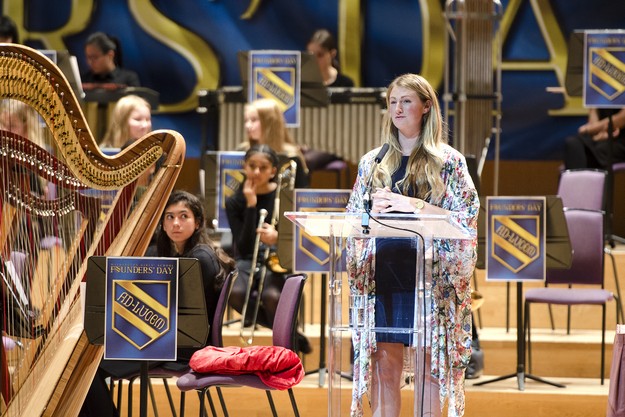 In keeping with Founders’ Day tradition, guest speaker – Dr Caroline (Cal) Major – presented each Upper Sixth member with a book of their choice before addressing the audience. Her story was captivating as she told how, after leaving Withington in 2006, she went on to become a veterinary surgeon, an ocean conservation advocate, adventurer, world record paddle-boarder and people’s champion against plastic pollution and waste. An ocean lover, she had been struck by the plastic waste on every beach she visited along the UK coastline, prompting her to run community beach cleans. Then, to raise awareness of the plastics problem, she undertook paddling expeditions around the Cornish coast and the Isle of Skye before accomplishing a world record-breaking 1000-mile solo paddle from Land’s End to John O’Groats, picking up plastic and encouraging those she met to use refillable water bottles instead of a single-use plastic one. 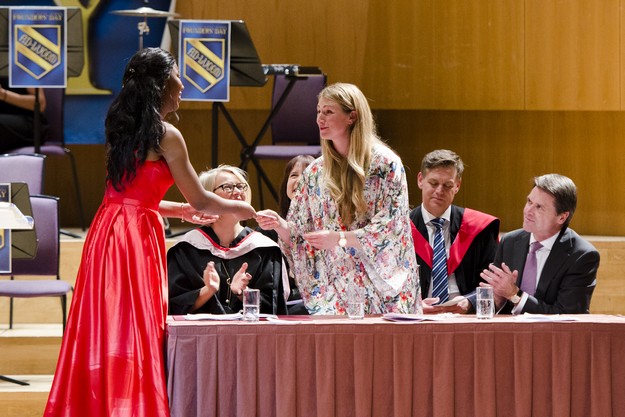 In the final speech of the evening, Head Girl Kea Bell spoke of her own personal journey at Withington, drawing on quotes from Kung Fu Panda, as well as from Michelle Obama to emphasise the many benefits of her School experience. A quote from ‘Master Shifu’ – “If you only do what you can do, you will never be more than who you are right now” – prompted Kea to reflect on individual growth “through the new skills, passions and dreams we discover whilst here,” whilst a quote from Michelle Obama – “The only limit to the height of your achievements is the reach of your dreams and your willingness to work hard for them” – had taught her “that nothing is too big to strive for”. 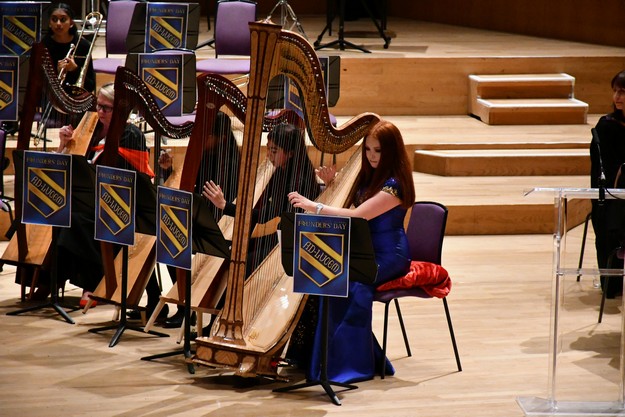 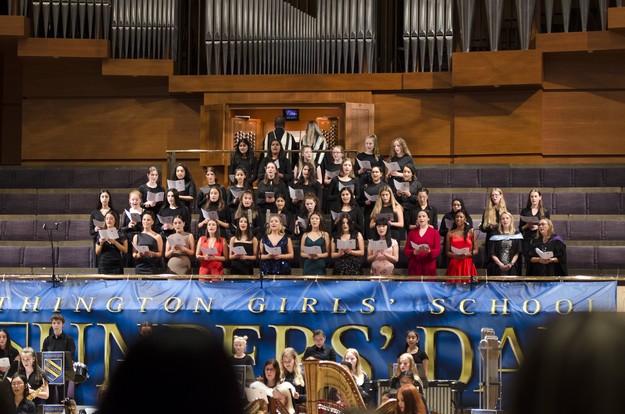 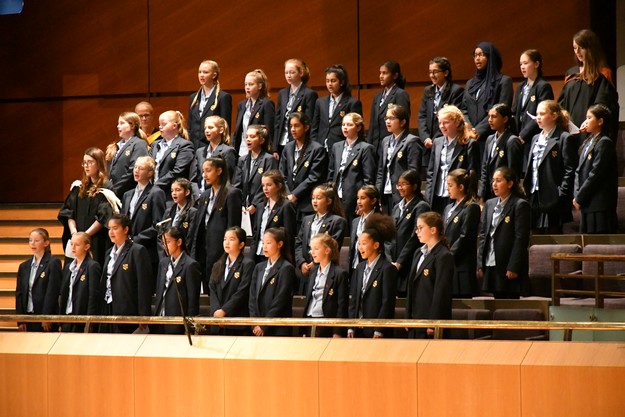 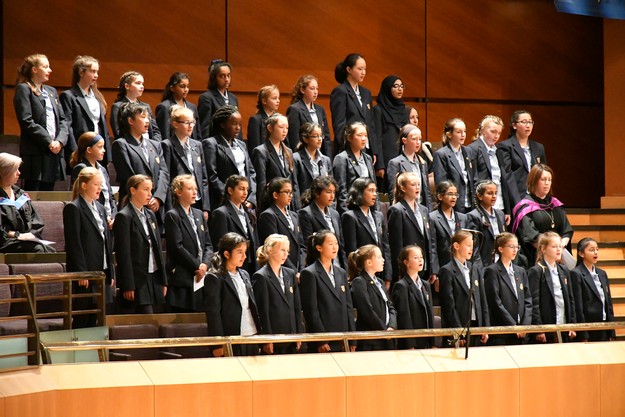 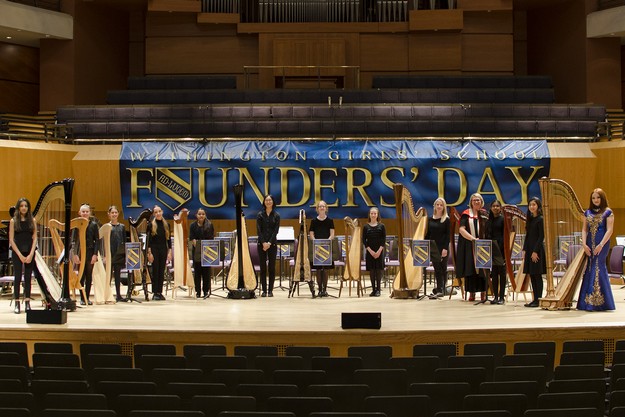 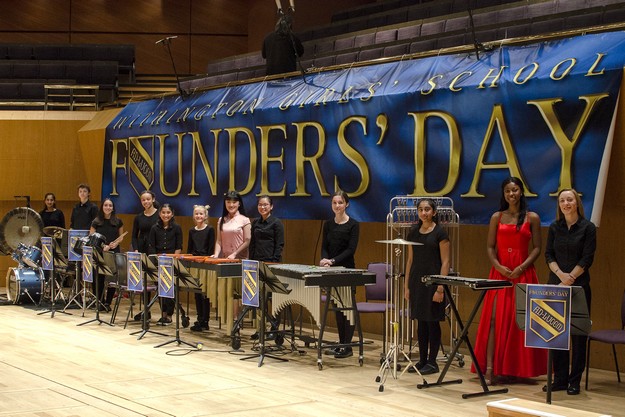 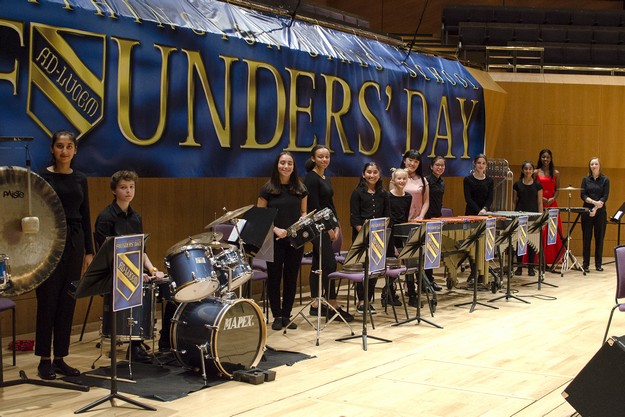