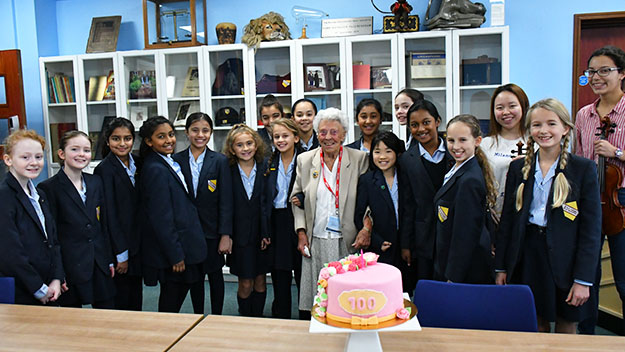 For many alumnae their first visit back to Withington after leaving can be sometime later, but we think there may not be many who return after a gap of over 85 years!

Alumna Marjorie (née Lofthouse) turns 100 years old this year and to celebrate wished to come back to Withington where she attended school in the early thirties.

Last Tuesday we were delighted to welcome her, along with her two daughters. A group of girls from Upper II in the Junior School, accompanied by Senior School musicians, surprised Marjorie by singing ‘Happy Birthday’ and presented her with a beautiful birthday cake created by Julie in our catering team.

Marjorie and the Junior School pupils then spent some time comparing notes on their different experiences at school. She was very pleased to hear that lacrosse was still played at Withington, a sport that she had enjoyed. She also confessed to not liking History very much when she was at school.

The girls were extremely interested to hear all that she had to say. Having been invited to share her birthday cake, Marjorie told them all about her time as a ‘plotter’ for the WAAF during the Second World War. This involved listening to instructions over her headphones in the map room and moving the aircraft pieces around the large map accordingly. This was then used to inform the movements of fighter planes in protecting British bombers.

Marjorie also had an interesting time reading her old school reports which Hannah Brown, our archivist had searched out for her. She was also very pleased, on a tour of the school, to see the Gym, the very same one in which she had participated in lessons whilst here. 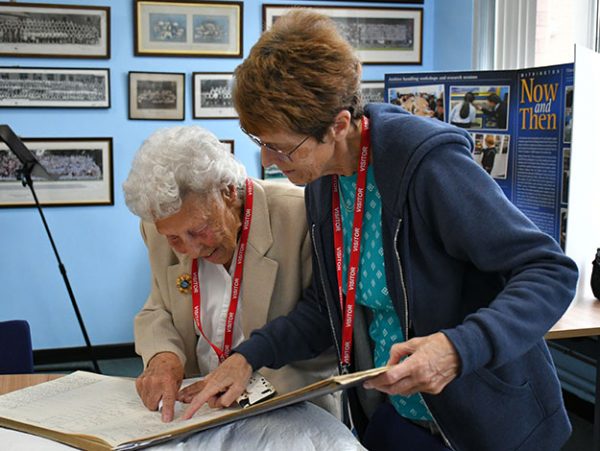 It was lovely to meet Marjorie and we very much hope that she will visit us again soon.