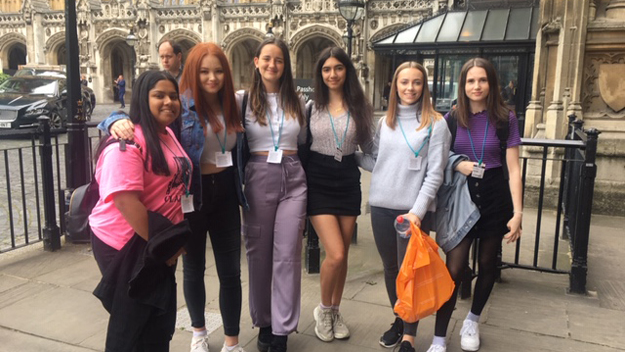 The annual visit for Year 12 Politics and Government pupils to Parliament and the Supreme Court took place on a sunny June day. Upon arrival in London, we walked to first see 10 Downing Street, the residence of the UK Prime Minister.

We then arrived at Parliament’s Education Centre, from where we continued to our tour of Parliament. As it was a Wednesday, we were able to watch part of PMQs, which was an interesting discussion about mental health provision in the UK. PM Theresa May was not present as she was in Portsmouth attending an event with Donald Trump!

As we wandered around the corridors of power, there was a really intriguing atmosphere, and a feeling that we were visiting at a time of great significance, just before the start of the leadership election for the Conservative party. Dominic Raab walked alongside us and we were very excited when Michael Gove said hello as he waited to attend a Select Committee hearing.

We were also able to attend an Education Department workshop about the UK debating and legislative process – recreating a debate about environmental issues in the UK.

Later, we crossed Parliament Square to the Supreme Court, where we had a guided tour of the main court and were even able to try out the sear where the Supreme Court judges sit during hearings. We were then lucky enough to catch the end of a hearing in another court where Lady Hale, President of the Supreme Court, was presiding – always a pleasure to see a powerful and articulate female in action.

It was an informative and educational day out and thanks go to the Year 12 students and to Mrs Hamilton.