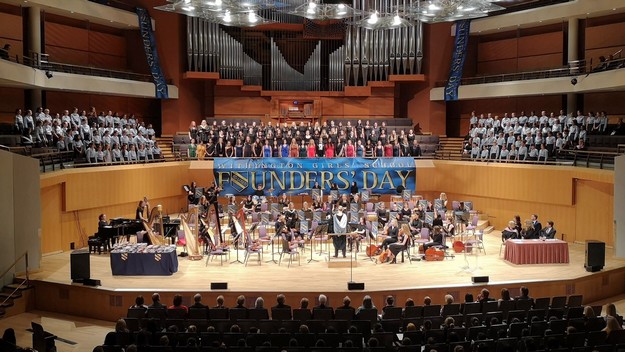 Dreams and Discovery  was the theme for Withington’s Founders’ Day Celebration as the School community, joined by invited guests, enjoyed an uplifting evening of speeches, readings and music at Manchester’s Bridgewater Hall. The School was celebrating 128 years since its foundation in 1890. 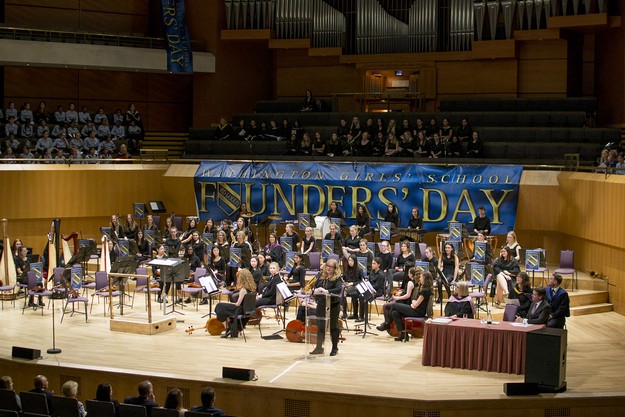 Chair of Governors Mr Malcolm Pike, Headmistress Mrs Sarah Haslam, Guest Speaker – distinguished neuroscientist and WGS alumna – Dr Kirstie Whitaker, and Withington’s Head Girl Florence Bradshaw all delivered inspirational speeches, capturing the essence of this year’s theme and reaffirming the value of an holistic education, preparing girls for life beyond School, instilling in them a sense of self-belief and empowering pupils to ‘dare to dream’.

The many positive sentiments expressed throughout the commemorative ceremony were also echoed in a collection of readings beautifully presented by pupils from across the year groups. Withington’s talented musicians once again rose to the occasion, with outstanding performances that included a rousing finale by the Senior Orchestra of a medley from The Greatest Showman, ending with an exhilarating arrangement of This is Me.

The WGS Senior Choir sings ‘You Will be Found’. Music and Lyrics by Benj Pasek and Justin Paul, arranged by Mac Huff. Conducted by WGS’ Director of Music, Mrs Gillian Sargent

In keeping with Founders’ Day tradition, one of the highlights of the night was the gift of a book of her own choice to every girl in the Upper Sixth, presented this year by Dr Whitaker, who shared with the audience the title of the book she had received when she had walked across the stage in 2000: Icons of the 20th Century; 200 men and women who made a difference.

Chair of Governors Mr Malcolm Pike commenced the evening’s speeches with a tribute to Withington’s farsighted founders whose dream, he said, was to open a school that would provide their daughters with the same educational opportunities as their sons. Their vision and principles live on today, “in a way which is appropriate to the 21st century”, he said. “Withington is a community with core values of respect for oneself and for others and integrity in its teaching and learning, dedicated to achieving not just academic success in which it more than excels, but more importantly delivering an education in its widest sense. In helping its girls to have confidence in ideas and imagination and instilling in them a sense of the bond and worth of being part of the Withington family, Withington gives each of them a firm foundation for meeting and embracing the challenges and opportunities that lie ahead.”

Mr Pike added that one of the dreams of today’s Board of Governors has been to provide the infrastructure and facilities that would continue to match and complement the high quality education available; a vision that has resulted in an ambitious fundraising and building programme. Over the past four years, development projects have included new science rooms, a new Junior School, a central hub, which is now the ‘beating heart of the School’ and most recently, Withington’s new sports complex, which has provided a state of the art gym and other sports amenities for all to enjoy. But, it was also important, he said, to realise a dream that would be supported by the School’s founders, which is to ensure that the same high-quality education and opportunities are available to all girls of exceptional ability, irrespective of the financial wellbeing of their parents and families. 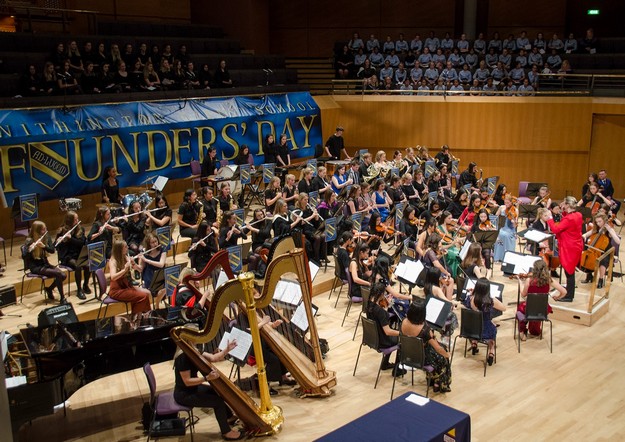 Mrs Haslam began her speech with a quote borrowed from athlete Gail Devers who battled through illness to become an Olympian and whose motivational comment has pride of place on a wall of the School’s new Sport and Fitness Centre: ‘Keep your dreams alive. Understand that to achieve anything requires faith and belief in yourself, vision, hard work, determination and dedication. Remember – all things are possible for those who believe.”

If ever there was an example of aiming high, thinking big and of daring to dream, and of the power of self-belief, a series of wonderful events held at the end of the summer term was it, she said. Uplifting and exhilarating events had included Withington’s tenth Model United Nations Conference; Citizenship Day; the Junior School’s inventive production of ‘Alice in Wonderland’; three simply outstanding performances of ‘The Phantom of the Opera’, involving over 100 Withington pupils; and Dame Sarah Storey’s visit during the Festival of Sport to open the fabulous new sport and fitness facilities. Dame Sarah, she added, had inspired us all with her message: ‘Try to be the best version of you’.

Mrs Haslam also praised a film, Ad Lucem (the school motto meaning ‘Towards the light’), produced by the School Council to celebrate the opening of the new sports centre. Alluding to its theme tune, It’s a Kind of Magic, she said that in the creation of the film, that very special Withington magic was in evidence: “Such is the quality of the relationships here, the commitment, vision and skill in our community that we really can create and achieve wonderful things together.”

As the Upper Sixth cohort prepare their university applications, Dreams and Discovery are positively encouraged and openly discussed – and on academic achievement Mrs Haslam spoke of the School’s phenomenal public examination results with 91% of GCSEs achieved this year at grades 7-9 and 91% of A Levels at A*-B with an exceptional 43% A* grades, “all this at a school where there are no scholarships, no academic prizes and the emphasis instead is on collaboration, empowerment and the love of learning as its own reward,” she told the audience.

Withington’s founders had understood the value of knowing how to learn and being motivated to do so. “Being creative and curious about the world, being responsible and caring, prepared to dream and to take the initiative – these qualities are as important as ever in our modern world,” said Mrs Haslam.

“The Founders lit the lamp of service and created a school which kindled the fires of intellectual curiosity and social responsibility in its pupils. In our digital age when we can find that it is all too easy to surround ourselves only with views and ideas similar to our own, this emphasis on debate, discovery, critical thinking and empathy is as important as ever.”

Mrs Haslam ended her speech with a quote from Mrs E W Barnes, daughter of the school’s first Chair of Governors and guest speaker at the 1946 Founders’ Day celebration, who had encouraged the listening girls at the time: ‘The future depends on you. That means on the character of each one of you.  Ad Lucem, yes, but only if you keep your eyes open and your spirits free.’ These words resonate with us today – and just as it has for 128 years, Withington will continue to make the ideals of dreams and discovery possible.” 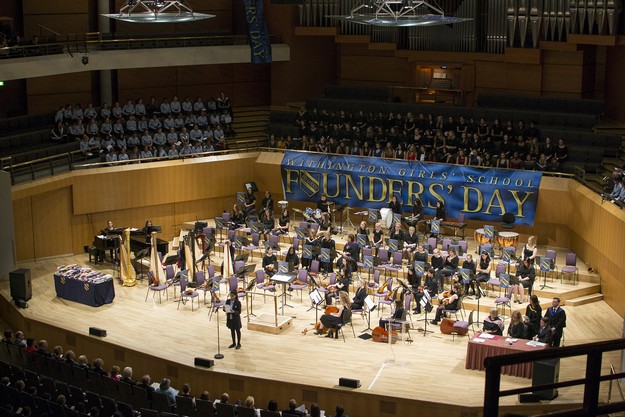 Following the presentation of Founders’ Day books to Upper Sixth students, Dr Kirstie Whitaker, now a Research Fellow at the Alan Turing Institute in Cambridge, expanded on the evening’s theme, urging the girls to dream but reassuring them, “It’s ok for those dreams to change.”

After speaking of her studies, career and life since leaving Withington in 2001, she went on to share with the audience her own personal dream.  “I want all voices to be heard. I want every academic discipline to work together to change the world. I want all lived experiences considered and acknowledged,” she said. “I don’t want to just hear those voices. I want those voices to be leading me. I want them to shape the conversations we have in data science, neuroscience, physics, biology, the arts and humanities, politics, international relations, health care, finance, the law and beyond. It’s a big dream. And it’s overwhelming. But ultimately, I’m working on my dream. I’m taking tiny baby steps towards my dream.”

“I know it’s intimidating to be told that you have to make a difference. But you do. And you will. So rely on your friends. Take inspiration from them. Travel the world to find your tribe. Reinvent yourself when you need to. And take care of yourself.  Don’t let anyone stand in your way. And try your best not to stand in your own way,” she added. 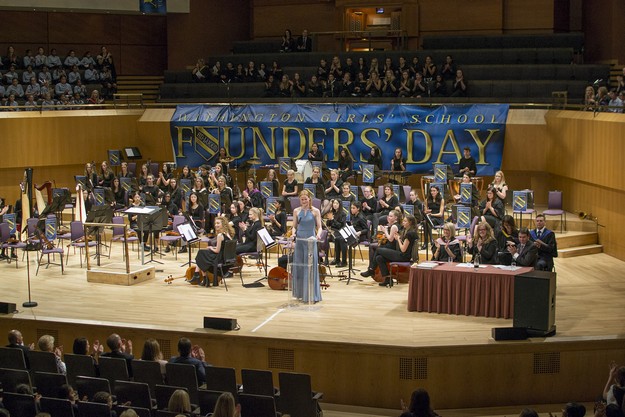 Withington’s Head Girl Florence Bradshaw rounded off the Founders’ Day speeches with her own anecdotes and thoughts on Dreams and Discovery.  She told how the children’s book Topsy and Tim Go to Hospital had inspired her at a young age to want to be a Doctor, a dream she has continued to nurture throughout her Withington journey.

Her own experience on joining Withington in Upper Fourth was of a warm and supportive environment in which girls are able to develop and flourish.  “I have been encouraged by friends, subject teachers, form teachers and heads of year, to follow my dreams and to become the best version of myself I can be. I have learnt that it is okay to be eager to learn and discover more about a subject you love and this will help you on your path to realising your dreams,” she said.

Encouraging girls across the School to take advantage of the countless extracurricular opportunities available so that they may discover something new about themselves or find a new dream to chase, she said, “To all the year groups who are dreaming and discovering, being at Withington will assist you to achieve anything that you can ever want to.”

To illustrate her point, she highlighted a quotation from Mark Twain’s The Adventures of Tom Sawyer: “Twenty years from now you will be more disappointed by the things you didn’t do than by the ones you did. So, throw off the bow-lines, sail away from the safe harbour. Catch the trade winds in your sails. Explore. Dream. Discover.”

And on the theme of discovery, Florence said that regardless of their chosen future path, there are challenges and discoveries waiting for everyone.  “We leave Withington into a world that, whilst it has a myriad of serious problems to overcome, is more exciting than ever. I believe we can all play some part if we dare to dream.” 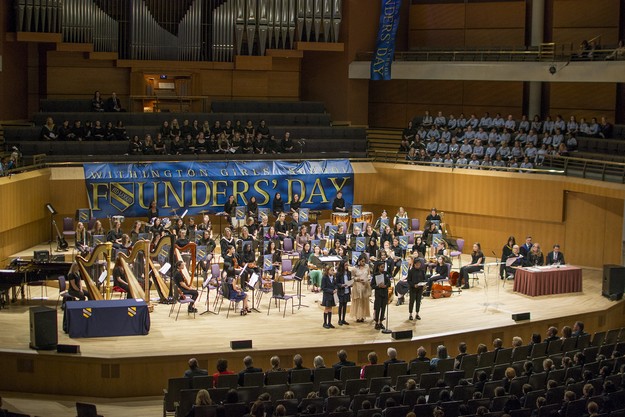