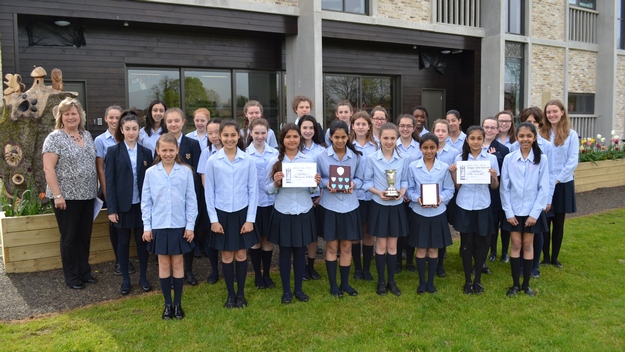 In the Festival’s 100th celebratory concert, Withington’s Voccine Choral Group made up of girls from Year 7 upwards and the Middle School Choir comprising girls from Years 7 to 9, took to the stage to compete against other local schools – and after impressing the adjudicators with their ‘good vocal technique’ and energy, they were overjoyed to score a spectacular 89-point Distinction award to take away the Rowell Cup.

The WGS Middle School Choir’s rendition of Look To This Day by Bob Chilcott was judged as having ‘a strong and energetic opening’  and it was noted that  ‘the rhythmical framework fitted very well with the piano accompaniment.’ They also performed Lake Isle of Innisfree by Eleanor Daley. The Voccine choral group performed  two songs by Bob Chilcott, Safekeeping, Spell No 4 and Bring Lost Creatures Home, Spell No 2. The adjudicator remarked: ‘You sing with ease at the audience’ with ‘a good feel and energy’ coupled with ‘a good vocal technique.’ 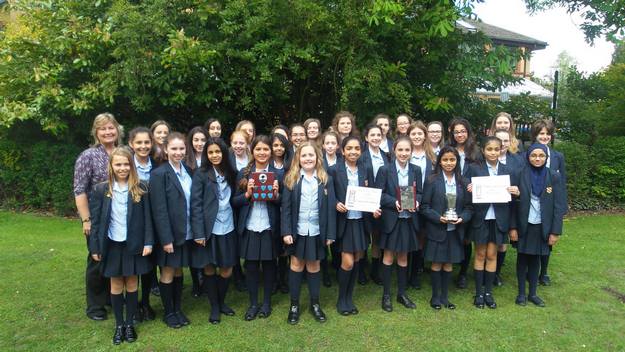 Voice teacher, Ms Fiona Clucas, herself a classically trained singer, praised the girls for their musical talent and hard work, adding it was ‘an exciting day’ for the School. “The talented Withington choristers sung their way to the top to come away triumphant. Naturally we are singing their praises!“ she said.

Director of Music, Mrs Gilly Sargent said: “ Our choral performers put their heart and souls into their music and never fail to deliver performances of a high quality. As the judges remarked, the girls are very comfortable singing in front of their audiences and that is testament to the commitment they put into choir practice, as well as the fact that they clearly enjoy their performances very much. We are very proud that on their debut entry to the Alderley Edge Festival in the face of competition from good choirs, some of whom have previously been winners, they have come away with the Rowell Cup. It is particularly poignant that this achievement has coincided with the landmark 100thAnniversary of the Festival.”

Congratulations also go to other pupils – including Junior girls –  who have won individual prizes across various entry classes. Well done to all.