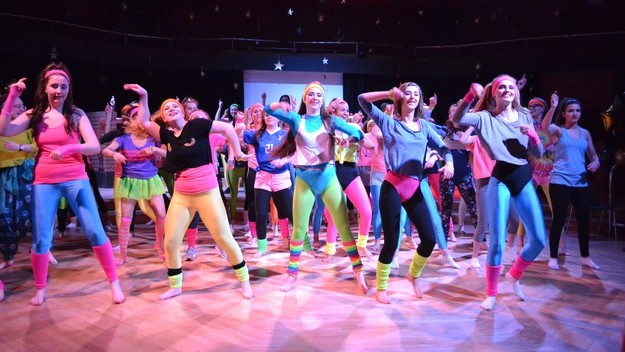 ‘Girl Power’ was the theme for the 2016 WGS Charity Dance Competition held in the Arts Centre and Hub on 3rd March. Organised by Mrs Julie Buckley and a Committee of Lower Sixth pupils, the show – involving the whole Senior School and Sixth Form – went off seamlessly and was a truly joyous occasion for performers and audience alike.

This was a unique, inclusive School event at Withington where nearly every girl and many staff were involved, working collectively to create an evening of friendly, competitive rivalry. It was about Withington having fun and showing the real spirit and ethos of our School, where we all pull together for a very special cause.

The total raised stands at £4800 with the hope of  reaching £5000. The money will be shared between three charities: the work of Doctor Claire Smithson, a past pupil of the school, who has devoted her life to working for Maua Mission hospital in Kenya; the Teenage Cancer Trust and Street Child.

In keeping with the theme of ‘Girl Power’ each Year group was assigned the music of female singers notable for trailblazing originality. Each Year 7 Form danced to the music of Taylor Swift; Year 8 to Little Mix; Year 9 to Katy Perry; Year 10 to Beyoncé; Year 11 to Lady Gaga; Year 12 to the Spice Girls and Year 13 to Madonna.

Once all the Forms had danced, the judges retired to make their decision, but the entertainment continued. A number of girls who have reached a high level in various style of dance performed individually, or in pairs. Then to the delight of all pupils in the audience a troupe of brave staff brought the house down, dancing to Gloria Gaynor’s I Will Survive and Aretha Franklin’s R.E.S.P.E.C.T.

On the judges’ return to the auditorium it was announced that Form 7Y had emerged victorious in the lower school category and the Year 12 opening dance had clinched the senior category.

Mrs Marks said: “What a wonderful experience it was witness the Dance Competition! So many girls (and staff) took part, with such evident enjoyment and clearly after many, many rehearsals! Congratulations to Mrs Buckley and the Lower Sixth Dance Competition Committee who organised the event; and our thanks go to all the families who supported it by sponsoring the programme, providing prizes for the raffle, and of course buying tickets for the event.”

Mrs Buckley said: “There was a wonderful positive atmosphere with all staff and pupils who all really pulled together as a team and having such fun. Playing hard and working hard is a great Withington combination.”