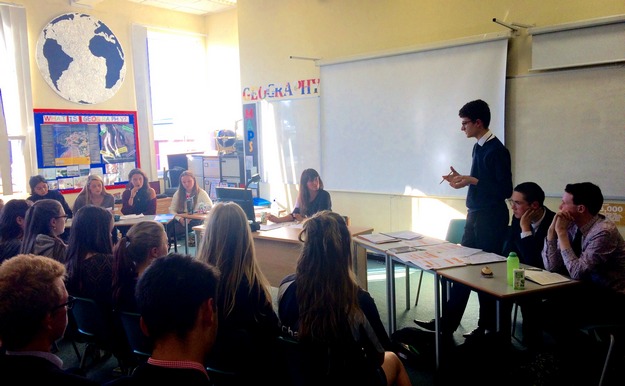 As part of the programme of the new Social Science Society ‘SOC SOC’, the Geography Department followed on from the successful Politics Lecture of the previous week and held an exciting Geography Debate as reported on below.

The Geography Department hosted a debate Tuesday evening 22nd September and invited Manchester Grammar Sixth Form Geographers to oppose our resolution. The contemporary issue was about migration. The actual topic was decided back in April.  Little could we have imagined just how the situation in Europe would explode over the summer.  Determined to sharpen our ability to argue and see another point of view Withington proposed the resolution:

‘Europe should close all its borders to new migrants’.

This certainly provided us with a challenge – even more so because of the recent emotive media reports of the plight of thousands of migrants fleeing to Europe. The relevance and application of Geography was made all the more clear to us because as we all sat in the Geography Room and opened our debate the European Commission was meeting to try and solve the allocated quotas for 150,000 Syrian migrants before holding an emergency EU Summit to discuss key issues of Aid to refugee camps in the Middle East and the problem of Greece’s weakened border. All these issues were clear points raised by both sets of speakers and it was recognised by everyone present that only Geographers with their holistic approach could explore the complexities of this current situation and fuse the many strands of the argument. 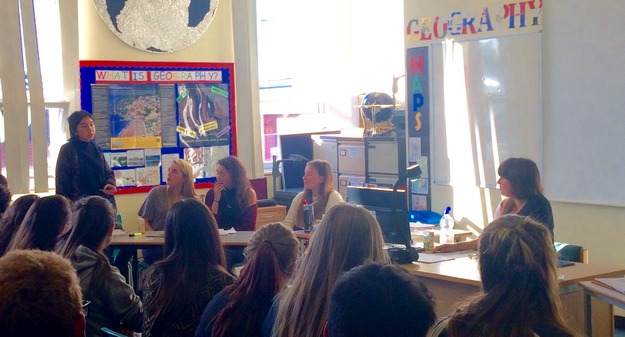 Nearly forty boys attended accompanied by Mr Wheeler the MGS Head of Geography.  It was wonderful atmosphere of competitive rivalry and with all our Upper and Lower Sixth Withington Geographers and even some from the Upper Fifth filling the Geography Room with people who really value the breadth of the subject.

Our Geography team prepared themselves well and spoke with utter conviction and supportive case study evidence. They fielded some very challenging questions from the boys but held firm in the belief that the long term sustainable approach had to involve Europe temporarily closing its borders so it could unify its members in their approach to the crisis, improve the processing of genuine asylum seekers and focus humanitarian, community aid on the refugee camps they were fleeing from. The four speakers; Flora, Sophie, Anisa and Charlotte were convincing, confident and appeared to really believe in the points they were arguing. They were passionate speakers and a credit to the school.

Hannah Buckley, a former Withington Geographer who completed her Geography Degree at Durham University ten years ago, chaired the Debate. She helped promote Social Sciences and support the launch of our new Society by increasing awareness of the potential careers that can open up from a Geography background. She used her own experience to illustrate the point. She first worked in Communications Consultancy in the West End of London, using her Geographical knowledge as an important skill especially when supporting clients where environmental implications were crucial. This had included the proposers of a controversial Wind Farm to be built off the Jurassic coast. Over this last year she took a break to complete an MBA at Cass Business School in the City of London and here the Economic strand of Geography dominated. ‘Migration’ had particularly played a part in her recent dissertation where she examined competitive rivalry in the international payments industry, an issue evolving directly from the global movement of people. Over the last four weeks she described how she had been attending job interviews for management consultancy posts and at one interview, 8 of the 10 interviewees were Geographers as were 75% of the employees. We felt privileged that she could join us as she had a week before starting her new job and apart from inspiring young geographers about where it all could lead, probably the most important message she gave the students was their need to be flexible in a world of work that is constantly evolving and the way studying Geography enables this with its range of transferable skills as well as a crucial global perspective.

There was a real buzz in the Geography Department and Manchester Grammar boys were motivated to invite the girls back, to debate yet another contemporary issue with a geographical edge. This is exactly what we had hoped for in setting up our new Society, mainly that the Social Science students would be inspired by the relevance of the subjects they had chosen to study.