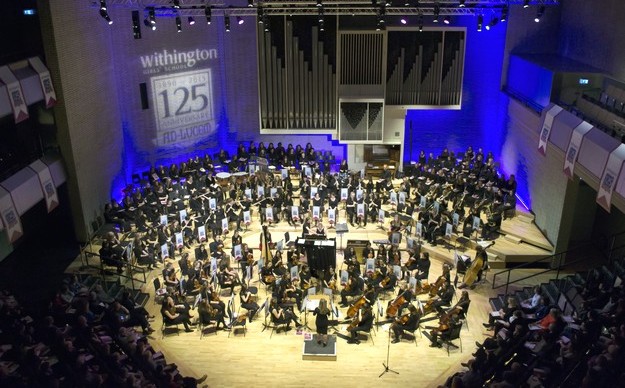 Withington’s abundance of musical talent was displayed in all its glory as celebrations to mark the 125th anniversary of the School’s foundation got underway with a spectacular Gala Concert on Tuesday 3rd March. 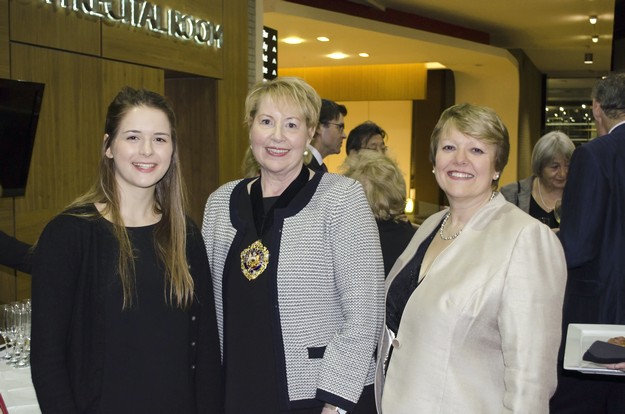 Held in the impressive setting of the Royal Northern College of Music’s Concert Hall, WGS musicians past and present showcased their exceptional accomplishments to a warm reception from a packed house which included the Lord Mayor of Manchester Cllr Susan Cooley, invited dignitaries, Governors, staff, alumnae, current pupils and friends and family. 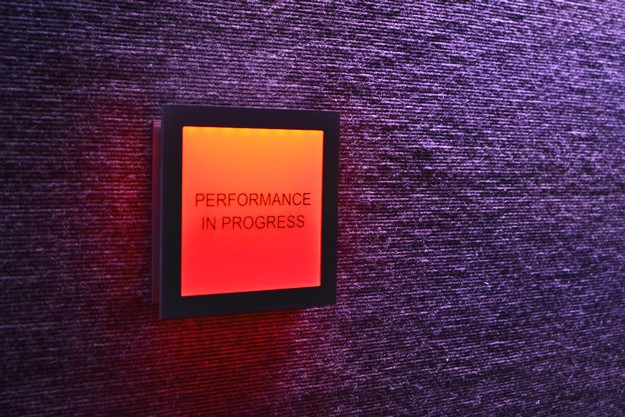 The 150 pupils who make up Withington’s choirs, orchestras, ensembles and bands – joined by WGS alumnae and staff – gave outstanding performances from a diverse range of genres and musical eras in a full and varied programme put together by Director of Music Gilly Sargent and Music Teacher Amy Holland. 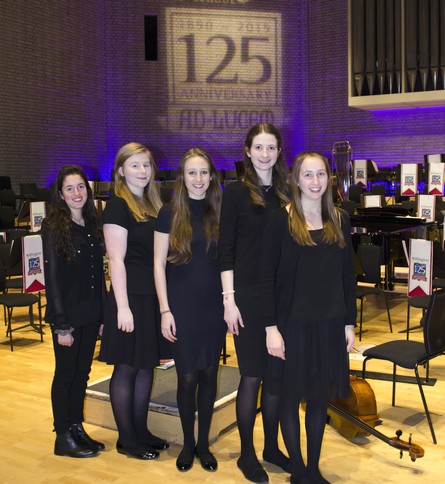 The five Sixth Form composers whose compositions were performed

Alongside works by world-acclaimed composers such as Gershwin, Copland, Holst and Andrew Lloyd Webber, pieces written especially for the occasion by five WGS Upper Sixth musicians, were included in the evening’s performances, whilst Withington’s Head Girl team gave their speeches in verse form in commemoration of this auspicious milestone in the School’s history.

Headmistress Mrs Marks described the event as a ‘truly special’ celebration of the founding of Withington, as well as a celebration of ‘astonishing musical talents’ that shone throughout the evening’s ‘immensely enjoyable and outstanding’ performances. 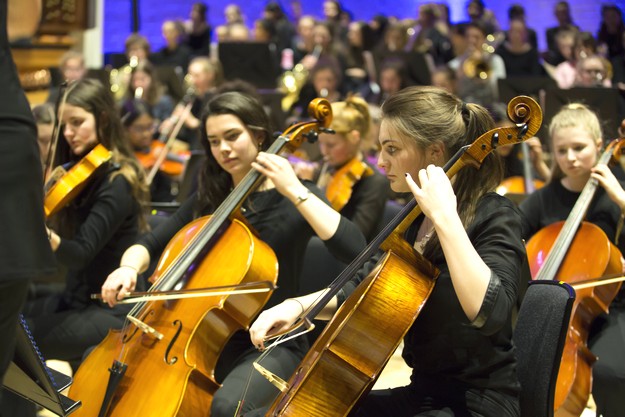 From rousing orchestral productions, which included Holst’s Jupiter, Pirates of the Caribbean by Klaus Badelt and a medley from Andrew Lloyd Webber’s popular Phantom of the Opera; to up-tempo Stage Band pieces including Lalo Schifrin’s theme tune to the spy film Mission: Impossible and Zawinul’s Birdland; and to the soft and haunting tones of the Choirs, the Concert Hall’s 500-strong audience were treated to displays of Withington’s musical excellence. 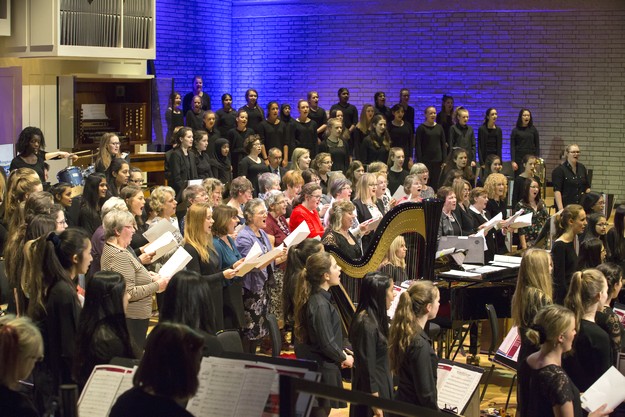 The School’s Senior, Middle School and Exam Class choirs all put in highly polished performances, including Jubilate Deo, The Lake Isle of Innisfree and Look to This Day. One of the highlights of the evening was the massed choir performance of Rhythm of Life and May It Be, sung joyously by Withington Alumnae and all 150 girls on stage. 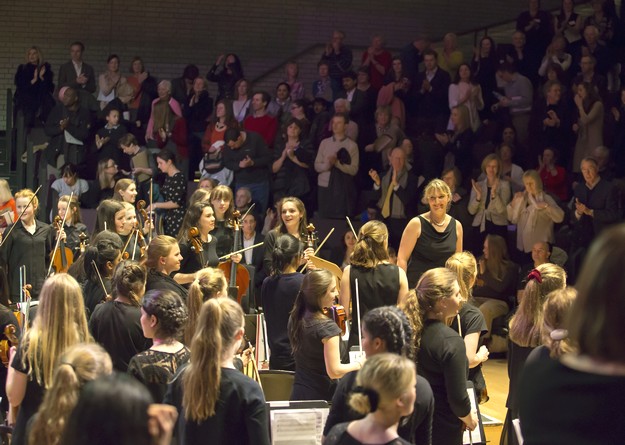 The programme was also interspersed with inspirational individual readings by pupils that echoed the era and genre of the following musical piece.

The five pieces composed by Withington girls were: Withington Anthem, a fanfare written for the Brass Ensemble and percussion; Serenade for Flute and Strings, a romantic piece written for a string quartet, flute and harp; Diversity, performed by the Stage Band, aptly-named to represent the School’s cultural diversity and featuring hymns taken from a variety of religious sources; A Capella, Music Through Time, sung by the Exam Class Choir, demonstrated the evolution of music at Withington since the School opened in 1890; and Sit Caritas in perpetuum, a piece based on a collection of Withington prayers reflecting the School ethos, was a voice and instrumental composition performed by the Exam Class Choir and the Chamber Ensemble.

Describing the performances by former Withington pupils – some of whom are now teachers at the School – as ‘moving and poignant’, Director of Music Mrs Sargent said the event was a ‘magical experience’ and would be a lifetime memory for those involved.

“Looking to the future, our Sixth Form composers were fantastic.  It’s incredible to think that at 17 and 18 years old, these girls have put so much into their work and have produced incredible pieces that were excellent in their own right but that also summed up the ethos of Withington so appropriately, given the occasion,” she said.

“In addition to their compositions which were enjoyed by all at the concert, these girls are also accomplished performers, whether that be instrumentally, conductors or soloists,” said Mrs Sargent.

“The massed choir of Alumnae and girls was just wonderful,” she said. “There was such a sense of sheer happiness and great pride in Withington as girls past and present sang their hearts out together with such gusto. It’s poignant to think that just as former pupils returned to join us in celebrating 125 years since our foundation, in another 25 years, current pupils who performed at the Concert will hopefully return in the future to join the 150th celebrations.” 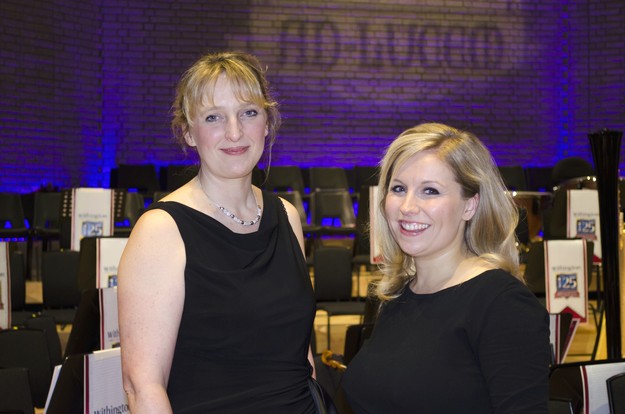 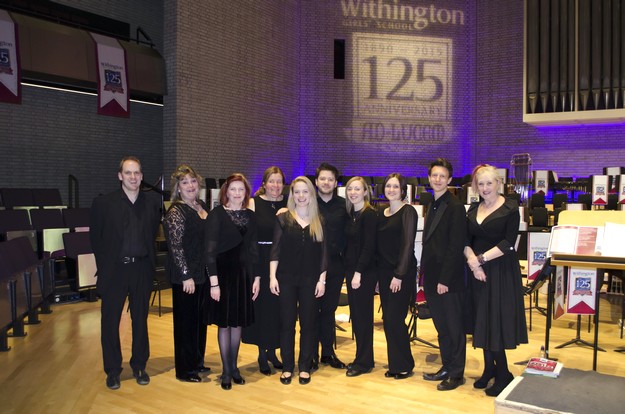 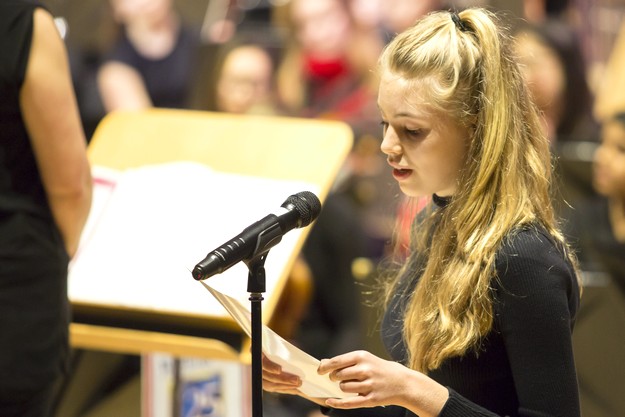 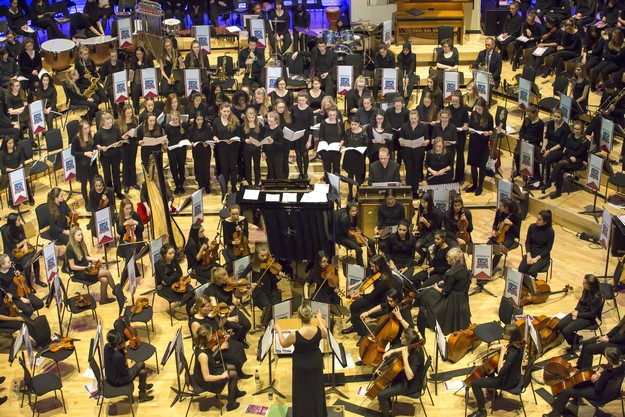 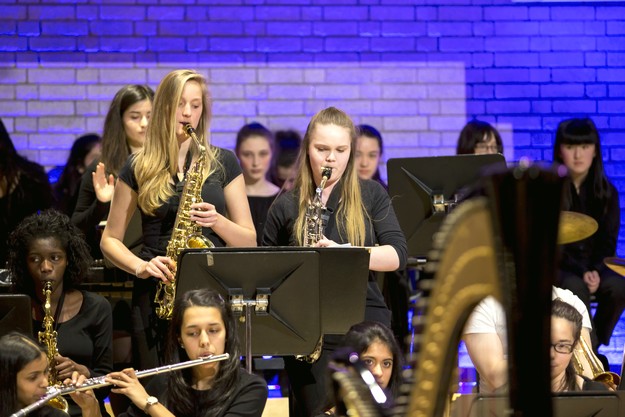 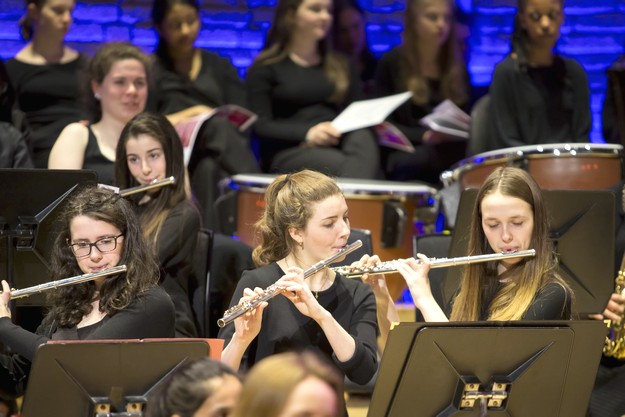 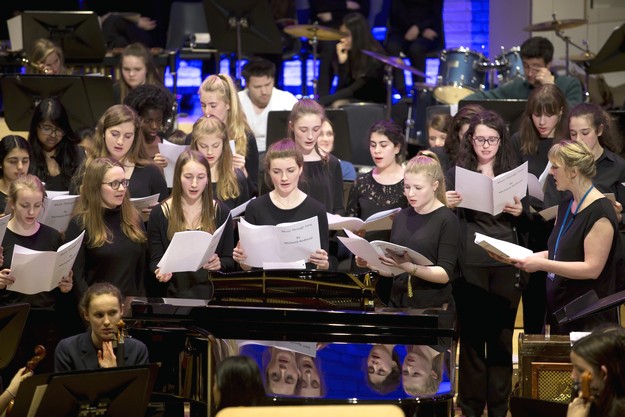