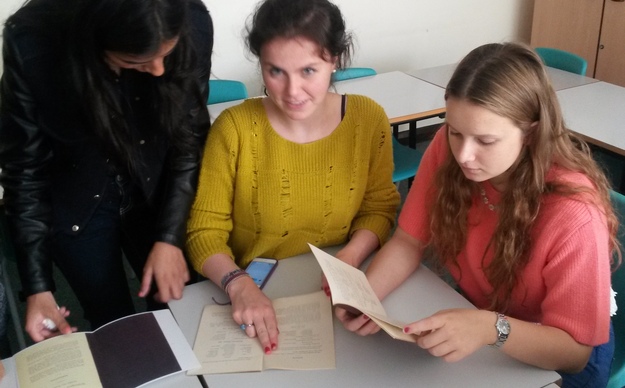 We were privileged to welcome a distinguished panel of guest speakers who gave up lunch hour to participate in this event, where the topic for debate was the popular impact of the Great War. David Morris joined us, the Head of Collections at the Whitworth Art Gallery, David curated the ‘Sensory War, 1914-2014’, currently showing at the Manchester Art Gallery. This magnificent exhibition explores how artists have communicated the impact of military conflict on the body and mind, particularly with the operation of new military technologies that began with the First World War. David provided a detailed and engaging presentation of the artwork at the exhibition. Another guest was Zoe Lambert, an acclaimed writer of short story fiction – her debut collection ‘The War Tour’ sheds light on the surviving casualties of war, and their attempts to reintegrate into society. She spoke eloquently of her short-story on Rosa Luxembourg, a revolutionary socialist active during the Great War, as well as the increasingly critical portrayal of war in literary fiction. ‘Her writing is a kind of narrative ambush’ – The Guardian writes! Zoe is also a lecturer in Creative Writing, and is a dedicated campaigner for the rights of asylum seekers. Josh Butt joined us from the People’s History Museum, where he is a curator of exhibitions. Josh’s area of expertise is wide – he has previously delivered a talk on the friendly between the Scottish Football Association and Chile, during the regime of Pinochet. He provided a tantalising account of the museum’s exhibition. ‘A Land Fit For Heroes’, which focuses particularly on the role of women and the labour movement in the war.

Finally we welcomed Richard Preston, from the Western Front Association – an organisation, established in 1980 by noted military historian John Giles, with now over 6,000 members worldwide. Richard has already delivered presentations at the Cumbria Branch on the demand for more home grown food during the war as well as the impact of submarine warfare on agriculture. During the panel discussion he narrated his admirable endeavours to reconstruct archival records of the deceased soldiers of the Cumbrian regiments.

An issue raised in the following Q&A session was whether the war ever really ended. Poisonous gas, blood banks, conscription, Arab nationalism – the Great War leaves indelible traces on the world we inhabit today. In that sense, when discussing the popular impact of war, both the speakers and the audience turned to consider the impact on generations present and future, as well as those who have passed on.  The panel was extremely well-attended, by younger years as well as older girls, and the guests allowed us to view the Great War from new perspectives – through art, fiction and local history. A fantastic time was had by all, and the history Society Committee would like to thank Ms Maher, Head of History, with all her help in the organisation of the event.