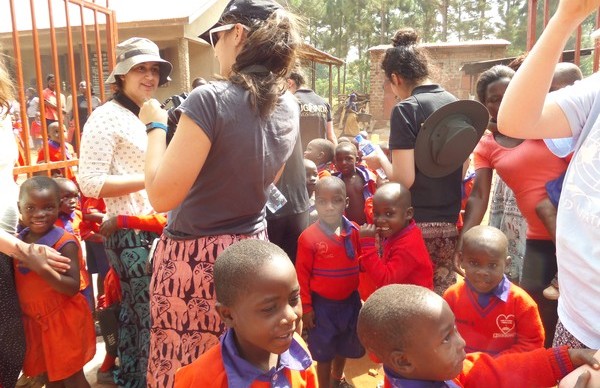 Withington’s new Uganda project was an ‘eye-opening’, ‘rewarding’ and ‘life-enriching’ experience for Sixth Formers who visited the East African country during the February Half Term break. 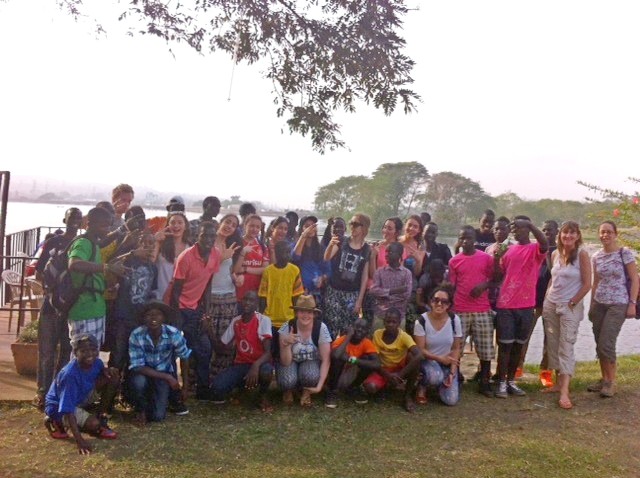 On the bank of the Nile with the GIASCO boys

The group of ten students, accompanied by Ms Jane Maher and Miss Amanda Phillips, spent nine days in Uganda – 6 days in Jinja, three hours bus-journey from Entebbe airport, with an itinerary that included visits to a Ugandan ‘WGS’ (Wanyange Girls’ School); GIASCO, a residential centre for homeless street boys which two former Withington students helped to establish; the Small Steps Glory Be Nursery, a school for children aged 3-7 which includes a special needs unit; the Home of Hope, a home for severely disabled children and finally, a baby home for infants from difficult family backgrounds -including many who have been orphaned.

Rounding off the trip the girls spent two days experiencing a short hike to the spectacular Murchison Falls, a river boat ride amongst crocodiles and hippos and a safari where they were able to spot a wide variety of African wildlife, including elephants and lions.

Ahead of the Uganda visit the girls had raised almost £5,000. This fund enabled them to purchase a cow, named Rachel by the Nursery children, which will ensure a supply of milk for the Glory Be nursery. In addition the nursery also received toys, stationery and First Aid equipment and a giant parachute – and the girls also spent three afternoons there painting and renovating the gate posts and latrine block. A computer and a much-needed fridge were donated to GIASCO as well as sports equipment and T-shirts, which the girls helped them to design. Wanyange Girls’ School also benefitted from sports equipment and T-shirts as well as a variety of science equipment including stopwatches. Toys and sensory items such as space blankets and rattles were delivered to the Home of Hope, with toys and baby formula being left for the baby home. 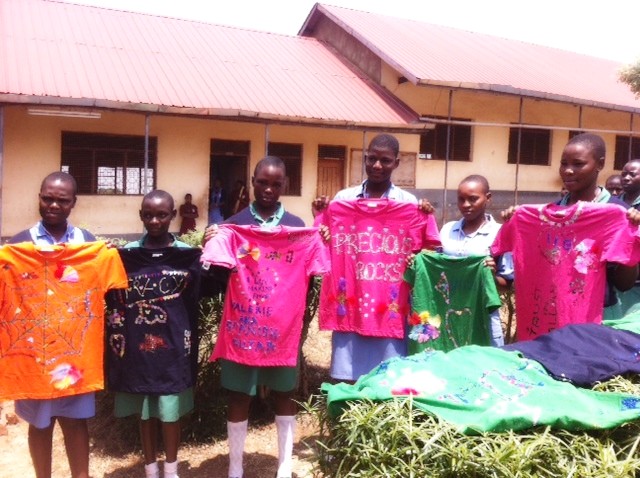 ‘WGS’ Uganda girls with their T-shirts

The 2014 trip stemmed from a visit to the country last year by Ms Maher who says she was drawn to Uganda by the experience of two Withington alumnae, Liberty Bridge and Olivia O’Malley [2009 leavers]. Both had been in Uganda on a gap year when they had come across boys – many of whom were orphans – living rough on the streets, some, sadly addicted to paraffin. They were determined to help and were instrumental in helping to establish the charity GIASCO (Get Involved with African Street Children), of which they are both still trustees. 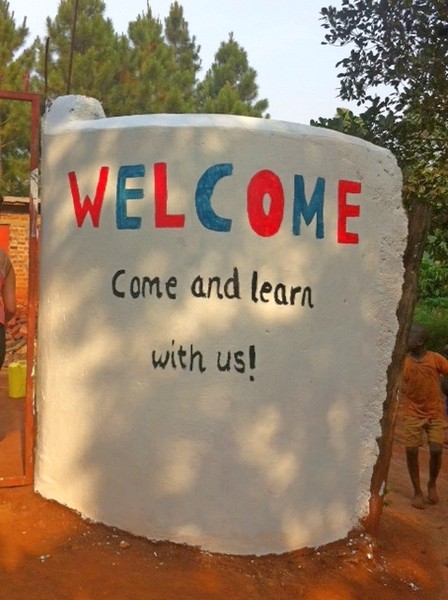 Warm welcome at the Glory Be Nursery !

Another former pupil of Ms Maher’s, Cat Dunlop, formerly at Cheadle Hulme School, was responsible for establishing the Small Steps Foundation and the Glory Be Nursery, which the group also visited.

Said Ms Maher: “For our girls to see another world as they did in Uganda is most definitely a life-enriching experience. Some of the visits were very sobering and difficult places but I couldn’t have asked for a better team to travel with. Their company and their commitment was fantastic.”

With 13 girls already signed up to join the Uganda project next year, Ms Maher said: “I hope this is the first of many visits – and it’s extra special because this is a trip that has strong links with former pupils of Withington and with the school itself.”

Our girls speak of their Uganda experience:

“My trip to Uganda was a sobering experience that still sits at the forefront of my mind. It’s one thing to hear about how people on the other side of the world live, but it’s another thing to witness it yourself. One thing that I’m now very keen on is being strict with not wasting food and that’s all thanks to the trip. Aside from that, the team was all that I had hoped for – everyone was so supportive and we all got along so well. I can now say that I successfully completed what I set out to do when I first joined Withington and watched all the sixth formers’ assemblies on similar expeditions, and I’m very thankful to Ms Maher and the school for giving me this opportunity.”

“The trip was an amazing experience, that although often challenging, opened my eyes to a world so different to my own and, along with the team, I can’t wait to start fundraising for many of the projects that we helped whilst out there.”

“The trip to Uganda was an extremely rewarding experience that gave me the opportunity to meet children that had lived through such hardships. I definitely hope to return to Uganda soon and volunteer with more of these worthwhile causes.”

RACHEL: ‘On our first full day in Jinja we were so excited to go and spend a day at Wanyange Girls’ School, especially because we shared school initials (WGS)! In the heat of the day we felt somewhat shy and intimidated on our first experience with Ugandans, but soon relaxed and then we met a Form 6 class (equivalent to Upper Sixth) before having a quick break. Finally it was time to start the activities we had organised. First up was t-shirt designing with the older girls. They quickly became very involved and the glitter was definitely a big hit! Ms Maher and Miss Phillips were given the honour of choosing the winners amongst the group.’ 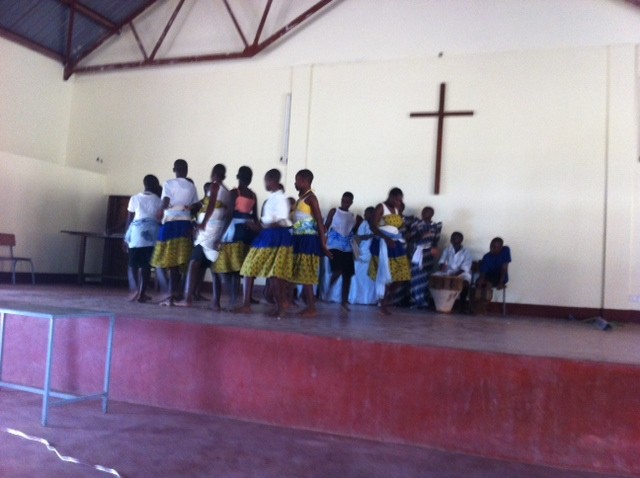 NADIA: ‘After lunch, we were treated to traditional Ugandan dancing by the girls. The audience was hard to tame and many of us sympathised with the poor head teacher attempting to control the crowd, but she was barely heard through the excitement. The dancing then commenced and it was thoroughly entertaining, with the audience participation of cheering and whistling adding to the performance and providing a great taster for African culture.

We were then set to give a rather improvised presentation about our school to Form 6. We explained things ranging from snow to lacrosse and passed photographs round to illustrate these things. After our mini presentation we were given the opportunity to branch off into groups with the girls, giving us the chance to have more one-on-one time with them. We discussed school subjects and future aspirations for university degrees and careers and we were delighted to find medics, architects and the like were also present at the Ugandan WGS.’

RACHEL: ‘We then braced ourselves for what was clearly going to be the biggest challenge of the day – netball against the Wanyange Girls in the intense Ugandan sun. We had barely acclimatised to African heat but nevertheless, we assigned ourselves a team of netballers to take them on. We were quickly debriefed with the Ugandan style of playing and before we knew it, we were off. Our team was strong and we played to our best strengths and the end score revealed that they beat us by one point. We then swapped a few people round and put together a team of volleyballers who were feeling strong after our successful netball match. However, we were quick to learn that volleyball was far from a strong point, with barely any of the team members knowing the rules and how to play. This was evident as our attempted rallies were non-existent and in order to get a game going we needed to exchange a few of our players for some Wanyange girls. Hannah proved to be an entertaining player as she courted many cheers when it was her turn to serve. One of the Wanyange teachers even approached Tash and exclaimed: ‘Do you think she is not able to see without her glasses?!’.

NADIA: ‘The last thing left to do was the relay race, which, despite our best efforts, was a little unsuccessful and quickly went awry. With so many girls it proved difficult to control and we ended up calling it a day. It may not have gone to plan but everyone enjoyed it.’

SYMRON: ‘On Sunday, we arrived at GI ASCO (Get Involved African Street Children) and were immediately greeted by 23 teenage boys. Their complex handshakes took some time getting used to. We then had a tour of the building by Sarah and Gerald, who are in charge of the project, as well as learning about the aims of the organisation. We learnt about the boys’ difficult past, living on the streets, including their use of paraffin and other substances as a drug. Many had lived in rice sacks as their only form of shelter, only to be tied up and beaten by the police. They often carried a razor to cut themselves out of the sacks when the beatings occurred. Many of them had spent nights in jail, as being a Street child is illegal’

TAMI: ‘Without the help of ASCO these boys would still be living on the streets.  However many of the children are doing much better at school with 3 of them waiting for their GCSE results in the week that we went and ASCO is looking for sponsors to enable one boy to go to university. We started with T-shirt decorating. Football proved to be a popular design with many of the boys supporting English football teams. Others were keen rappers and ‘young dust’ and ‘young money’ were some of our favourite nicknames.’

SYMRON: ‘For lunch we were treated to a very large portion of posho and beans and Rachel, as usual, helped everyone polish off their leftovers. The boys then gave us a show of breakdancing, eventually featuring some of WGS’ finest dancers especially Ms Maher!’

TAMI: ‘We were then treated to an acrobatics show by the boys. Using the sports equipment we had donated to the boys, the boys did relay races, but after our sporting experience at Wanyange we thought it was best just to spectate! The boys had made some beautiful crafts such as cards and bracelets, which we bought. The profits from these crafts are used as their pocket money. We then went to a restaurant for drinks and pool. Amy won the first match in an intense game but we could not keep up the winning streak for long, losing the next 3 games embarrassingly quickly! Overall, we thoroughly enjoyed the day at ASCO and it was definitely a favourite for everyone.’

HANNAH ON THE GLORY BE NURSERY

‘The main organisation we were involved with during our stay was the Glory Be Nursery, which had been set up by a former pupil of Ms Maher’s, Cat, to cater for the education of children with special needs in Uganda. 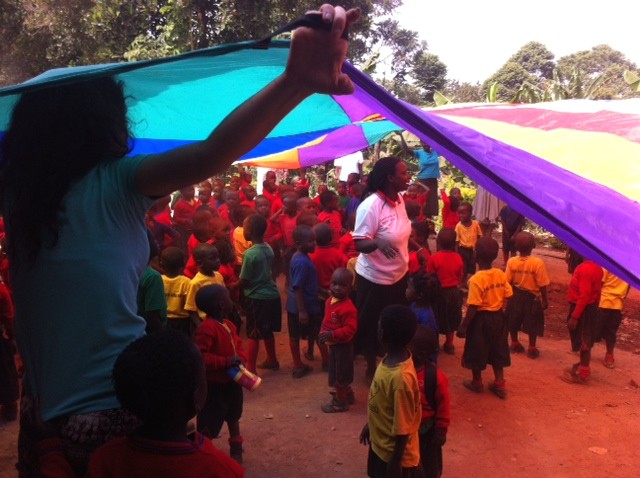 Whilst at the nursery we were involved in several activities, including painting the latrines and gates, teaching hygiene to the children and craft activities. Flower and crown making on our second day at the nursery allowed some members of the team to reconnect with their inner artist, and at the end of the day we drove past many of the children who lived locally proudly wearing their crowns outside their houses. Our dental hygiene lesson consisted of rubbing actual mud onto a dental model to represent plaque and showing the children how to properly brush their teeth, and at the end we gave each of the 200 children a toothbrush and toothpaste each. Some of the children then proceeded to brush their teeth for upwards of 10 minutes, which was hugely rewarding as it showed us that our efforts were making a difference. 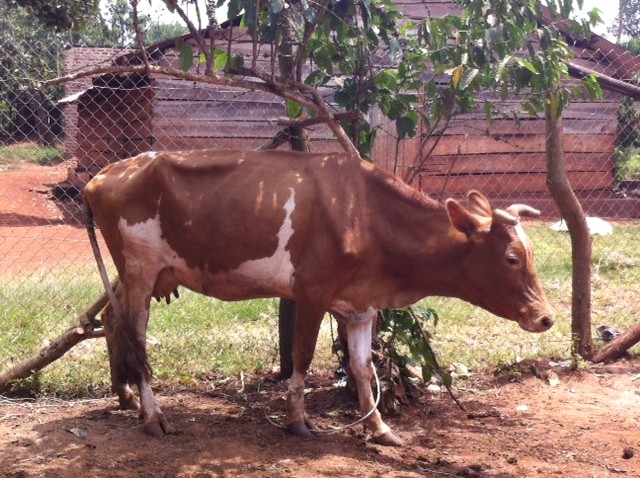 Milk ‘on tap’ for the Glory Be Children

One of the main parts of our fundraising was to buy a cow so that the nursery children could have milk in their porridge. Seeing the cow, named Rachel by the children, made us realise that our fundraising efforts – including early mornings making bacon sandwiches for golfers on Northenden Golf Course – had been more than worth it.’