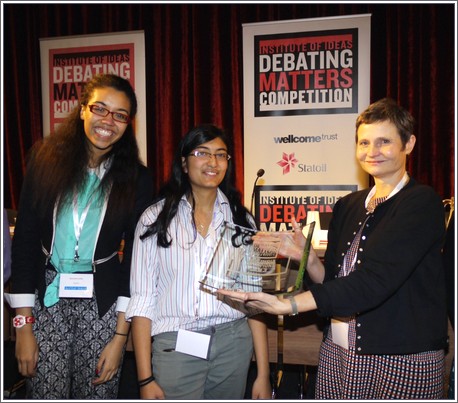 At an exciting weekend at the Battle of Ideas Festival at the Barbican in London, Withington's Senior debating duo, Samantha Cooke and Sheanna Patelmaster, have won the Debating Matters International Debating crown.


In June, Withington's Debating Team became the UK National Champions which won them the privilege of representing the UK in an International Final vs the India National Champions. Their prize also included an all-expenses-paid weekend in London attending the Battle of Ideas Festival at the Barbican –  two days of high-level, thought-provoking, public debate organised by the Institute of Ideas.

Three out of the four original team have now gone on to University so Sheanna and Samantha took up the torch for Withington and the UK.

At 5.30 pm on Saturday 19th October it was showtime and they began their battle debating in favour of the motion "Megacities are bad for the developing world" with Indian champions NPS Koramangala, from Bangalore, arguing against the motion.

After strong arguments from both sides followed by a challenging interrogation from the floor and an extremely incisive panel of judges, Withington / UK were judged to be the Champions!

Joel Cohen from the Institute of Ideas Debating Matters added: "Not only did Samantha and Sheanna give a good fight in the International Final it was great to see them on the Sunday contributing to every discussion they sat in."

The Debating Matters report of the competition can be read here. 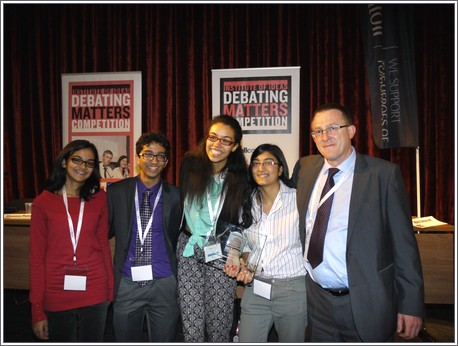 All the contenders with Debating Matters' Tony Gillard