Former Withington pupil and  international award-winning journalist, Elaine Lipworth (1975 leaver) , lives in Los Angeles where she writes about
film and entertainment. She speaks about her life in this video, and how her solid foundations at Withington paved the way to her success today.

Elaine attended Withington from 8 to 18 and spends her days interviewing stars such as Gwyneth Paltrow, Meryl Streep, Kevin Costner and Bruce Willis.

But it was her education at Withington that gave Elaine the “foundation for everything I do. Withington fostered a love of writing and research that has stayed with me until this day. I wrote a diary that began during my time at Withington aged eight years old and continue to write a diary today. So I was always writing and always researching. History and English were my favourite subjects and they were the perfect foundation for a career in journalism. I knew very clearly by the time I was in the Sixth Form at Withington that I wanted to be a journalist. So I was lucky that I found my passion at school and it all stemmed from there.” 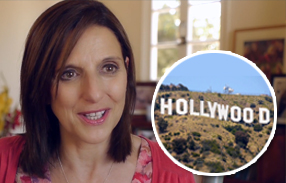 From Withington, Elaine completed a History degree at Bedford College, part of the University of London, and then a Journalism course at the University of Wales in Cardiff. Elaine briefly worked at the Bradford Telegraph and Radio Hallam in Sheffield, before moving to London to work at Channel 4 at its inception. After working on The Friday Alternative, a radical substitute to the news, Elaine was a reporter presenter for TV-am. However, it was through freelance work for the BBC and Granada Television that Elaine made her move to America, whilst continuing to write for British newspapers including The Guardian, The Times and The Daily Telegraph.

Elaine currently writes the feature articles for newspaper supplements Stella and Seven magazines for The Sunday Telegraph, and Live and You magazines for The Mail on Sunday. Through this, Elaine interviews some of the biggest Hollywood stars about their latest projects and personal lives. “I am the luckiest person in the world because my job is fantastic – it takes me all over the world: I’ve travelled to Taiwan to interview Ang Lee which was extraordinary; to Kevin Costner’s home in Aspen to interview him and have lunch with him; I’ve interviewed Bruce Willis whilst lying on the bed in the Mandarin-Oriental Hotel with him drinking Starbuck’s – that was definitely a memorable moment. I’ve flown in Kevin Costner’s private plane back from Shreveport to LA because he insisted I should get home in time to be back to make dinner for my children.”