Lower Sixth Former Sarah Slattery has won joint first prize in a prestigious essay competition set by a leading Cambridge University college. Sarah was presented with her prize and £100 at a ceremony at the open day of Corpus Christi College on 20th April. 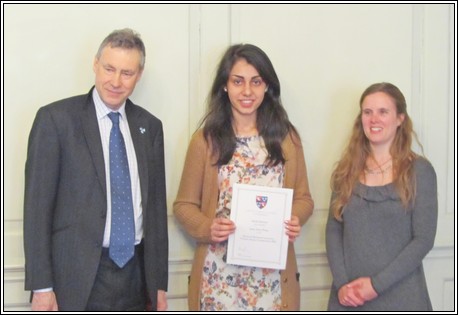 Given a brief that the main focus of her essay ‘should not be something that has been or is currently being studied in the classroom', Sarah chose a History title – not one of her A-level subjects nor even one she studied at GCSE; she submitted her winning 2,000-word essay on Does the decline and fall of ancient empires have anything to teach the modern world?


She said: "It took a month of research in the library of Manchester University – to which Withington Sixth Formers have open access – and I started writing it during the Christmas holidays. It feels really special to have won."

Sarah, who celebrated her 16th birthday on GCSE results day – she scored 11 A* passes – is currently studying Greek, Latin, French and Mathematics at A Level and hopes to read Classics at university.

Head of Classics Ms Lucy Holden, said: "Sarah has done brilliantly. She only started studying Greek in Year 11 as an extra-curricular pursuit, taking lessons at lunchtime and after school and this year jumped straight into the A-level course.

"The Corpus Christi competition is set for Lower Sixth Formers by the college admissions department seeking an early indication of their readiness to study at a higher level."

Said Sarah, "I have never been to Greece and only ever spent one day in Rome, but I once went to Turkey on a school trip. I am fascinated by the language and culture of the ancient world and focused on the fall of the Greek and Roman empires. I really enjoyed exploring new aspects of the subject for my essay.

"I think there are parallels between the decline of the ancient empires and modern times and we can learn a lot from it."