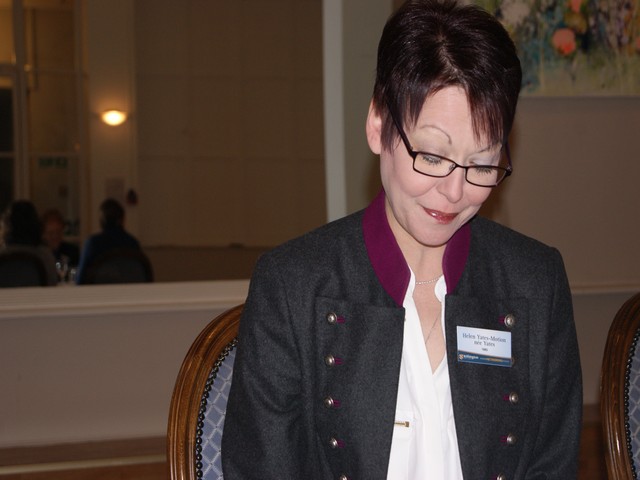 “Thank you so much for a very well organised and really absorbing evening.”

“A great event, loved the informal atmosphere and opportunity to chat!”

On Wednesday 7th March 2012, Withington’s Development Office hosted its second Networking Forum for Alumnae, focusing on the Not-for-Profit and Public Sectors. Held at the New Cavendish Club in central London, the event saw former pupils of all ages gather to hear a panel of Alumnae speak about their experiences in the sector and to engage in a round-table discussion about the challenges faced by fundraisers and campaigners.

On arrival at the New Cavendish Club, guests took the opportunity to network informally and catch up with old friends whilst enjoying a glass of wine. After introductions from Withington’s Development Director Clare Flynn, panel members and guests then introduced themselves and explained briefly their role or interest in the sector. Guests included a fundraiser at a Homelessness charity and a Doctor working at the Wellcome Trust, as well as volunteers, recent graduates looking to move into the sectors, and people working in the private sector.

The panel of speakers, which included Helen Yates-Motion (née Yates, 1985, Chief Executive of the Multiple Sclerosis Resource Centre), Danielle Morley (1987, Chief Executive of Freshwater Action Network (FAN)), and Elspeth Lee (1996, who has worked for the Department of Health and for Cancer Research UK), then read aloud letters they had written to their younger selves advising them of how their careers paths have progressed and the lessons they have learnt.

Danielle Morley explained that after receiving her invitation to the 1987 leavers’ 25th Anniversary celebrations in May recently, she had found writing her letter and reflecting on her career since leaving School very enjoyable. She told the group how, after enjoying a gap year trip to Africa (a continent she would visit regularly later in her career), she studied Law and practised as a Solicitor before a “breakthrough” came when, aged 28, she studied a multi-disciplinary MSc in Environmental Technology, Global Environmental Change at Imperial College London.

After coordinating the participation of global civil society organizations (NGOs) at the World Water Forum in The Hague in 2000, a “remarkable personal and professional journey” began, as Danielle founded the Freshwater Action Network, which has flourished under her leadership into a vibrant network of NGOs spanning 89 countries in the global south working together to increase political will for access to water and sanitation for the poorest and most excluded people as a human right. Danielle told the group how, as part of her role, she has directly influenced government negotiations at the UN, and that FAN was instrumental in the recognition of the Human Right to water and sanitation at the UN Human Rights Council in 2010.

Elspeth Lee then shared her letter, which reflected on her career to date and the lessons she had learnt through her various roles. She explained to the group how, after leaving university, she was inspired to join Oxfam’s Graduate Scheme after meeting a Campaign Manager working for the charity; and how this strategy of being inspired and influenced by individuals has led to several opportunities during her career. She advised those looking to move into the sector to be bold and contact people who may be able to guide and advise, as people are always willing to help and are flattered to be asked for advice.

Elspeth explained how the broad theme of health has continued throughout her career as a campaigner, and how after some time spent working for Oxfam in their health projects, she completed an MSC in Public Health, during which time she undertook public health consultancy work and completed an internship in social mobilisation and behaviour change with the WHO in Geneva. She later joined Cancer Research UK for 6 years, where as Head of Tobacco Control, she was involved in ‘big picture’ health campaigning and policy work which led to the implementation of the smoking ban in July 2007. After moving to the Department of Health, she is now looking at health on a more cellular level and is currently studying for a degree in Nutritional Therapy.

Elspeth told the group that although she could possibly be further up a “tree trunk” if she had concentrated solely on one, she now has “a few saplings instead”, and that learning to make these ‘saplings’ grow together suits her approach to her career much better. She advised those considering developing their careers in the sector to think about what would challenge them and what they would enjoy, rather than “sticking to what you know”; and not to be overly concerned about fully meeting a person specification when applying for roles, as often employers are looking to hire someone who will develop into their role, a lesson which described as being hard to learn for an “honest and precise Withingtonian” such as herself. 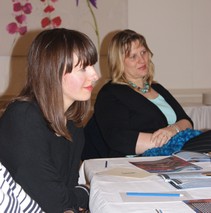 Elspeth concluded her letter by speaking of the importance of maintaining work relationships, and how she has found that working in a large organisation can give the ability to build experience relatively quickly by working on projects outside your remit. Her final words of advice were to accept any praise given graciously, rather than being self-deprecating, and to realise that “no one is indispensable; that it is not good or necessary for anyone to work themselves into the ground relentlessly, and that excessive hours need not be seen as positive”.

Helen Yates-Motion then spoke of her “unconventional and somewhat circuitous route” to her present career. In her letter, she spoke of completing her university degree as a mature student, and the positive affect this, and her experiences in becoming a young mother, had had on her life.

Helen talked of her “interesting” career choices prior to commencing her degree in History and Politics, and how, although she undertook some roles out of necessity, these roles have helped her enormously by broadening her perspective on the world and leading her towards a career in the not-for-profit sector. She finished by imploring her younger self to plan ahead more, but above all, not to panic!

After the speakers had delivered their letters, Clare Flynn thanked the speakers for their honesty and commented that one of the many benefits of networking amongst fellow Alumnae was the ability to be honest and more personal in your reflections. Clare then invited questions from the audience, and a well-informed debate followed.

One guest commented that she found it interesting that there seemed to be a common theme of people taking circuitous routes into the sector, and another wondered if it was harder for younger generations to have this flexibility as they are often ‘funnelled’ towards a certain career path from a young age. Elspeth Lee noted that she had often found that as lives evolve, so do careers, so it is not often beneficial to plan too rigidly. Elspeth commented that she had found that her Withington education had given her confidence in her abilities, which had been very beneficial to her in moments of self-doubt, as her Withington training had given her a level of adaptability which was crucial in the current employment market. Helen Yates-Motion concurred with this viewpoint, noting that her by being adaptable and taking on projects not within her remit, she had developed the broad knowledge base which led to her eventual appointment as Chief Executive of MSRC. Helen further commented that even though she now holds this position, she will always “roll up her sleeves” and complete tasks which are crucial, as MSRC operates as a team where each member supports one another. 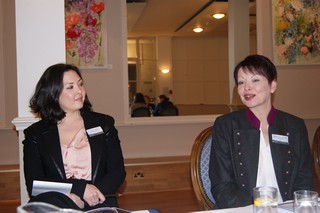 Clare Flynn commented that adaptability had seemed to be a recurring theme in the three letters, and asked Danielle Morley her thoughts on this considering her move from her original career in the Law to the not-for-profit sector. Danielle explained to the group that she had always felt that her career needed to be a vocation but that in her twenties she had not known what that vocation was, so had studied Law and then practised for two years as a Solicitor before leaving to work for a small charity in Romania. Following this role, she read widely on the topics that resonated with her most and subsequently identified the MSc course at Imperial as one which would be beneficial to her in a career in global environmentalism. Danielle explained that after moving into the not-for-profit sector, she has had to find her own way as there is no established and defined career path leading to her position, and that this, along with her previous career in Law has given her skills, such as the ability to construct an argument, which have been invaluable in her campaigning and lobbying work.

The three speakers then discussed the mentors, or ‘key receptive influences’, that they had had in their careers. Elspeth noted that her career development has been keenly influenced by different people she has met at different times who have struck a “personal chord” with her. Danielle explained her key mentor had been her previous manager, who had an inspirational management style which meant she was empowered to develop to her best; whilst Helen told the group that she had an inspirational figure in her life instead of a mentor, a friend at university who had MS and who had inspired her to work for a charity which helped those dealing with the condition.

Discussion then turned to more specific issues affecting the sector, such as the sometimes uneasy relationship between larger national and international charities and smaller charities campaigning on the same issues, and the need for smaller charities to maintain a media profile in order to raise awareness of their work and provide an impetus for fundraising. One guest, a recent graduate, asked the panel’s opinion on the best route into the sector, and wondered whether internships can lead to permanent opportunities. The panel agreed that internships were an excellent way of gaining valuable experience, but that it is crucial to work on a specific project rather than simply ‘helping out’, in order to secure clear evidence of your achievements and development. Several guests then shared their personal experiences of internships leading to permanent positions within charities.

Finally, Clare Flynn asked the panel what they felt has been the most important skill that they have learnt and used in their careers; the three speakers identified relationship building, respect for colleagues, and tenacity and diplomacy as the skills which have served them best.

As the formal discussion concluded, Clare Flynn thanked the speakers and presented them each with a token of appreciation on behalf of Withington, before guests enjoyed a hot buffet and further refreshments whilst continuing the debate. 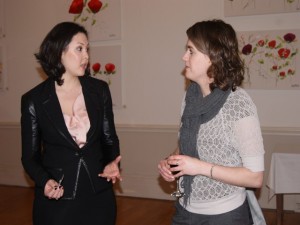 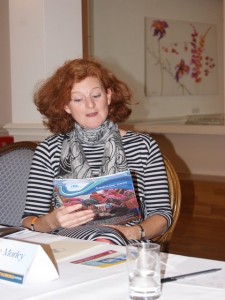 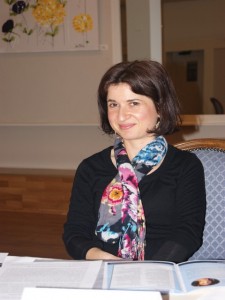 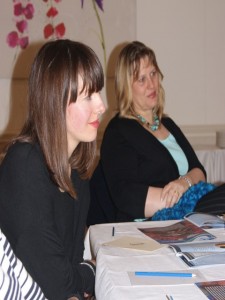 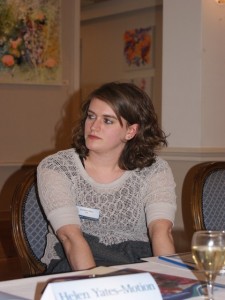 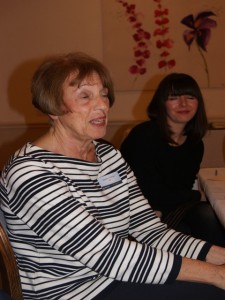