Remembering Linda and the Children 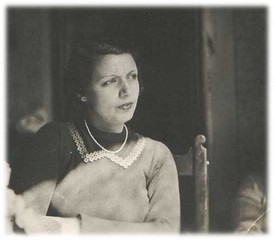 Many Alumnae may recall hearing the story of their fellow Withingtonian, Linda Bentata, who was killed along with her children at Auschwitz Concentration Camp during the Second World War.

On Thursday 19th January 2012, we were privileged to welcome Jackie Mesrie, Linda's niece, to School to speak in our Senior School Assembly about the fate of her Aunt and cousins, and her family's trip to meet those who had tried to help them.  Her speech is reproduced in full below.

"Thank you for inviting me to address you this morning.

"I am here to tell you a very moving true story about my Aunt, my late father's sister, and her three children, who all perished in the Holocaust. 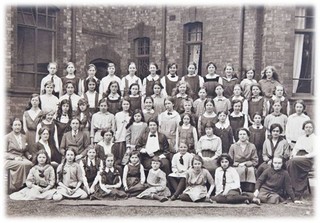 "My Aunt, Linda Bentata, attended Withington Girls' School from the age of 11 to 18. A photo obtained from your Archivist shows her in 1915 with the rest of the School. She went on to study at the Northern College. She married in 1924, and went to live in Milan and later Brussels. She had three children, Jacqueline, Janine and Freddy.

Sadly her husband died very suddenly in 1937 leaving her a young widow. My newly-married parents went to stay with her for six months as she came to terms with her loss, where they became very close to the children and of course to Linda.

"Like all of your parents, Linda valued and was concerned about the children's education and as the warnings of war began to echo through Europe her family in Didsbury insisted she return to Manchester. But her eldest daughter, Jacqueline, was taking her Bacalaureat, and when Neville Chamberlain returned from Germany in September 1938 saying there would be peace in our time, Linda and the children returned to Brussels.

"With the declaration of war on 3rd September 1939, Linda fled from Brussels with her children to a seaside town on the north-west coast of France called La Baule. There, on 16th July 1942, they were all arrested by the Germans and taken to Auschwitz concentration camp, where they were murdered by the Nazis.

"My brothers and I, who were being born as our Aunt and cousins were dying, also grew up in Didsbury, knew very little about this story as our parents were too heartbroken to speak of it – there was a silence where a family should have been.

"Our father died young, but our Mother lived to 95. When she was 90, I had her interviewed and a DVD made of her long life. I expressly asked the interviewer to encourage her to talk about the Holocaust and how it had affected our family.

"She spoke very emotionally, often tearfully, about the loss of Linda and the children; how they had received letters and cards which were obviously censored by the Germans, as Linda never wrote of her fears or the dreadful things that must have been happening. The last card my parents received was dated 11th July 1942 – just five days before they were arrested.

"For three years the family heard nothing, but at the end of the war the Red Cross entered the camps and discovered the meticulously kept records of every person that was murdered , including the names of Linda, Jacqueline, Janine and Freddy.

"My Mother continued, saying that before they were taken, Linda must have realised the danger she was in and entrusted her valuable collection of jewels to a lady who must have been a close friend. After the war, this Catholic French lady contacted my Father and said she had something of importance to give him, and asked him to meet her in London. My Mother related how she gave him a suede bag containing beautiful jewels with a list written by my Aunt – every item on the list was there. My Mother spoke of this lady as having the highest degree of honesty as no one would have known if she had not returned them. As my Mother said, no amount of jewels could replace the loved ones who had been killed so cruelly, but the fact that in the midst of all that horror there was a noble soul was a comfort. My parents had no idea who this lady was, and because of the distraught state they were in, they had not kept a record of her name.

"My brother and I determined to go to La Baule after our Mother died to find who she was. Inevitably, with the passage of 68 years she would have died, so we hoped to find her descendents. We felt we would go on a sort of pilgrimage to try and find out what had happened to our family, but mainly to find this family and honour this unknown lady.

"We contacted a French newspaper in the area, who printed a full page story about our family. They also went to Linda's villa and checked with the Town Hall for any information. We had three replies in response to the article: one from the head of the Jewish community, one from an archivist studying what happened to the Jews of north-west France, and most importantly, a reply from a gentleman, Albert Gernigon, aged 81, who had been at school with our cousin Freddy. 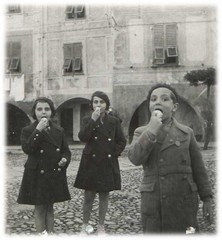 "He came to see us and told of how he remembered the Jewish children being taken out of school in February 1942, returning very embarrassed wearing the yellow star with ‘Juif' in the middle, which marked them out for persecution. He brought with him a list of the prizewinners of July 1942, which mentioned Freddy's name a few times, and also the name Despretz, which I had seen mentioned in my Aunt's earlier letters.

"That evening we visited Linda's villa and met the present residents who had no idea of the horror that had taken place there. The next morning we went to the Town Hall where they had an amazing document to show us relating to the requisition by the Germans of Linda's Villa after she had been arrested. Remarkably, this document included an eyewitness account of the arrest of Linda and the children. It read:

MMe. Yvonne Despretz born 11th July 1890, living in the Villa Les Opales, Avenue Saumur tells us:
"I witnessed in the capacity of neighbour the arrest of the Besso Family 16th July 1942.
"The doors of the Villa Martine were locked in my presence by a German soldier.
"About 3 weeks ago accompanied by a German officer I entered the VM where I packed some things, sheets and clothes to send to MM Besso to the transit camp in Angers, she having been given permission to receive some of her belongings.
"This done the seals were fixed on the door in my presence. The Villa Martine was in a state of inexpressible disorder when I left. Cupboards emptied, drawers opened.
"Since then I have seen no one enter the villa. Apart from the furniture there is nothing worth taking."

"So it appeared that the Germans had been searching for the jewellery.

"We then went to a Museum run by two French brothers where there was no mention of what happened to the Jews during the war, followed by a visit to the Archives in nearby Nantes, where we saw the actual identity cards of our family, stamped with ‘Juif'.

"On our return to Manchester we decided that Madam Despretz was probably the honest lady who had helped our Aunt. Her name had appeared in Linda's letters, the children were prizewinners at the school attended by my cousins, and most importantly, she had witnessed the arrest and been asked to send things to Linda in the camp. But how to find her or her family?

"After searching Google and Facebook with no success, we contacted Albert Gernigon, who after eight weeks had found them. We spoke to Madam Yvonne Despretz's younger daughter, Nicole, on the phone. She remembered seeing the family arrested from their adjacent villa and certainly remembered their Mother going to London with the jewels.

"We arranged a reunion, or ‘retrouvaille' as the French call it, with the family in November 2011 in Nantes, one hour away from La Baule. We drove down a long magnificent drive to beautiful home in its own grounds, where 16 members of the family came to meet us. One Grandson flew from Barcelona, many drove 4 hours from Paris and there was even one great grand daughter of Madame Despretz. Madame Despretz had had five children, one of whom had died and one who lived in China. They were all in their 80s.

"The French press were there and they watched as we played the DVD of our Mother, where she spoke so movingly of their own Mother, Madame Despretz.

"They told how their Mother saw the Gestapo coming down the road two weeks after the arrest of Linda and the children. She realised they were coming for the jewels and threw the bag containing them out of the window. She herself was arrested and taken to a prison for 24 hours and interrogated as to whether she was in possession of the jewels. She bravely denied it and was eventually released.

"Remarkably, they had kept a small pill box labelled MM Besso that contained trinkets and a child's pearl necklace. They had kept them safe for 68 years and returned them to us. We presented each of the children with a framed certificate of appreciation from Yad Vashem, the Memorial in Jerusalem for the 6,000,000 who perished in the Holocaust. After hearing them speak so movingly of our lost family, we retired to a beautiful restaurant where we raised our glasses to the memory of Yvonne and Linda and the children. 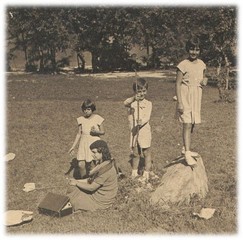 "We felt we had honoured our parents who had been so heartbroken at this tragic loss and remembered this fine French, Catholic lady who had helped and befriended our Jewish family when they must have felt so desperately afraid. She showed that amongst all that evil there was still courage and goodness. A good deed is never forgotten and lives on in the hearts of all her family and will certainly stay within our family for generations.

"We could not change Linda , Jacqueline, Janine and Freddy's tragic fate of death at Auschwitz Concentration Camp but they will never be forgotten and we must ensure that such acts of wickedness and cruelty are never to happen again."