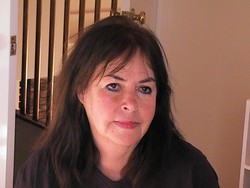 I was born in Porthcawl to a Welsh mother and Dutch father; then we (including my twin brother aged 9) moved to South Norwood. From the sea and sand dunes to London's suburban streets was a terrible wrench. My father was later re-located by Unilever to Manchester where I began at WGS in 1954. I left in 1959 to study Sculpture at Art College.

My most lasting memories of WGS are of sitting under ‘The Circus' a wonderful Laura Knight painting in the dining room. Also, of Sheila Walsh, English teacher, who not only encouraged me with my writing, but introduced me to poetry – particularly that of Matthew Arnold; Barbara Hislop, art teacher, and Mrs Hill (Latin) and all her lovely twin-sets – a different one each day. Marjorie Rawsthorne was a rigorous but fair form teacher, and Miss McCardle a wonderful music teacher. I owe my love of singing to her, and to being in the school choir. Classmates, Shirley Topham, Celia Milne, Lynn Jordan amongst many, were the best, and I was sad not to make our latest reunion. I forgive Marion Apley for targeting me in goal so accurately during hockey matches, (we did keep in touch for a while) and the redoubtable Miss Corfe for insisting I continue climbing up the rope in the Gym even though my knicker elastic had broken!

I admit I was sometimes naughty; ‘walking' a small rubber dog my father had bought me from West Africa, along the biology lab's worktops, making it cock its leg. This was soon confiscated, as were my transistor and small, pink ear phones during RE, when my teacher realised they weren't hearing aids…

My worst crime however, was leaping from the window during a Maths lesson after a panic attack during algebra. I then settled down. ‘Aspects of British Art' was my very fine leaving gift in 1959. I still treasure it for the essays on Samuel Palmer, Paul Nash etc…

At Manchester Art College and at St Martin's, London, I studied sculpture to degree level with a Distinction and was awarded the MA equivalent. I'm proud to have blazed the trail that Shirley Topham and others followed, while Sarah Burton's achievements in Fashion Design should inspire many other WGS girls.

Having been runner-up in the Rome Scholarship and possessing the Art Teachers' Diploma from Sussex University, I was appointed Lecturer in Sculpture at Plymouth College of Art. I'd turned down a post at Brisbane University, as I'd met Jeffrey, my future husband, now a well-known painter of musicians and composers.

Later, with two young daughters, we returned to Wales for them to experience the childhood I'd had. While teaching art and sculpture full-time at the local secondary school, I became a successful watercolour/collage artist and, because of our agricultural location, began sculpting sheep. An article in The Observer magazine brought worldwide commissions, and I also worked on replica Greek and Roman terra-cottas for the British Museum.

Life was to change, however, when I won a major international short story competition, based upon my experiences of working in an underground mushroom farm in Buxton, and was approached by a London agent.

Fast forward to 2001 when ‘Wringland,' my crime mystery set on the Fens was published by Macmillan as part of a two-book deal. I have not stopped writing since, and on February 1st 2012, 'Cold Remains,' my sixth chiller set in rural Carmarthenshire, is published. In 2013, my controversial thriller ‘Malediction,' set in France will be on the shelves. We've kept a bolthole in the Pyrenees for many years – my WGS French lessons standing me in good stead in such an inspirational place, yet where, like Wales, past shadows still lurk.

My poetry has won several awards and been widely published. 'Gaudeamus' inspired by Withington, won the Anne Tibble Award. I came first in last year's Welsh Poetry Prize and this year was its adjudicator. I also judge other writing competitions and am a regular speaker and workshop leader at writing conferences where I enjoy discovering talent and help budding authors get published. The e-book and Kindle are making some interesting waves…

Withington now seems so forward-looking and, judging by photographs and news of recent and current pupils, provides the perfect base for these young women to believe in and fulfil themselves. The world has changed since I first leapt from that window, but my message to all is simply ‘follow your heart'.