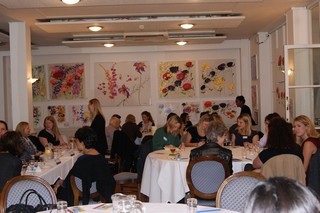 “Thank you. Really interesting and enjoyable.”

“An excellent event, a most insightful insight into the working world. It was exceptionally interesting and useful. Thoroughly enjoyed it”

“Really interesting discussion from a variety of women/career paths.”

“I really enjoyed the open forum to share experiences. I would definitely attend a future event. Thanks.”

“It is great to broaden the alumnae network across London!”

Wednesday 12th October marked the date of Withington’s first Careers Networking evening for Alumnae, held at the New Cavendish Club in London.  The event, hosted by the Development Office, was attended by over thirty Alumnae of all ages and their guests, who gathered together in central London to hear a panel of four Alumnae working in Law, Finance and the Media talk about their experiences in their careers thus far.

On arrival at the New Cavendish Club, guests took the opportunity to network informally and catch up with old friends whilst enjoying a glass of wine.  After introductions from Withington’s Development Director Clare Flynn, the panel of speakers,  which included Annette Byron (1982, Partner at Freshfields Bruckhaus Deringer), Janet McBride (1982, Editor for Europe, the Middle East and Africa at Reuters), Charlotte West (1996, Director at RBS Global Banking and Markets) and Sharon Smith (1989, Partner at DLA Piper), read aloud letters they had written to their younger selves advising them of the things they wish they had known when they commenced their careers in their fields.

Each panel member introduced themselves, and explained their respective roles and responsibilities, before the discussion was opened up and questions were invited from the audience.  A lively and well-informed debate followed, as panel members and guests considered questions such as the path to take into these professions today, whether the path to partnership is difficult in a male-dominated field and the issues surrounding being a woman in the workplace.

The panel were in agreement that some gender inequalities were still present in the work place, although the situation was constantly improving. It was noted that women regularly have to walk a fine line between being assertive without becoming overly aggressive. The panellists in Law and Finance advised that it is important to be determined and to know your own worth in order to succeed and progress in a corporate environment.

Guests speakers agreed that ‘sexism’, from colleagues and clients, is something that cannot be ignored but instead has to be “got around”. One advised that her way of doing so was to be “the best version of herself” and refusing to sacrifice her own character and morals, and it was agreed that over time, one gains confidence in how to handle certain behaviour. Members of the audience commented that the prevalence of sexism often depended on the industry, with those working in the creative and media industries reporting fewer experiences of prejudice than those in more traditional and corporate fields. Women were encouraged to support and help one another.

Following the publication of the Lord Davies report this year, the hot issue of quotas for female executives was discussed by the panel and audience. It was felt that women can achieve high level of success without the need for quotas, providing they are made aware of opportunities and are given the chance to take them. Annette Byron, who sits on Freshfields Bruckhaus Deringer’s Global Diversity Panel, explained that the purpose of that group, which takes into account race and ethnicity as well as gender, was to scrutinise the recruitment process to ensure that any ‘hidden biases’ are removed.

The discussion went on to cover topics such as hidden skills needed to secure a successful career in these industries.  On the subject of networking itself, the panel exhorted guests to get involved with networking and mentoring programmes within their organisations. 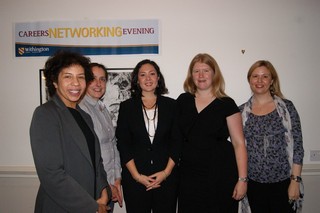 Clare Flynn asked the Panel what advice they had for those starting out in their careers or hoping to enter a similar profession in the future. The panel commented that entry into their professions had never been more competitive for graduates, and that as it becomes increasingly difficult to differentiate between applicants, with over 80 candidates applying for each graduate position, academic qualifications are now only a small element of what is required to gain entry into their professions. Guests benefited from helpful pointers which were backed by the guests speakers’ first-hand experiences in junior recruitment.

Above all, those in the early stages of their professional lives were implored to stay true to themselves, to give themselves time to have a personal life, and to take a career path because they want to, and not because they feel they should. The Withington ‘can-do’ attitude was seen as a huge advantage for those starting out in demanding careers, and all felt that the work ethic they had developed at School had benefited them in their careers.

Finally, the topical question of whether women can ‘have it all’ was debated by the panel and audience. The panel spoke about one of the hardest lessons they had had to learn being that sometimes, “good enough” is enough and 110% effort is not required all of the time. The audience were encouraged to consider what would make them happy as individuals and assess their priorities accordingly.The panel’s conclusion on this topic was that having all you want as an individual should be the aim, rather than having ‘it all’ as defined by someone else or society.

After the formal discussion concluded, guests enjoyed a hot buffet and further refreshments, with  many taking the opportunity to connect with fellow Alumnae working in their own sector and to continue the debate.

Clare Flynn thanked the speakers formally and presented them each with a token of appreciation on behalf of Withington, before guests left to continue discussing issues raised at a nearby bar.