We were treated to a fascinating evening at an Alumnae event organised by the Development Office on 3rd May which featured former pupil Denise Parnell (1979). Assistant Referee at the Wimbledon Championships, Denise hosted this unique evening at the Courtside Restaurant in the All England Lawn Tennis Club (Wimbledon) on Tuesday evening. Around 60 former pupils and guests assembled to hear Denise talk of her experiences in professional tennis and her subsequent role as referee for tennis Championships around the world at an exclusive event made organised for former pupils and staff of Withington.


Mrs Sue Marks, Headmistress, warmly welcomed all guests before introducing Denise who talked about her very early experiences of tennis lessons and Games classes at Withington. As the sun streamed in through the Courtside restaurant windows, guests heard details about Denise's early tennis career, under the able tutelage of Charlie Applewhaite and his mother in Didsbury to her title as Under 21 Champion of Great Britain. 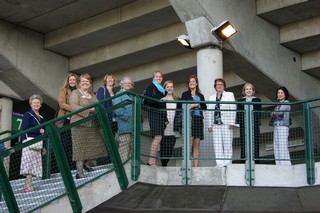 Denise paid tribute to Headmistress, Miss Hulme, who encouraged her to be the best she could be in her chosen career and she fondly recalled the lunches eaten at lightning speed ahead of sports practice on the playing fields.

Denise, who holds much coveted membership at the All England Lawn Tennis Club, recalled how her love affair with the Club started in 1978. Mrs Applewhaite, Charlie's mother, had won a set of tickets in the National Tennis Coach's Ballot to the Ladies Championships Final. That year Denise found herself the proud guest of Mrs Applewhaite, herself a greatly revered tennis coach, on Centre Court watching the final between Martina Navratilova and Chris Evert. She was enthralled and knew then that Wimbledon would play a part in her future. Serious tennis training commenced and numerous tournaments later, in 1986, Denise qualified to win her place in the Wimbledon Main Draw.

In 1990, Denise retired from professional tennis and began to coach and later, to referee. She is now in her 22nd year of refereeing and trains the IBM team at Wimbledon. Denise took care to explain the difference between the duties of an Umpire and those of a Referee and all were greatly interested to learn about the nuances involved in the role and the impact that a Referee's decisions will have on a Centre Court game.

Denise told of how the Withington ethos of ‘applying yourself' came into play as she faced the gruelling process which resulted in her being awarded firstly, a Silver Referee Badge and then a Gold Referee Badge. Denise is one of only 12 women in the World in ownership of one. The work has never been easy but Denise's passion for tennis and dedication came through. As a referee, she is now self-employed and works throughout the year for the ITF, U.S Open, the Australian open, the Lawn Tennis Association and the AELTC spending much of her year travelling abroad, but, she no longer referees Junior tournaments, she informed guests with a wry smile. 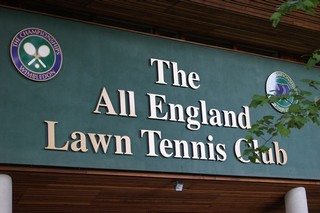 To view a full gallery of photos from the event, please click here.

Before introducing Andrew Jarrett, Head Referee of the Wimbledon Championships, Denise recalled a quote and related the same to Withington's ethos and the role this played in her own choice of career: "Be who you were meant to be and you can set the world on fire"

Wimbledon Tournament Referee Andrew Jarrett then took to the stage and wowed guests with ‘inside information' and details about the Championships and anecdotes about famous visitors to the Club. Denise and he proceeded to show guests a selection of rare photos prepared especially for the event, showing Wimbledon from its beginnings in 1922 to its present aspect and detailing interesting statistics and facts such as the number of tennis balls used in the two week annual tournament, how many strawberries are consumed. We heard about ‘Hamish' the Hawk, the friendly bomb control dogs and the famous duck which made a home in the awnings and delayed play in 2007. The roof on Centre Court was a popular topic as guests learned of the unique climate control system installed to ensure the famous Wimbledon lawn does not wither during play. 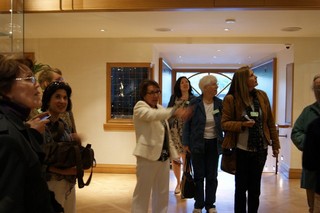 A full-length tour took place following Denise's presentation and guests set off in opposing directions to take in all corners of the Club and the Championship area. One or two guests who work for the Championships in very different departments received a rare insiders' perspective as we were shown around the Players' changing room and the Trophy area in the Private Members' Clubhouse. The trophies, which had disappeared just the day before, were reinstated, gleaming, to their cases in time for guests to fully appreciate their handiwork and take lots of photos.

"Wimbledon event really was fantastic… In short, thank you for organizing such a brilliant event"
"What a fantastic evening – abundant gratitude from me"
"Well done and I really look forward to seeing you again at another event. You've set the bar very high now!"
"Denise was such a great speaker. She has a lot of passion for Wimbledon and tennis"
"it was amazing to be taken around the grounds, I had no idea it was so big"
"Going in the changing area was a real treat, what an insight! Thanks so much"
"What a delightful evening you organised on Tuesday. Thank you so much."
"Denise was fabulous and went to so much trouble to ensure we didn't miss anything."

The fascinating day drew to a close as Clare Flynn, Development Director, thanked Denise, Andrew and Dannie and Liz our ‘tour guides' and all at the AELTC for a unique evening and wished all Alumnae and guests a safe journey home.

Thank you to Denise Parnell and all at Wimbledon who made this event possible. It was a pleasure to see so many former pupils and former staff, and we hope to see you at the next ‘Access All Areas' event – keep checking the website for details.

Those of us who attended from Withington will be watching the Tournament this year with very different eyes!