Following on from her talk at the Senior Club AGM on Saturday, Alumna Ann Lipson [1956 year leaver] addressed the Senior School Assembly on Monday, before spending the morning with the Junior School talking to them about her work at the IcFEM Christian Mission in Kenya. 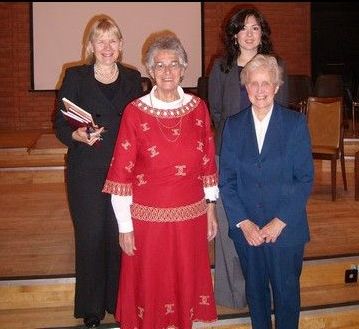 Ann entered the III Form at Withington in 1948 aged 10, as one of the youngest girls in her year. She then moved to The University of Manchester to study Physics, which she then began to teach. In 1974, she went out to Kenya to teach for a two year placement, where she still lives, "on a gap year", today. Ann spent almost twenty five years teaching Physics at Lugulu High School in Kenya; now retired from teaching, she is the Deputy Director of the IcFEM Mission, with which Withington has numerous links, including supporting two pupils at Lugulu each year. She was accompanied to School by Ruth Neal, a former staff member who retired from WGS in 2000 and who has led on Withington's fundraising for the Mission.

As the girls filed in to Assembly, a PowerPoint with images of Ann's friends and colleagues in Kimilili was shown. Assembly began with the hymn ‘Dear Lord and Father of Mankind', chosen by Ann for its inspirational message. Ann, who celebrated her 70th birthday last year, told the girls that "growing old is inevitable, growing up is optional", confiding in them that her favourite birthday present was a tub of Lego, which the children from the village came to play with at her home when making the use of their rare moments of free time.

Ann painted a vivid picture for the girls of life in Kenya, and of her work at the IcFem mission, as well as reminding the girls of the many links between Withington and Kimilili. Withington's pupils have previously raised funds for the Mission, to pay for a motorbike to be used by the lady who organises student sponsorship. Two years ago, Emma Slater [2003 year leaver] visited Kimilili after winning the Senior Club travel Award. Visitors to the Mission such as Emma offer practical assistance during their stays, and Ann demonstrated one such task – ‘mudding' a house – to the girls. The girls were also amused to hear the story of the pupil of Ann's who was awarded an MA scholarship in London, and who was amazed to hear her fellow students complaining of a broken washing machine, telling them to be grateful that at least they did not have to fetch the water themselves from the river.

Ann encouraged the girls to visit Kimilili themselves with their families, to learn first-hand what it is like to be a girl in Kenya. She ended her assembly by telling the girls to "be willing and be ready" for whatever opportunities arose in their lives, inspirational words that struck a chord with her audience. In Mrs Pickering's words, Ann is a "shining example of someone who has given her life to serve others", an attitude wholly in keeping with the ethos of the School.