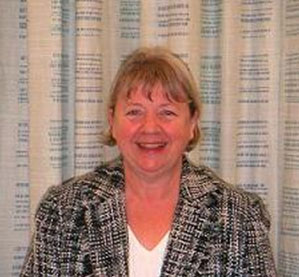 I joined Withington, as a rather scared seven-year-old, in 1954, when building work meant that Form 1 had to live in the main hall for part of the year. I have very vivid memories of that time. We learned pounds, ten shillings, shillings and pence in Maths; there were two little cloakrooms at the back of the hall; we had a Christmas party, at which we had to sing Auld Lang Syne, joining hands at the correct time, only when justified by the words of the song. Lower 2 was in an upstairs room with Miss Stewart, as was Upper 2 with Miss Hunter. Everyone looked forward enormously to the time after the entrance examination when we sewed little felt animals.

The Third-Form form-room was just off the library and we had to be very quiet for the sake of the older girls. Later times are a blur, punctuated by startling moments, such as our hearing about the Munich air disaster, having a mock election, seeing where a school fire had been and learning about right-angled triangles. I remember Miss Bain telling us to take G.C.E. in our stride, so we all volunteered for the school play Julius Caesar, with its huge cast. Plays and concerts were high spots, as were Founders’ Days with Miss McCardell in her magnificent hats and with her baton raised to tell us when to take off or put on our blazers.

The Sixth Form was great fun, with not only our chosen subjects but also our practical science lessons, involving trips out and such tasks as making hand cream. We all volunteered for A Midsummer Night’s Dream and later revelled in a trip to Stratford in 1964 for the 400th–centenary celebrations. The exhibition featured smells, so Yorvik in York had nothing new when it opened.

We all loved our lessons and such things as a trip to Old Trafford for the cricket. I remember a lot of knitting and endless sunny days before we sang Go forth with God and left expecting not to return except for reunions.

I read English at London and was able to enjoy the National Theatre in its glory days at the Old Vic and the productions which Peter Hall brought from Stratford to the Aldwych. It was also the swinging sixties. What a time to be in London!

I decided on teaching as a career and did my Dip. Ed. at Oxford, where my future husband was, so work was punctuated by punting and plays in college grounds. It was even possible to afford commem. balls. There have been various forays into other schools and playgroups, but most of my teaching has been at Withington, firstly in Joyce Boucher’s English Department. How kind everyone was when I returned, and what a lovely time it was, with Joyce’s productions and various theatre jaunts, including an introduction to the mystery plays at York.

I stopped teaching to bring up our two daughters and again expected ‘not to return except for reunions’, but somehow found myself, some years later, covering maternity leaves before coming back part-time to teach Italian, English and juniors, and then full-time as teacher of Transition (Year 3) and teaching English and Italian to sixth-formers.

Hardly surprisingly, plays, musicals written by me and Sasha Johnson-Manning, theatre trips, Stratford jaunts and Italian week-ends have figured largely in recent years, along with feelings of great gratitude at being allowed to teach such special pupils, make such wonderful friendships and be part of a unique school.

Now I have retired, and trips to Italy, the National Theatre, Stratford, and theatres in Manchester are being fitted into an existence that is thus becoming as crowded as ever. The housework I was aiming to do still seems to be waiting, but never mind the hoovering. I have tickets to book!