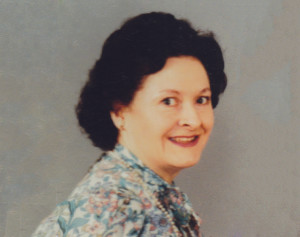 Margaret Elizabeth Agnes Connell taught Mathematics at Withington from 1955 to 1966. She worked under the Headships of Miss Bain and then Miss Hulme and saw many bright girls succeed in their university applications to read Mathematics at Oxford, UCL and other universities, at a time when few girls went on to higher education. Margaret also witnessed the School’s infamous fire of 1960 which consumed much of the Science and Sports Wing.

On leaving Withington, Margaret rose to become Senior Lecturer at Manchester Metropolitan University where she remained until her retirement. During the summer holidays Margaret was able to indulge her love of travel, and visited many places including Rome, Venice, Salzburg and Florence. In the years following her retirement, Margaret kept active and studied Classical Civilisation, Japanese and Russian.

Music, another passion, played a large part in Margaret’s life, and her love of opera – in particular for Richard Wagner – was evident in her extensive collection of books and LPs. Margaret’s health took a sudden turn for the worst in the autumn of 2013 when a brain tumour was diagnosed, and she passed away peacefully in a hospice on 23rd October 2013.

Charity played a significant part in Margaret’s life. She generously supported a number of charities and was a lifelong lover of animals, supporting local animal rescue charities and the donkey sanctuary. However, education and the opportunities provided as a result were Margaret’s passion, and her very generous parting gift of nearly one million pounds to the Withington Girls’ School Bursary Fund will stand as a lasting legacy to her memory. These funds have been invested in the WGS Trust and will allow the School to offer several means-tested bursaries to bright girls in Years 5 and 6 of the Junior School (Connell Bursaries). This remarkable show of generosity is one which Withington Girls’ School will treasure in Margaret’s memory for generations to come.