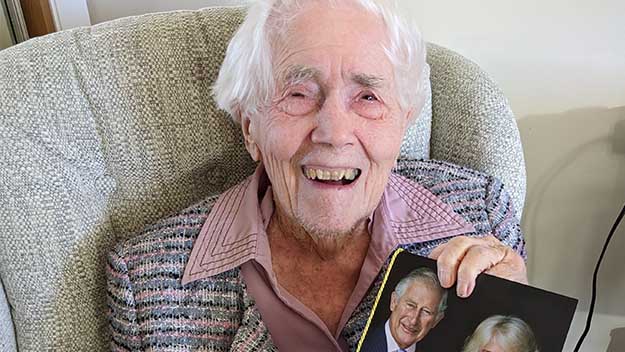 Congratulations to Miss Hulme who celebrated her 100th birthday in November. Mrs Haslam, Headmistress, and Lesley Dowdall, Director of Development, were very pleased to be able to visit Miss Hulme to convey the best wishes of all at Withington. They passed on birthday messages from former pupils and staff in a card designed especially for the occasion. Miss Hulme was also delighted to receive a card of congratulations from the King and Queen Consort – surely still one of the first people to receive one.

Miss Hulme was Headmistress of Withington from 1961 until the end of the Autumn term 1985. When she left WGS, a farewell song was written for her by alumna Sasha Johnson Manning (Class of 1981). This was recreated and recorded for Miss Hulme by the current Senior Choir, with the words modified to reflect the fact it was her special birthday.

Having attended Girton College, Cambridge, where she was awarded a Rowing Blue, Miss Hulme became a teacher, eventually taking up her post as Headmistress at Withington. During her time here a number of significant building projects were undertaken, beginning with a new Dining Room and including the Arts Centre, still very much in use and recognisable today.

But perhaps Miss Hulme’s lasting legacy to Withington was the creation in 1976 of the WGS Trust in response to the impending abolition of the Direct Grant Scheme. When the governors decided that Withington should become an independent school, it was Miss Hulme who had the foresight to realise that something was needed in order to maintain the founding ethos of the school; that Withington should remain a community centred on equality and opportunity, regardless of a pupil’s social background and financial situation.

Today, the Bursary Fund continues to uphold those aims. Over the years, countless girls have benefitted from all that a Withington education has to offer, and have gone on to flourish in their chosen professions. In honour of Miss Hulme’s 100th birthday it has been decided that the bursary fund will now be known as the Marjorie Hulme Bursary Fund.