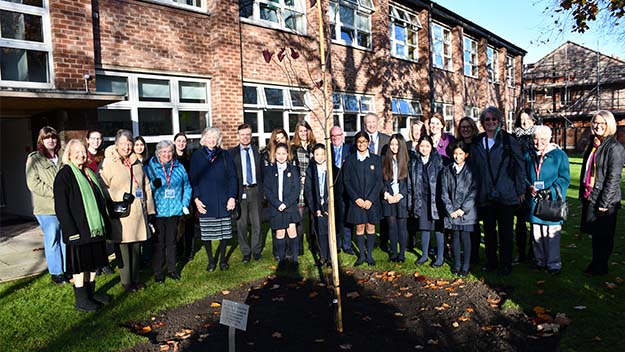 We were delighted to welcome members from MACUW, The Manchester Association of Cambridge University Women, who visited Withington in November to mark the planting of a new tree in the Withington grounds. It has been donated by MACUW to celebrate the 150th anniversary of Newnham College, Cambridge – one of three women’s colleges at the university.

Two former member of staff, Catherine Bankes, former WGS Teacher of Classics and Honorary Secretary to MACUW, and Ruth Neal, former Teacher of Biology, were amongst the Cambridge alumnae in attendance. The ceremony was also attended by WGS staff who are Cambridge alumnae: Ms Robinson, Head of Sixth Form, Mrs Bradshaw, Head of Science and Mrs Howling, Head of Classics. They were joined by Mrs Cotton, Head of Design Technology, and Withington pupils representing our Eco Team who had chosen the species of tree to be planted. They chose a Forest Pansy, selected because of its beautiful pink flowers and striking heart-shaped leaves which turn deep red. WGS Governors Martin Griffin and Howard Sinclair also attended.

Catherine Bankes gave an address about the background to Newnham College and the gift of the tree before the plaque was unveiled by Sixth Former, Eleanor. Ifra, also from the Sixth Form, then thanked the members of MACUW on behalf of the pupils. In her speech, Mrs Haslam highlighted the longstanding WGS links with the Cambridge women’s colleges of Newnham and Girton, reminding us  that WGS and Girton share a Founder in Mrs C.P. Scott who was also one of the ‘Girton Pioneers’.

Following the unveiling, members from MACUW enjoyed coffee and cake before having a tour of the school with WGS Director of Development, Lesley Dowdall.