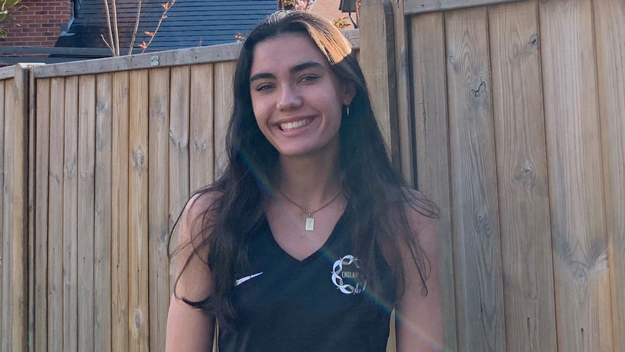 England Netball recently released their team for the 2021 Roses Academy and their line-up included our very own Silvia in Lower Sixth. Silvia, who also plays for Manchester Thunder, was chosen for a second year running. Drafted alongside 29 athletes from across the country for the Roses Academy long squad and first selected in December 2020, Silvia plays in goal defence (GD) or goalkeeper (GK) positions.

On being selected she said: “It was extremely exciting of course! It felt really nice that my hard work had paid off and that the coaches had recognised that I had potential at playing netball.”

Silvia first started netball in Junior School and went on to join a netball club in Year 7. Her favourite thing about netball is being part of a team and winning competitions as a team. Over the years, she has learnt a lot of skills, but it has mainly taught her how to deal with high amounts of pressure. This has been extremely useful as now she feels more prepared when it comes to interviews and exams.

Silvia attributes her competitive edge to her dedication to training. She says, “I always want to beat my personal bests, so I’m constantly challenging myself to train harder each time, which keeps me motivated to continue.”

Last year, like so many other athletes, Silvia and her team were no longer able to train together and adapted to virtual training on Zoom, so the past year has not stopped her from maintaining her fitness or netball skills.

Sheonah Forbes, England Netball Roses Academy Head Coach said, “The Roses Academy trial was full of exceptional talent and the long squad’s development both on and off the court, over the last four months, was demonstrated over the weekend.”

The Roses Academy squad attended camps in May and further camps are scheduled for July with the aim of selection for competitive competition in July. We congratulate Silvia on her selection and wish her the best of luck for the next stage of the Roses Academy!