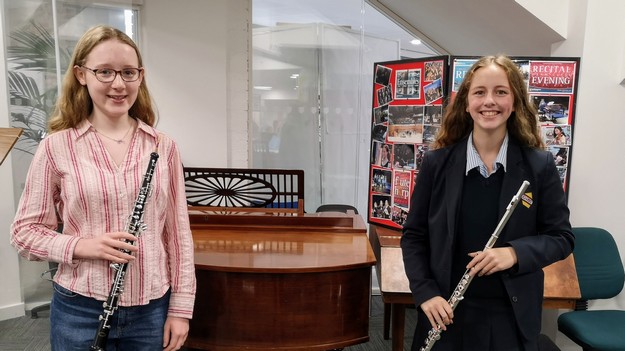 Two Withington pupils have been selected to play for Manchester’s prestigious Hallé Youth Orchestra. Talented pupils Anna G in Lower Sixth (oboe) and Georgia C in Year 11 (flute) recently auditioned and were both delighted to hear they had been successful. They will now have the opportunity to play alongside other gifted musicians from Greater Manchester schools and also the chance to play together with the main Hallé Orchestra.

Year 11 pupil Georgia has completed her flute Performance Diploma, which is the next level exam after ABRSM Grade 8. Georgia also plays the piano, the piccolo and the saxophone.

Georgia, who began learning the flute at the age of six, said: “For the audition, we had to prepare one solo piece of our own choice and two orchestral excerpts which were chosen for us in advance. There was also a short sight-reading passage that we were asked to play. I got the email to let me know I had been selected a few days later- it feels amazing to have been accepted into the HYO and to get the chance to develop my orchestral playing with some fantastic musicians.”

Anna, who is in Year 12, only started to learn the oboe two years ago and will be taking her Grade 8 exam later this year. She began learning the recorder at the age of seven and achieved her ABRSM Performance Diploma on recorder in 2019. She will also soon take Grade 8 piano and has been awarded the use of a Cor Anglais, an instrument very similar to the oboe, by the Cherubim Music Trust.

Anna says, “I chose to take up oboe because it has a number of similarities to recorder – there is a lot of music written for both instruments from the Baroque era, which I am very interested in.”

“The Hallé audition process was really straightforward and the day itself was made as relaxing as possible, considering the restrictions in place! I played a piece on oboe and a piece on Cor Anglais. I was delighted to be offered a place in the Youth Orchestra. I am really excited to have the opportunity to play in such a well-known youth orchestra and to be working with conductor Delyana Lazarova.  Initially, we will be rehearsing via a mix of Zoom and meeting in small groups at the Hallé’s rehearsal space, Hallé St Peter’s in Ancoats.”

A number of performances are planned for the Youth Orchestra – one in December and another in January 2021, when members of the HYO – COVID permitting – get the chance to perform on stage with the professional Hallé Orchestra. They are also hoping to perform a concert at The Bridgewater Hall in July.