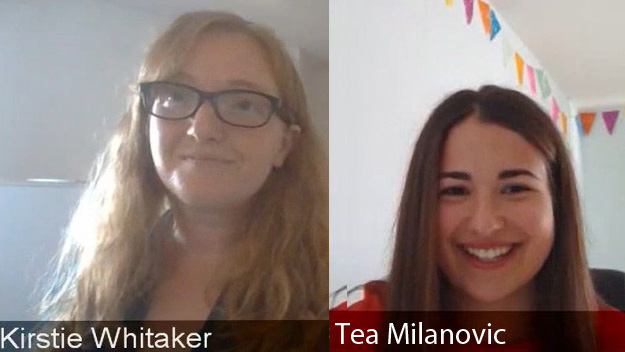 It was a proud occasion for Withington when the Manchester Lit & Phil, the first and oldest literary and philosophical society in Britain, ran its first ever online event featuring a conversation between a former and current pupil of WGS.

The live session entitled, ‘There are no adults: My journey to realising that no-one has a plan!’, was aimed at encouraging young people to consider a career in STEM. Dr Kirstie Whitaker (Class of 2001), who inspired Withington students as our Founders’ Day speaker in 2018, shared insights into her fascinating career journey with current Year 13 pupil, Tea Milanovic.

During the course of the interview she revealed to Tea that dance and choreography had also been a passion during her school years and she had considered the option of becoming a professional choreographer before opting to pursue a science degree. Kirstie stressed that her arts background had helped her to develop skills that she had not realised she would need as a scientist; the ability to write well and to present well. Creativity, she said, was a key part of being a scientist.

Kirstie also pointed out that, whilst it can appear that careers have been strategically planned, it is often about seizing the opportunities that come along. Admitting to finding it paralysing herself sometimes when faced with options, Kirstie advised, “Follow your joy because every pathway is going to give you pain, but know that there can be a joyful day along this journey.”

Tea has just completed her studies in Maths, Further Maths, Chemistry and Biology A Levels and hopes to study Chemistry at Imperial College London in the Autumn. As well as being awarded an Arkwright Engineering Scholarship, Tea has been accepted into McKinsey’s Leadership Academy 2020.

Mrs Haslam said, “We were delighted to be asked to take part in this event. We are extremely proud of Kirstie’s achievements and continue to follow her career with interest. We feel sure that this opportunity to hear in more depth about her career will have inspired many more young people to pursue their ambitions. At Withington we are passionate about encouraging all our students to be the very best that they can be in their chosen fields, regardless of gender or background.  Tea was an excellent choice to interview Kirstie. She is already taking steps to build her future career in the arena of science, and this was a most interesting and enlightening discussion.”

You can listen to the full interview on the Manchester Lit & Phil website, https://www.manlitphil.ac.uk/recorded-lecture-there-are-no-adults-my-journey-realising-no-one-has-plan.