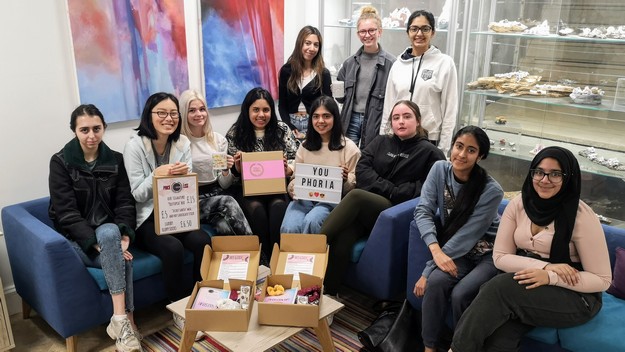 Both of Withington’s Young Enterprise teams have had a very successful year in 2019-20, winning awards at inter-school competitions, of which the concluding rounds were completed digitally. This did not stop our Withington team, YouPhoria, from progressing to the Regional Final, one step away from the National Final.

In the early rounds of the competition, the two companies, Lovender Botanics and YouPhoria, came away with three awards, reported here.

Next, it should have been the north & south Manchester finals at HSBC, Spinningfields. For obvious reasons, all companies were required to submit all parts of the competition digitally: Presentation, Company Report and Display Stand images. 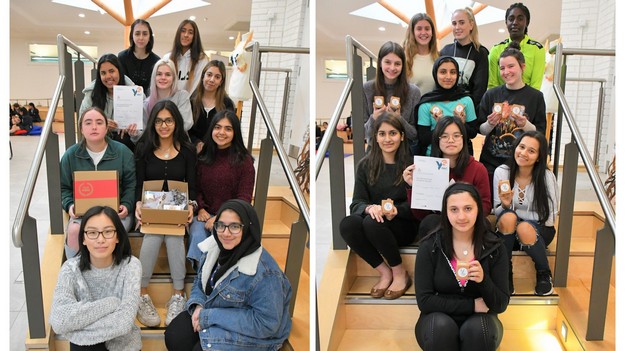 We are delighted to report that Lovender Botanics were awarded ‘Best Presentation’ and YouPhoria ‘Best Overall Company’.

This qualified YouPhoria to represent Manchester at the Digital Greater Manchester Final on the 30th April against 10 other companies from Bolton, Bury, Manchester, Rochdale & Oldham, Trafford, Salford, Stockport, Tameside and Wigan.

YE Coordinator Ms Ositelu said: “These teams have been fantastic and have really pulled together, using lunchtimes and staying after school to ensure that their digital submissions would be ready for the deadline. This is something both teams can be proud of and rejoice about at such difficult times! We are also very grateful to Withington parent, Mr Joel Rosenblatt, for his kind support of our Young Enterprise programme.”

At the Greater Manchester Final held on 30th April, YouPhoria were runners up, qualifying them for the (digital) North West Finals, which were held a week later.

The team, whose product is a self-care package containing a personalised positivity mug, a hot chocolate stick, luxury chamomile tea, a little book of positivity, a scrunchie and, of course, essential fluffy socks, proved to be a big hit with the judges and the perfect product to boost wellbeing in these uncertain times.

Two Awards at the Regional Final

At the Regional Final, eight teams from Cumbria, Lancashire, Cheshire and Greater Manchester competed in a final that had been due to be held at Lancaster University Management School on 6th May, but was still judged by Lancaster University’s Dr Li Xiao and LUMS alumna Alice Hackett, now of the Hut Group.  The teams competed across five categories – Teamwork, Sustainability, Marketing, Customer Service and Presenting. A true credit to Withington, YouPhoria won two of the five available awards: Best Customer Service and Best Teamwork.

Young Enterprise Coordinator Ms Ositelu said: “These awards really reflect the caring and empathetic nature of the team, something of which they should be very proud. Indeed, they did work so well together throughout the year and have always had the customer as their main focus. I’m so proud of their achievement and journey. They have been such a delightful group to work with and so have Lovender Botanics.”