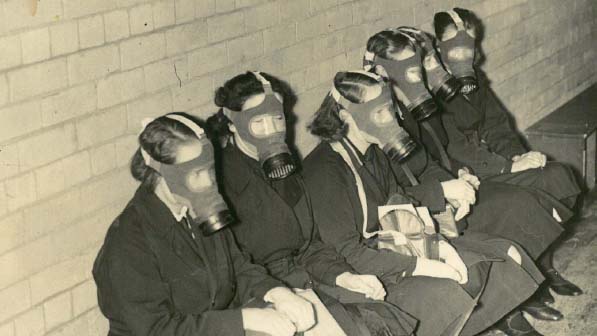 We marked the 75th anniversary of VE Day on Friday 8th May by looking back at how life and learning were affected for our school community during World War ll in our virtual assembly this morning.

The assembly took the form of a video using photos, first-hand accounts and artefacts from our archive to illustrate the extent to which school life and learning has been disrupted by national events in the past. Pupils and staff have had to adapt to a new and different way of life. It is clear that staff were as keen then, as now, that girls should continue to receive the highest standards of education possible in the circumstances.

A big thank you to Upper Fifth pupils Alice, Jodie and Raya, who intend to study A Level Drama next year, for taking the time to record voice overs at home and send them into school to be edited into the assembly. Likewise, to Mrs Berry, Mrs Edge, Ms Bowie and Ms Dalton-West, who brought the staff of the past to life. It is clear that the sense of community and resilience displayed then is still very much a part of the Withington of today.

Just as we were able to bring the Withington of the past to life through accounts that have been made and preserved for future generations, we hope to do something similar through our Journal 2020 project. Ms Baylis launched this initiative in an assembly last week and we hope that many students, parents and alumnae will contribute entries for the project. We wish to create a lasting legacy for future generations at Withington, so that they have an understanding of our experiences during this challenging time.

Withington’s Juniors have also been learning about the significance of the day that peace was declared in Europe in 1945, but were reminded that the War wasn’t quite at an end, even then, as the War in the Far East continued with peace there (VJ Day) only being declared in August 1945. Juniors received a special assembly and activities like making bunting, baking Churchill’s fruitcake, making Prue Leith’s flapjacks or even listening to a VE Day playlist. Girls were also encouraged to make time to talk to older family members about their war memories and how it felt when it was over. They were given guidance on questions to ask and encouraged to write down the stories lest they eventually be forgotten from their family history.

In addition, Year 6 pupil Inayah has written her very own song about VE Day!