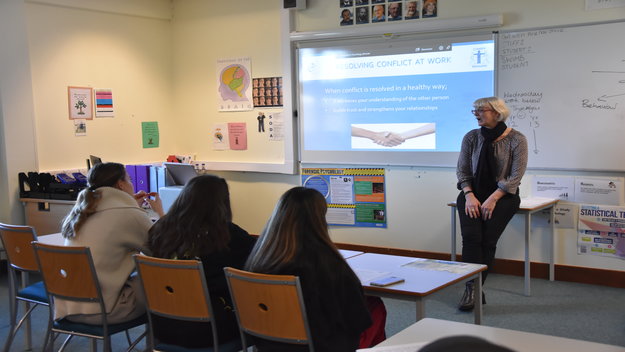 Withington celebrated International Women’s Day 2020 with a series of inspirational and thought-provoking workshops that encapsulated this year’s theme of #EachforEqual.

Twenty five speakers – members of our alumnae, parent community and local business representatives – volunteered their time to deliver a series of empowering equality-themed talks to WGS’s Year 12 cohort, with former pupil Joëlle Warren, MBE and Vice-Lord Lieutenant of Cheshire, presenting an insightful keynote speech in the Arts Centre during the lunch break.

In a series of interactive small-group sessions held to mark the occasion, the many achievements of women across the globe were recognised – but in keeping with this year’s IWD key message that ‘an equal world is an enabled world’, our Lower Sixth girls were also able to take away valuable lessons designed to equip them for their future lives and careers.

Topics covered during the event, which took place in School on 12th March, were Equality; Management; Resolving Conflict; Salaries; and Work-life Balance and included guidance on working in male-dominated sectors; how to get the best out of teams as a female leader; strategies for closing the gender pay gap and winning promotions; and how to balance work, life and family time effectively. 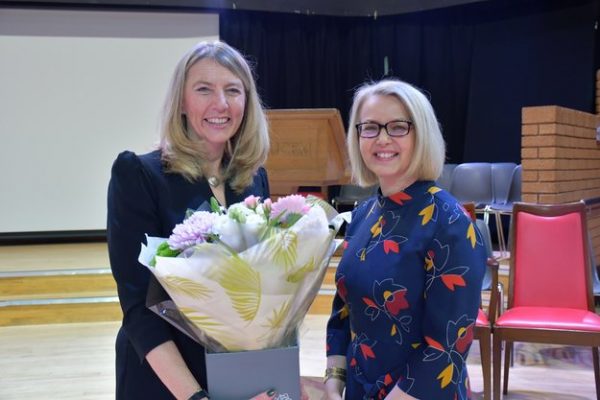 Class of 1980 alumna Joëlle, Executive Chair and founding partner of Warren Partners Executive Search, spoke of Collective Individualism – but calling on the audience to help to influence change, she pointed out that there was still progress to be made. There are currently more men in CEO roles in the FTSE 100 with the names Steven or David, than there are women in the top posts, she said; just five female leaders who, on average, earn 32% less than their male counterparts. And sharing anecdotes of her own personal experiences, she advised ‘don’t hold self-limiting beliefs; don’t fear failure and don’t lose sight of personal beliefs and values’. “Go for it, don’t be afraid,” she urged the girls.

Embracing the campaign mission to ‘Build a Gender Equal world’, our girls praised the event for shining a spotlight on important issues and for providing an environment in which equality and diversity are an integral part of the School’s ethos. Here are comments from some of the participants.

Ellie: “I think the biggest thing that I will take away from today is confidence. Through listening to the various talks, I have realised that it doesn’t matter whether I am male or female, I can just be confident in what I want and let my voice be heard.

Scarlett: “It was really inspiring to have so many women that are already successful within their own industry to talk to us. #EachforEqual is reflected at Withington by the number of girls studying STEM subjects.”

Fiona: “I think it is important that we celebrate IWD at Withington because we come from a school where female role models are of great significance. It is positive that we have knowledge of what will happen when we go on into the outside world and how to create an environment that is as supportive as is it here in school.”

Farah: “When we go into the real world, we will have to face obstacles in terms of being a woman and it is important to acknowledge how to overcome those. The biggest lesson I will take from today is the importance of work-life balance.”

Nadia: “I have learnt some important life skills today. Often women are criticised for trying to be assertive as they are mistaken for being bossy. After listening to these amazing women, I now have confidence in the knowledge that it won’t reflect badly on me to follow my own path because all people should be equal.”

Withington’s IWD event was organised by our Head of Careers Nicki Cottam in conjunction with WGS’s Development team.  Now in its 130th year, Withington is a school that from its foundation has put the rights, needs and aspirations of young women first, she said.

“It is our clear mission that we support our pupils so that they leave here as confident, compassionate, responsible members of society, armed with the self-belief and motivation to enact change that enriches their own lives and improves the lives of others. We want you to recognise your own unique worth and value, and to also recognise the qualities in others that make them unique. In understanding that when we all work collaboratively, rather than competitively, we can all move forward together, we can then work to fulfil the commitment to ‘rise by lifting others’.”

We’d like to thank the following for supporting #WGSEachforEqual on the day.