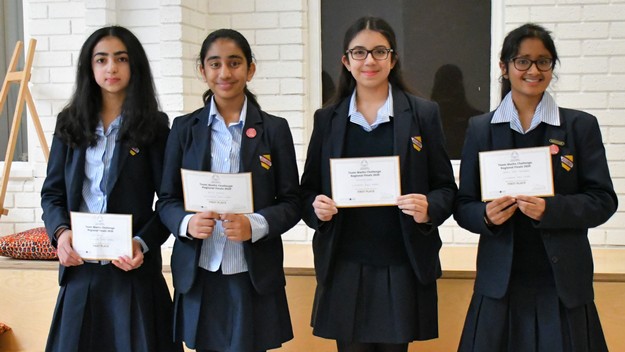 On 2nd March, our team of two Lower and two Upper Fourth girls went to the University of Manchester to compete in the UKMT Team Mathematics Challenge against 28 other schools from across the North West. We were excited to hear, during our preparation in the weeks before the challenge, that our WGS Sixth Form Maths team had already qualified to compete in their National Final! So, it was with anticipation that we took our places in the Great Hall to begin a day of challenging yet memorable problems that covered a wide range of topics.

After a quick warm-up, we started with the Group Round, which consisted of 10 questions that we shared and worked out between us. Finishing all the questions just before the whistle was blown, we watched in anticipation as our answers were marked, and we were very relieved to discover that we had made a good start that lasted throughout the competition. After completing the next round, the Crossnumber, where we only lost four marks with ten minutes to spare, we were delighted to find out that we had so far placed in the top ten. However, there were still two more rounds to go, and the first-place spot was still up for grabs! After a quick lunch, we got straight back to work with the Shuttle Round. This was very intense, as teamwork and speed were the keys to getting top marks, as well as added pressure to get the time bonus marks.

Not long after we had finished the Shuttle, the Relay round was upon us. After much running around and scribbling down of answers, the whistle was blown for the final time, and the total marks for the day were calculated. We waited in suspense, before finding out that we had won! It was a true reflection of Withington spirit, and with many thanks to Mrs Statter and Mr Parry, we will be going to Westminster for the National Final in June!