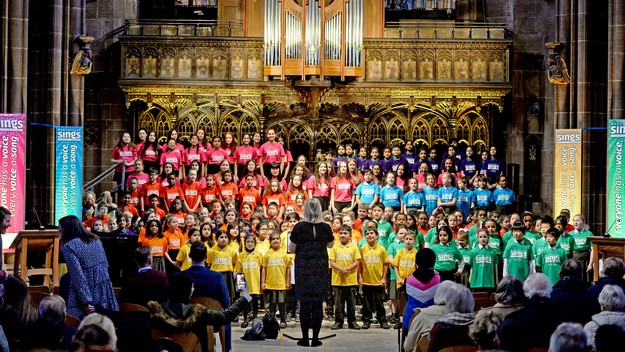 A sea of colourful t-shirts, lots of smiling faces and the heart-warming sound of a massed choir of young voices filled Manchester Cathedral on Wednesday 4th December as pupils from seven schools came together to perform for an audience of dignitaries, school staff, parents and Cathedral visitors at the inaugural Manchester Sings. 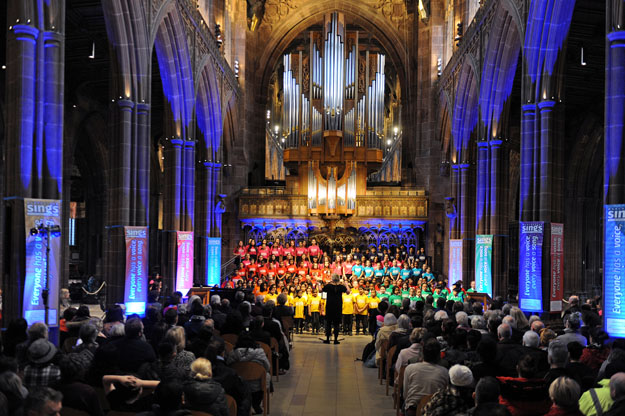 This exciting new schools’ partnership brings together pupils from primary schools across Greater Manchester and the Withington Girls’ School senior ‘pop up’ choir to perform a programme of six emotive songs that told a human story of dreams, life’s setbacks and, ultimately, hope. A series of readings, written and performed by Withington pupils, picked up on the themes expressed in the songs. Manchester Sings was attended by the Lord Mayor of Manchester, the High Sheriff of Greater Manchester and was opened with a welcome from the Dean of Manchester. 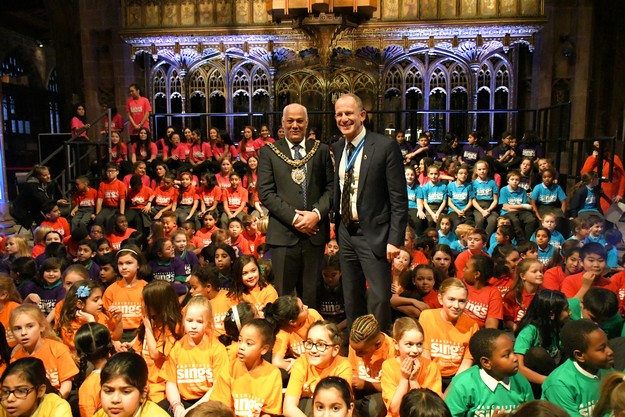 Withington Girls’ School’s Headmistress, Mrs Sarah Haslam, paid tribute to all involved in Manchester Sings. “Those who were fortunate enough to be in the audience were amazed that it was the very first time the pupils from the seven schools had performed the six songs together as a choir. We were expecting it to be a special performance, but the children exceeded even those expectations – they had memorised the words to all the songs and performed from the heart with such commitment. It was exceptional.” 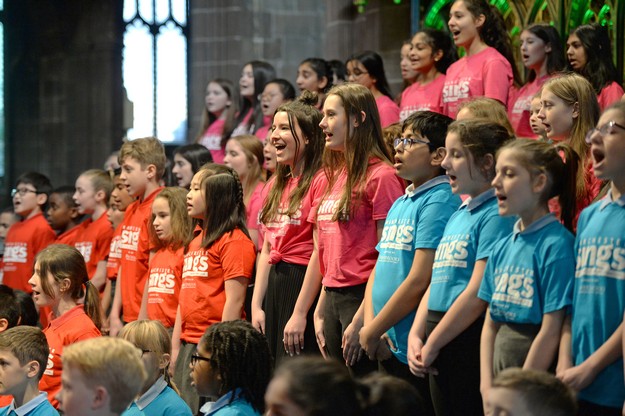 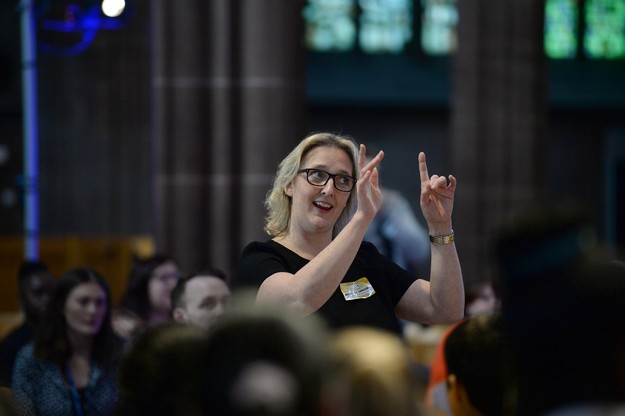 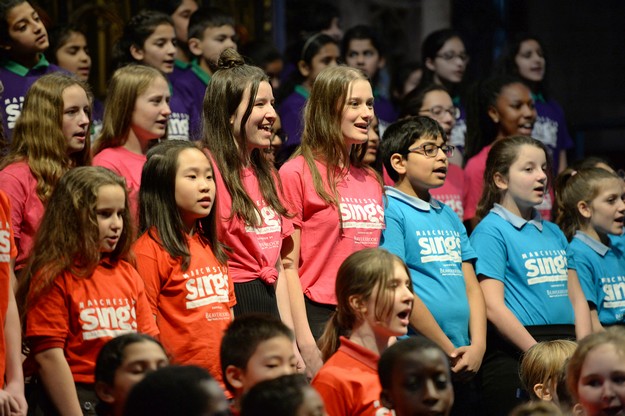 “Watching these children practising so hard, enjoying their music and growing in confidence has been incredibly inspiring.  I was particularly touched to hear one boy say to me, ‘I didn’t even know I could sing!’. It was wonderful to see these young pupils from different parts of Manchester performing as one with such passion and energy at this magnificent venue in the very heart of our great city. It was truly inspiring.” 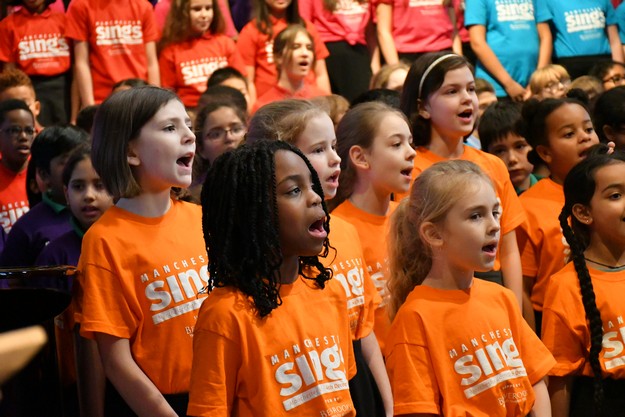 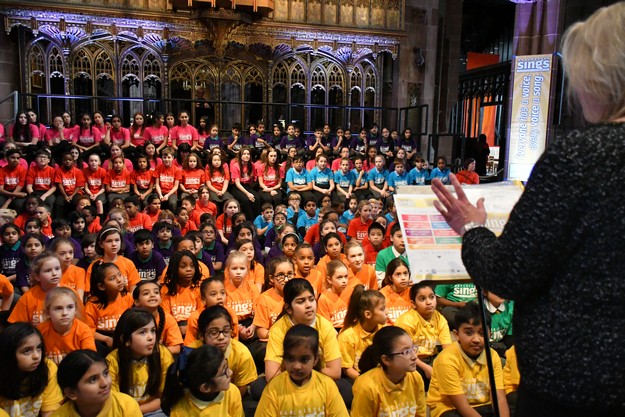 The medley, which began with Sing by Gary Barlow and Andrew Lloyd Webber, was designed to tell a story of hope, with all songs selected specifically for the poignancy of their words. Mrs Sargent added that she was delighted to have received an encouraging note from Lord Lloyd-Webber himself wishing the performers good luck with the event. 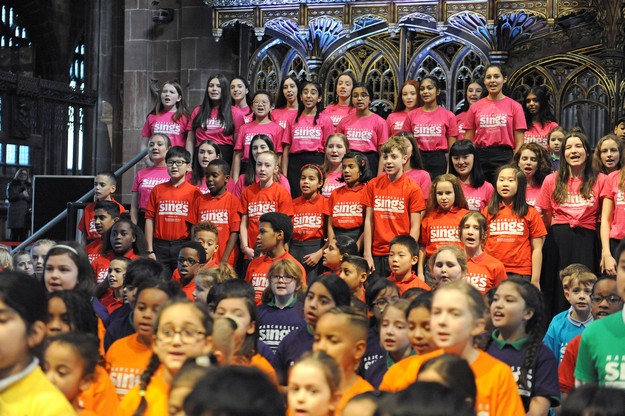 “Music is such a powerful force for good, it’s so many things to different people. Everyone has a voice, and every voice has a song – this is what we set out to capture with Manchester Sings. It is impossible to walk around our city and not be moved by the plight of the homeless and other vulnerable members of our community. We hope that, in bringing these schools together to sing at the Cathedral, we have done something positive to help. We’ve been very much encouraged by the response we’ve had and are aiming to make this a regular occasion,” said Mrs Sargent. 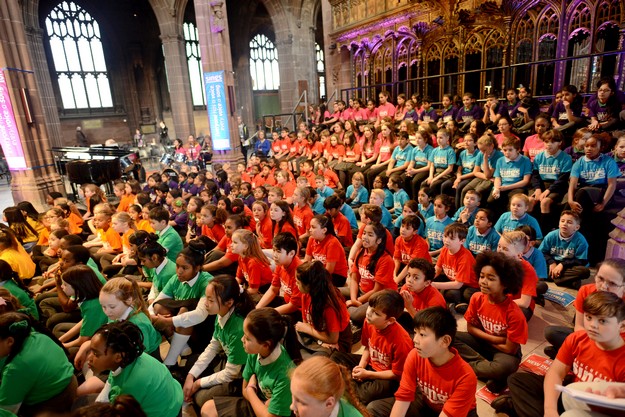 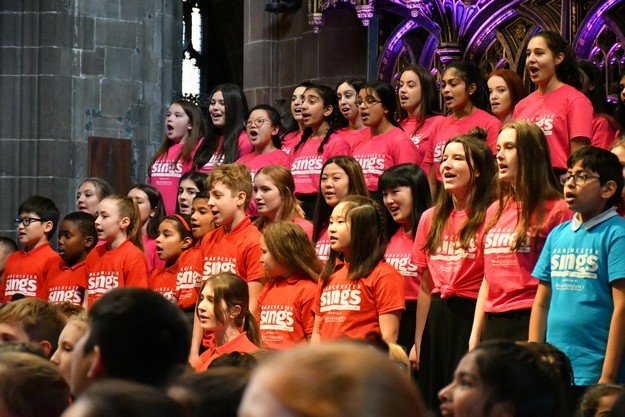 As the event neared its close, Withington’s Chair of Governors, Mr Malcolm Pike thanked the participants and said, “They talk about music being uplifting and bringing communities together and that was the perfect example. It was absolutely brilliant.” 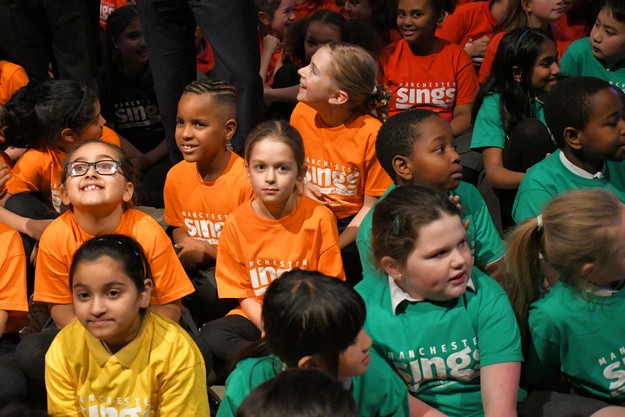 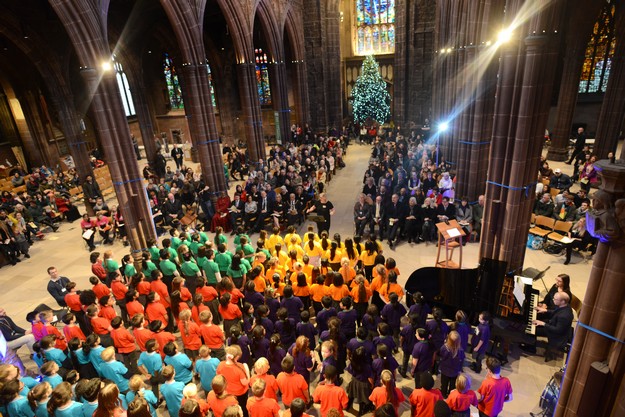 These views were echoed by staff, parents and pupils from the schools:

Ms Pat Stennett, Headteacher of Broadfield Primary School in Oldham said: “Manchester Sings is an event that embraces children of different cultures from across different parts of Manchester. It has helped our children to become aware of the whole community and of the need to support those less fortunate than themselves; values that underpin our school ethos – of equality, inclusion and diversity. And what a beautiful building, what better place to bring them all together to help these very worthy causes. It’s quite incredible to think that this is the first time they have all sung together – it’s been an awesome experience.”

Broadfield pupils shared their thoughts on the Manchester Sings experience:

Miss Melanie Michael, Headteacher of St Luke’s CofE Primary School in Bury said: “The experience has improved our choir’s confidence levels in terms of performing publicly and without a shadow of a doubt the children have loved the song choices and the buzz of performing in the Cathedral with other school children. Similarly, our staff team who accompanied the choir, just loved the whole experience.” 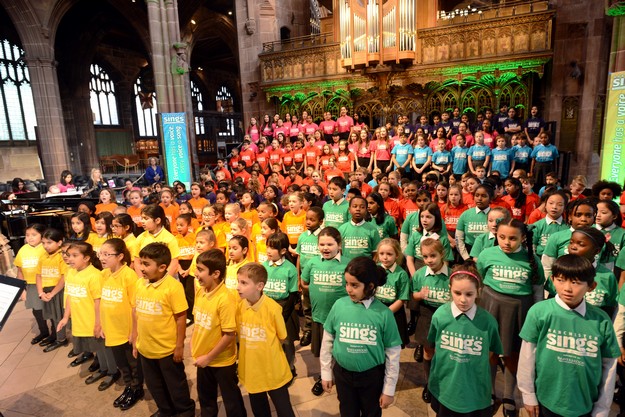 The enthusiasm of the Year 6 pupils from New Islington Free School in Ancoats shone through in their comments:

A New Islington teacher said: “It was a wonderful experience for our pupils – one that they will cherish.”

Twenty-six Year 5 children from Whitefield Community Primary (pictured in blue t-shirts) took part in the event and Headteacher Mr Martin Van Hecke said: “What a truly inspirational event for all involved. The opportunity to join together and sing as part of a much larger choir is something that will live long in the memory of all the children that took part. Words of hope and dreams sang in perfect harmony from our young children across Greater Manchester in a truly inspiring setting. A very proud moment for our families and children of Whitefield Community Primary School.”

A parent at Wilbraham Primary in Fallowfield wrote to the Headteacher, Mr Steve Wheeldon: “Your singing club teachers have done an amazing job, their faces were alight with pride watching the children sing. I’m so very proud and was super emotional watching it. I would love for you to pass on our heartfelt thank you to both the teachers and the school for bringing the joy of singing to (the pupils) of the school.”

Another Wilbraham parent whose children, aged seven and ten took part, commented: “This has been a brilliant experience for them. They’ve been rehearsing so hard at home and were both nervous and excited beforehand. But the performance was so joyful and it was lovely for them to be part of it.”

A St Luke’s mother, who described the afternoon as “absolutely wonderful”, said she had been moved to tears by the performance of the song True Colours.  “The children were all wonderful. It was clear to all that they had worked so hard to prepare. I am incredibly proud.”

A Withington parent said: “This was the best of performances. The co-operation between all the schools working together has been fantastic – and the message of peace and love that came across throughout the event was just so fitting in this great place. “

A total of £724.46 raised during a collection at Manchester Sings has been donated to the Booth Centre, a day centre for homeless people, while families supported by Wood Street Mission will benefit from over 150 gift donations by the Withington Girls’ School community to mark the charity’s 150th anniversary this year. Beaverbrooks The Jewellers is the sponsor of Manchester Sings. 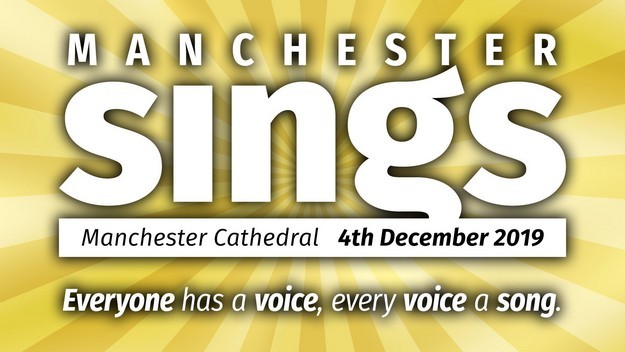 The Story of the preparation and build-up …

Manchester Sings is an exciting new schools’ partnership that will bring together around 200 pupils from six primary schools across Greater Manchester and the Withington Girls’ School senior ‘pop up’ choir to perform as a massed choir at Manchester Cathedral on Wednesday 4th December 2019. 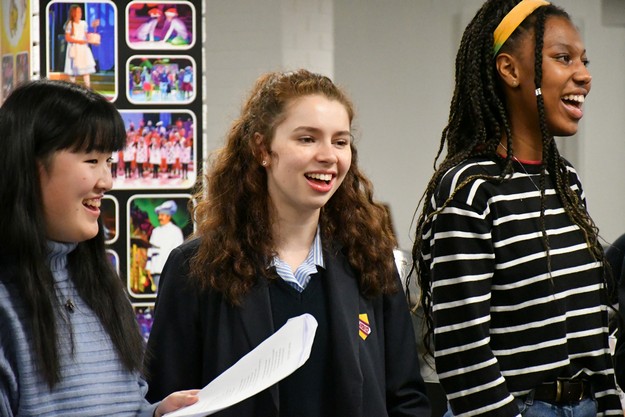 Members of the WGS Senior ‘Pop Up’ Choir.

The participating primary school choirs – from New Islington Free School, St Kentigern’s RC Primary, St Luke’s CofE Primary (Bury), Wilbraham Primary, Whitefield Community Primary, Broadfield Primary (Oldham) – have been busy rehearsing in recent months with Manchester Sings organiser and WGS Director of Music, Mrs Gilly Sargent. The first time they will all sing together, she said, will be at the event itself. 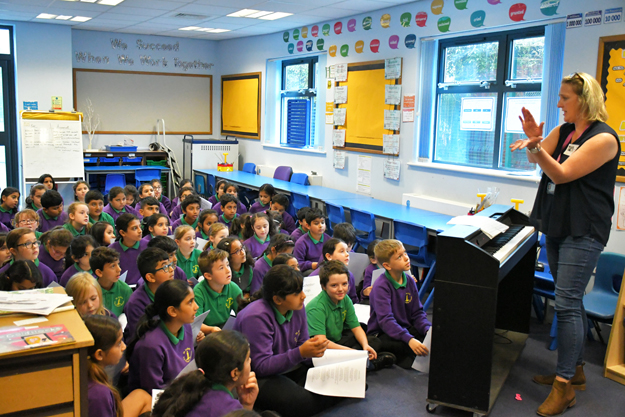 All proceeds raised during a collection at the concert will go to the Booth Centre, a day centre for homeless people, while families supported by Wood Street Mission will benefit from gift donations by the Withington Girls’ School community; a target of 150 Christmas gifts has been set to mark the charity’s 150th anniversary this year. Beaverbrooks The Jewellers is the sponsor of Manchester Sings. 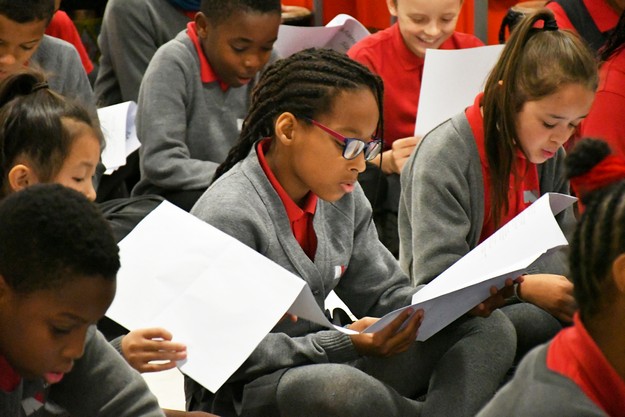