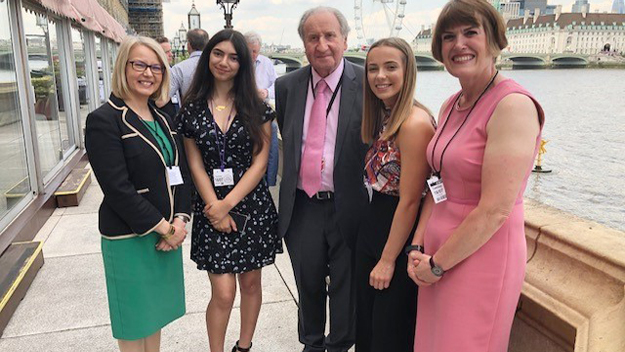 Our Lower Sixth Economics students were asked by Lord John Lee to give feedback on the early draft of his latest book, ‘Yummi Yoghurt – A First Taste of Stock Market Investment’. The students provided him with written feedback and he followed this up by attending one of their Economics classes to hear the girls’ ideas first hand.

The book was launched in the second week in July and Withington Economics students are acknowledged in its pages. Two of the girls, Eryn and Venos, along with Mrs Haslam and Mrs Senn, were then invited by Lord Lee to attend a ‘Champagne and Yoghurt Reception’ held in The Cholmondeley Room and Terrace of the House of Lords. Lord Lee is Chairman of the WGS Trust and was previously on the Board of Governors. His two daughters attended Withington. As an author, Lord Lee’s first book, ‘How to make £1m slowly’, was published in 2013. He felt that for some time there was a gap in the market for a book to help teenagers understand how the Stock Market worked. He decided to write a book and wanted to share his first draft with a group of Sixth Formers.