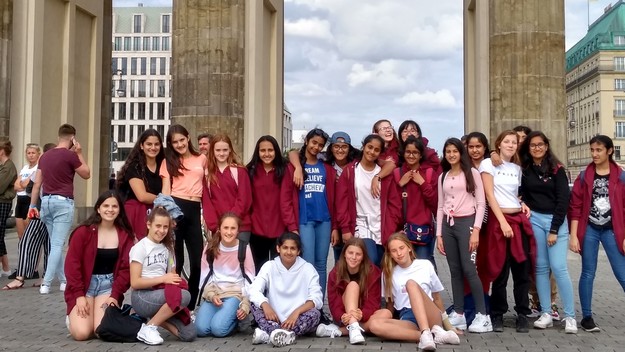 There were many highs during the five days that 22 students from Years 7 and 8 spent in Berlin at the start of the summer break (in the company of trip leader Frau Siddons, Mrs Kusznir and Herr Cumberford) and some of them were literally very high indeed! We got a breath-taking view of Berlin from the glass-domed ‘Kupola’ atop the Reichstag (German Parliament building), which looks like something like a spaceship inside, and where we were able to take the twisty path around the edge right to the highest point. 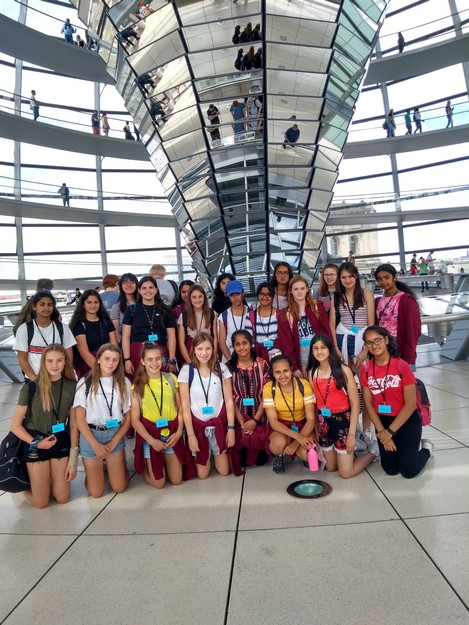 However, that was dwarfed by the iconic ‘Fernsehturm’ (Television Tower), where we found ourselves hurtling in a lift travelling six metres per second to the viewing platform near the top of this jaw-dropping and instantly recognisable structure which, at 368 metres, is the fourth tallest building in Europe.

Once we arrived at the revolving restaurant at the top of the tower, we took time out to indulge in the traditional German afternoon ritual of coffee and cakes – ‘Kaffee und Kuchen’, as the floor turned at a sedate pace of one rotation per hour, affording us a panoramic view of German capital. It is widely known that Germans are extremely organised, but even Frau Siddons was surprised when she needed to provide the details of the cake order almost one year before our visit. The lift operator on the way down was a little odd and tried to convince us that we were floating like leaves – not likely after all that snacking! 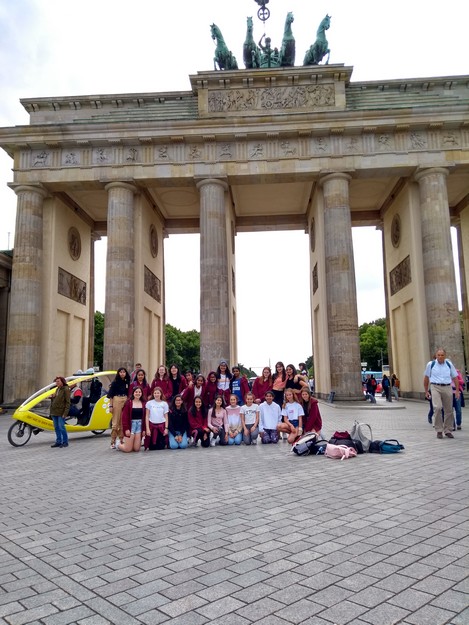 Back on the ground, we were sure to get our classic Team Berlin picture in front of Berlin’s most famous landmark, The Brandenburg Gate. During the Cold War, when communist East Berlin was walled off from the rest of the City, the Brandenburg gate stood right next to the wall and became a powerful symbol of the divided Germany.

Berlin always has something new to offer, and this year we were excited to be amongst the first visitors at the ‘Little Big City’ attraction. it is a model town like no other, taking tourists on a tour of Berlin through the ages. The exhibition is unflinching in its portrayal of sensitive but important themes, such as the way in which the city and so many of its inhabitants suffered under the rule of the Nazis and during the Cold War. 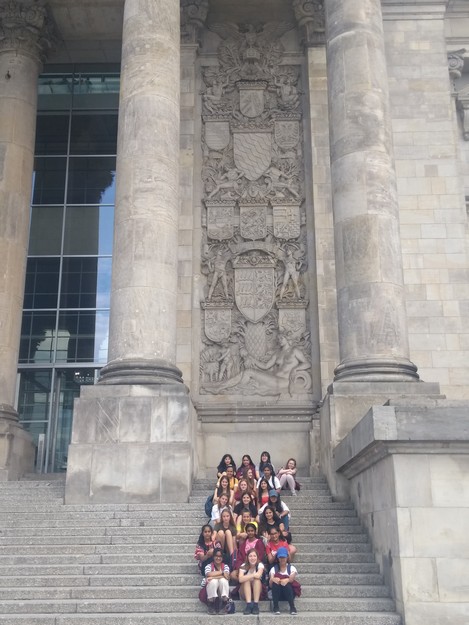 It is fair to say that whilst we took in a few museums on our itinerary, not one of them was traditional in its approach: the GDR Museum gave insights into everyday Communist life in the former German Democratic Republic, and Frau Siddons seemed particularly enchanted with the mock-up of a typical living room of the period, which reminded her of the lounge in her own family home, circa 1970.

The creepiest exhibit of all was Cayla the doll in the Spy Museum. Launched onto the toy market as a homework-help in 2015, tens of thousands of German children had already welcomed internet-enabled doll Cayla into their home when the German government discovered that her webcam was capable of spying on families in their own homes. In 2017, the German government gave an order that all households who owned the doll had to destroy it or face a fine of up to £20,000 and two years in prison. We couldn’t help but feel that she was listening to us through her glass case in the museum, which also had spy pigeons and a bra that took secret photos of enemy agents.

One of the challenges facing us was using our German language to buy our own lunches from a food court – whilst some of us went for tried and tested pizzas and burgers, others took the plunge and went native with the Currywurst, Berlin’s iconic curried sausage. 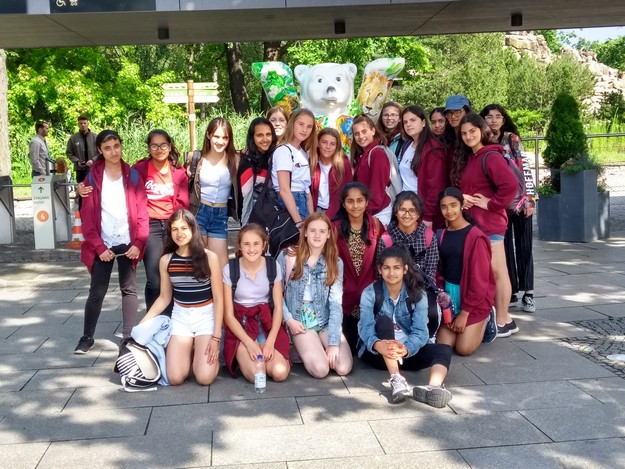 A torrential downpour didn’t dampen our enthusiasm for Berlin Zoo – the rain didn’t seem to deter the animals either, and we were able to enjoy the antics of the elephants and gorillas in particular. Seeing the two beautiful pandas at Berlin zoo up close was a special moment for many of us. It is not often that zoo animals get involved in international politics, but that is exactly what happened in 2017 when the panda couple, Meng Meng and Jiao Qing, arrived in Berlin after a long flight from China, accompanied by the Chinese President and greeted by German Chancellor Angela Merkel at the airport. The German people fell in love with the endangered black and white bears, and they paved the way for new dialogue and trade deals between Germany and China. The phrase ‘Panda diplomacy’ was born. Since our visit we have been delighted to learn that two panda babies have been born to the pair. 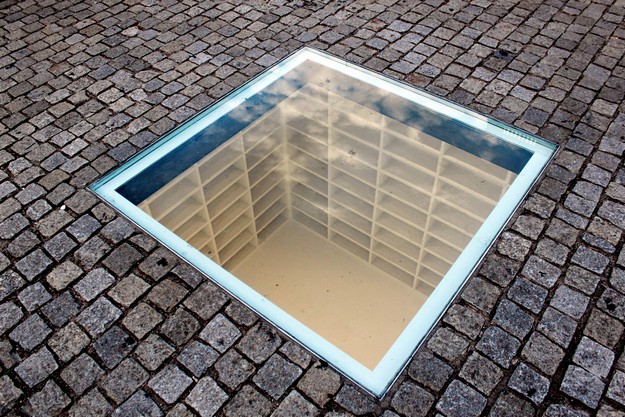 Berlin is full of stories and memories of the past, some of which are tragic. We went to Bebelplatz, the square in front of the University where, in 1933, the Nazis organised a burning of books by hundreds of authors of whom they didn’t approve, in an escalation of racial and religious hatred, and persecution of minorities. This event is marked by an underground artwork, visible through a glass floor, comprising hundreds of empty bookshelves. A plaque reads ‘That was just the beginning. In a place where they burn books, they end up burning people too’. 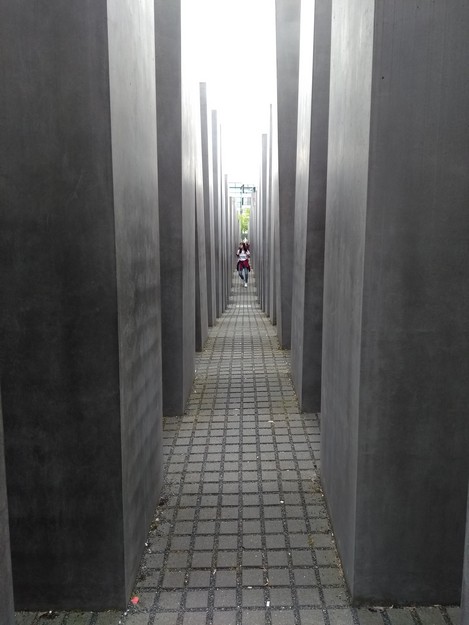 The Monument to the Memory of the Murdered Jews of Europe left a lingering impression on us. The Holocaust, where millions of Jewish men, women and children were murdered by the Nazi regime is a terrible chapter of modern history and it was very important to the German government that there was a memorial in Berlin City Centre; the competition to design it was won by the New York architect Peter Eisenman. As we walked within its huge maze-like structure amongst 2711 concrete slabs of different heights, each tilting at a slightly different angle, some of us felt a little lost and overwhelmed, as each of us thought about the topic in our own personal way. Afterwards we visited a Holocaust museum next to the site. 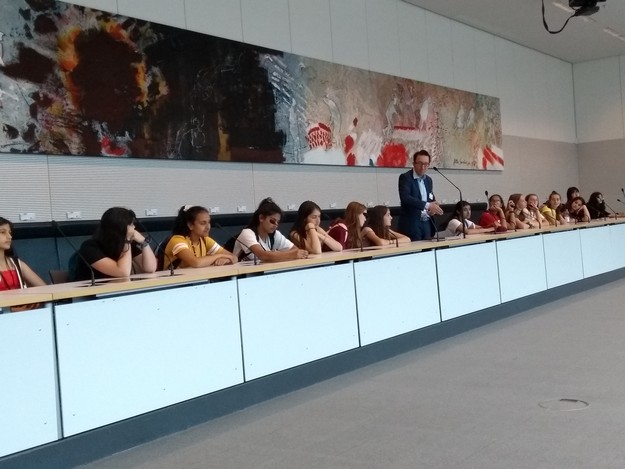 Our visit to Berlin gave us plenty of food for thought about political freedom and its opposite: during our visit to the Parliament buildings, we were allowed into one of the committee rooms, where we got to sit in the chairs where politicians debate on the important issues of the day, and even had a go at starting a debate ourselves. Seeing democracy in action was a big contrast to the sights on our visit to a memorialised section of the Berlin Wall at Bernauer Strasse. Barbed wire, dogs, huge spikes in the grass, landmines and gun towers were used, preventing the inhabitants of East Berlin from climbing over the Wall, although, officially, its alleged purpose was to protect them from threats from the West.

Throughout the week we ran a competition to see which group of roommates could keep their dormitory the tidiest – Mrs Kusznir in particular was a judge with a keen eye for detail. We knew that ‘Withy’ girls were capable of high standards, but as the doors to each room were opened and our senses were caressed by classical music, wafts of perfume and tableaux of teddies reading newspapers, we were unfailingly impressed!

The dazzling variety on offer in Berlin proved as alluring as ever, and many of the girls (and staff) left vowing to return. Many thanks to Mrs Kusznir for accompanying us and to Frau Siddons for leading the trip and coming up with such an imaginative and stimulating itinerary.