A ‘Wet and Wild Trip’ to Chester Zoo 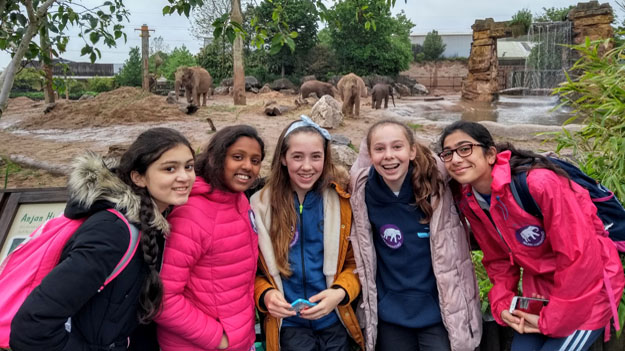 On the exciting, but quite rainy, morning of 12th June, we departed at 9am to visit the cute animals of Chester Zoo and to learn about classification.

The journey took about an hour and when we got there we were quite relieved because we had a lesson inside which meant that we wouldn’t get too wet considering the first thing we saw were gigantic puddles.

We settled into our chairs when the lesson started and a nice lady from Chester Zoo taught us all about Carl Linnaeus, the person who invented classification, what it is, and why we need it. Then we got some fake skulls to classify which was fun because it helped us to work together, test if we had understood and continue to make connections with our friends. 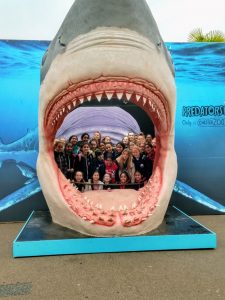 After we downloaded the Chester Zoo app, which gave us a map and lots of interesting facts about all the animals who are home to the zoo, our science group split into small groups and we got to freely walk around the zoo. Our group spent a lot of time near the aquatic section and we found out that in the aquarium there hid seahorses, which have an average height of 35cm and that all of these seahorses at the zoo have a diet of tiny marine invertebrates! We also found out some devastating facts like: “there is pollution and extensive habitat loss resulting from coastal developments and destructive fishing techniques” and “potentially unsustainable collection for international trade – including private aquariums, Chinese medicine and curios (dried and sold as gifts.)” I think we are all aware of some species becoming extinct because of pollution and that some human activities like building beachfront homes, the construction of hotel and restaurants, and that as coast lines develop it gives us more room to do these things which destroy the environment, and which is the natural homes for animals such as seahorses meaning in a sense we are leaving them do die homeless. Although these creatures are not all that endangered, its nice to see that there are people, like those who work at the zoo, who care about these creatures. We learnt that classification helped save an endangered species of birds called the ‘Ecuador Amazon Parrot’, because before they did not have their own species and were denoted by a capitalised name (Genus the category before Species) and everyone thought there were millions of these birds because there were other parrots who looked and acted very similar to theses ones but as it turns out the Ecuador Amazon Parrot is slightly different to all the rest, therefore it got granted its own species. Sadly, the team at Chester Zoo then found out that there were only 600 estimated Ecuador Amazon Parrots left in the wild! If the 2014 team at Chester Zoo had not decided to investigate these bird, the beautiful Ecuador Amazon Parrots could have died out without anyone knowing they existed.

At the aquarium there were also some stunning Denison’s Barbs who are characterised by a torpedo shaped body, red and black horizontal lines running through its middle, and dabs of yellow on its tail. There were also clownfish, every one of which was called ‘Nemo’! This is but to name a few of the aquatic creatures we saw but I must not forget to mention the Humboldt Penguins, which were the liveliest creatures that we came across on our whole expedition. We later found out that these penguins had just been moved to a new area and they seemed to have settled in well to the new environment. I really liked this because it reminded me of all the Year 7s and how we have come to enjoy Withington so much. 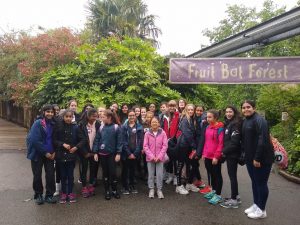 After our aquatic adventure, all of the Year 7 science groups met up at the Oakfield, which is a café at Chester Zoo where we greatly enjoyed the rest and super delicious food! Then we got back together in our groups and this time our group all stuck together, and the teachers took us to the bat cave, which we needed to be supervised in because it was quite dark; it was the bats natural habitat and due to this they were let out to fly around this enclosed home. It was quite terrifying but after a while you got used to the screeching of the bats and I luckily managed to spot one in the dark, although it was hard to tell which species of bat it was because I had never actually seen any bats close up until that moment. It did look extraordinary.

After the bat cave, our journey was coming to an end and so we had about 10 minutes until we had to meet up at the shop, where we could buy lots of Chester Zoo merchandise. We then got ready to go back to school. Our group split up again and so some people continued to slowly make their way back to the shop and others went to do some face painting. We decided to see if we could spot any more animals and so on the way, we saw a zebra and found out that they are black with white strips, not white with black strips according to much debate between scientist. We also saw some lions eating very peculiar looking raw meat and a howler monkey, unfortunately it wasn’t the howler monkey where its howl could travel for up to 3 miles. So sadly, that’s all we saw and all the facts we found out about before we had arrived at the shop, were we bought a bag full of memories to commemorate the trip. 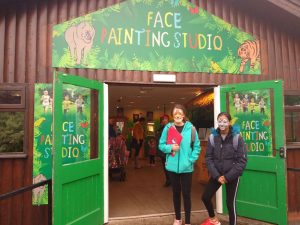 It really was a fantastic trip and I would like to thank all the teachers for organising it and taking us there and the Chester Zoo staff for being really friendly and informative, but most of all the animals for being great in photos and just for being themselves. This certainly was one of my highlights of the year and I’m sure everyone in Year 7 thought the same.

Here are some comments I have gathered from two people in my class to show what they thought about the trip:

“It was an educational but fun experience. The educational part was during the lesson we had about classification. I learnt so much and it was an amazing learning experience! I loved seeing all the animals as well.” – Aneeka 7W