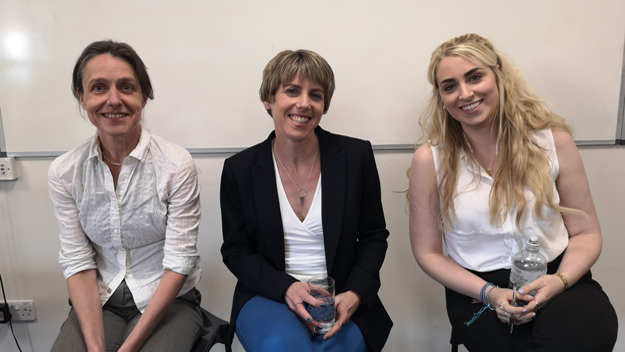 Today, Withington welcomed back three former pupils for the second Sandra Chalmers Lecture Programme, following on from the Spotlight On… TV & Radio Broadcasting event held in 2017. Sandra Locke Chalmers (Class of 1958), who sadly died in 2016, was the first female manager of BBC Radio Stoke, and former Editor of BBC’s Woman’s Hour. (The lectureship was established in her memory with special agreement from her sister Judith Chalmers and family.)

Our speakers represented three different specialisms in journalism. Janet McBridge (Class of 1982), International Enterprise Editor at Reuters Investigates and double Pulitzer Prize winner, talked about the dangers journalists face in delivering accurate news and exposés around the world. Judith Moritz (Class of 1995), North of England Correspondent for the BBC, discussed the issue of fake news and the importance the BBC places on ensuring accuracy. Sophie Zeldin-O-Neill (Class of 2008), Membership Community Editor at Guardian News & Media, rounded-up the evening, linking CP Scott’s legacy at Withington and his presence at The Guardian today.

Our speakers affirmed how important it is to maintain high journalistic standards in the face of changing technology. Each discussed Scott’s famous statement, “Comment is free, but facts are sacred”, a quotation that can still be found on The Guardian’s website today.

Janet McBride said, “CP Scott’s words are truer today than they have ever been.” At Reuters, Janet works with colleagues to manage international networks such as CNN. “It’s important to seek the fact. Where does the truth lie? If you hold on to the truth, you have a better chance of being published, and holding the authorities to account. The truth is our friend.”

She talked about the huge opportunities technology can bring, including social media intelligence scanning and drone usage to expose fake news. “My mission is to make sure that people can’t say, ‘they didn’t know’. As journalists, our profession is telling the world facts, so you can’t say you didn’t know.”

Judith Mortiz, a familiar face on BBC News, explained how her career has coincided with the rapid rise in technology and delivering news in a crowded marketplace. Acknowledging CP Scott’s quote, she said it should be updated to, “Comments are constant, but facts are worryingly scarce.”

“The BBC defines fake news as propaganda and purposely incorrect information put out for a reason. The BBC produces guidelines to all journalists, because it is important for the BBC to promote the truth.” Judith explained the role of departments such as the BBC User Generated Content (UGC) Hub, which seeks to gather and verify audience reaction to news stories. She also mentioned BBC Reality Check, open to all, which examines the facts and claims behind a story to determine whether or not it is true.

Judith says, “You can debunk fake news by discussing it. The BBC has a public duty to expose and debunk fake news, although it can be difficult to keep pace with the creation of fake digital imagery.” She recommended the BBC Young Reporter Scheme to pupils interested in journalism and to visit the BBC website for resources on reviewing fake news.

Our youngest speaker, Sophie Zeldin-O’Neill, talked about the first steps in her career when she lived in London, having gained an MSc in Journalism.

“Getting a start in journalism is difficult – in London, you are a small fish in a big pond. To begin with I worked for local papers, where you quickly learn to meet deadlines and improve your copy skills. I then got a job on the night team at The Guardian, which was really exciting. I was lucky to work from the front desk and got to see all the news stories as they were breaking.” Sophie expressed her appreciation for CP Scott, covering the main points from his centenary essay published in 1921, which is still considered to be the blueprint for independent journalism. She used them to illustrate The Guardian’s investigation into Cambridge Analytica, a story with which she was involved. One of her tips for aspiring journalist was to try and specialise.

“Write about things that excite you and that you know lots about. Be an expert. Get some experience, but don’t expect to get paid for it at first. Dream big!” She also paid tribute to Withington Girls’ School and how it felt to be part of the alumnae.

“We’ve got some brilliant alumnae and we should all be proud and confident for having been a Withington Girl. We are a special bunch!”

The presentations certainly inspired the audience. During the ‘Q&A’ session, pupils and parents asked insightful and enthusiastic questions about careers and investigating the truth behind fake news. The Development Team and Mrs Nicki Cottam, Head of Careers, would like to say thank you to our speakers for generously giving up their time.

The digital recordings of the event are available on request from the Marketing and Development team.