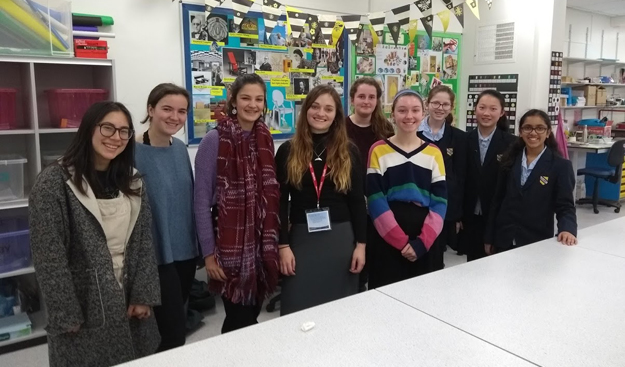 Suzie Hall’s love of the ocean has played a huge part in her life since leaving Withington and, today she returned to School, where she spoke passionately about her conservation initiative, ‘Plastic-Free Me’ in both Senior and Junior morning Assemblies.

Her career path was a not straightforward one. She found her passion for the ocean when she joined the Scuba Club at Leeds University, where she earned her master’s degree in physics. After leaving university, she spent time volunteering in marine conservation and eventually sold nearly all her possessions to fund travelling far and wide in the cause of marine conservation. Suzie emphasised to the girls, that no matter what your degree background, there are opportunities to apply your degree skills and work for the environment. Having qualified as a scuba diving instructor, she took part in scientific diving and became a Marine Mammal Medic, which means she can attend stranded whales and dolphins in distress.

Suzie spent a couple of years blogging about orcas, after becoming involved with campaign, ‘Orca Aware’, a campaign sponsored by British Divers Marine Life Rescue. Her blogs opened a new research opportunity for her at OrcaLab, in Vancouver. In Assembly, she introduced a short video about the lab’s vital conservation work on the preservation of the orca habitat, including its network of underwater microphones and cameras used to track and listen to orcas.

In 2017, Suzie and her friend Harriet set up ‘Plastic-Free Me’, a volunteer led initiative, for those passionate about protecting our planet. As keen Scuba divers, Suzie and Harriet often saw first-hand the damaging effects of plastic on the oceans and wildlife. Frustrated by the amount of disposable plastics available in day-to-day life they have launched a series of initiatives to encourage everyone to get involved. Please visit www.plasticfreeme.org/ for further information.

Suzie explained in her ‘Spotlight On’, A Whale of a Time… article for Withington Onwards 2017, “I remember having Sustainability Week at Withington. It’s was a great way to spread awareness of environmental issues. If we’re truly going to tackle plastic pollution, then every week needs to be Sustainability Week!” Suzie also spent time with Withington Eco Society members talking about their ideas for raising awareness about environmental issues in School. For further details about WGS latest environmental initiatives, please visit here.