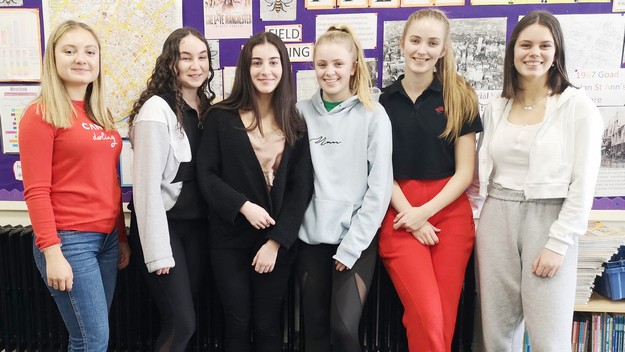 Year 12 Geographers took on the challenge of debating against a team from The Manchester Grammar School at an event staged in the MGS Theatre on 7th February.

Opposing the motion: The world population 10 billion: This house believes the world can handle projected population growth, the  Withington team members prepared well and each one delivered her arguments persuasively. They then fielded numerous questions from the floor, critical ones from the MGS supporters and more supportive ones from our own Sixth Form supporters, creating some friendly rivalry. 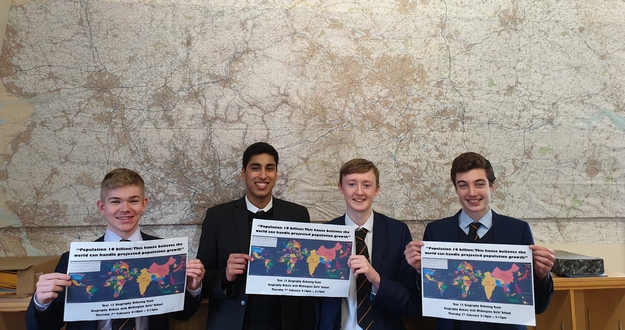 Elena M, our first speaker, looked at the old Malthusian concept of inevitable resource depletion which is becoming a stark reality in parts of our current world, whilst Sophie R followed on painting a picture of the broader environmental catastrophes so many people would create, including the issues linked to global warming. After a short recess to consider the boys’ viewpoints, Freya M delivered a thought-provoking scenario of the associated lifestyle that accompanies economic development, leading to mass consumerism with fatal consequences for the future.  Charlotte M closed our opposition case by considering demographic changes, accompanying development and the huge challenges an ageing population would create for our planet, for example, high-dependency ratios meaning the working population would not be able to provide for burgeoning older dependents.  They created four impressive scenarios of a frightening unsustainable future that made the audience sit up and think technology was not always going to be the answer.

Mrs Buckley said: “The girls were wonderful ambassadors for Withington and for Geography. They prepared some highly convincing and well-researched ideas. The girls also asked some very insightful and pertinent questions to challenge the boys and held their own wonderfully well when questions were fired back at them.”

The voting involved people at the start deciding in a secret ballot if they supported the motion or not before they had listened to the Debate and then, once the Debate was over, the audience voted again to see if the speeches and questioning had swung opinions. “Withington swung the vote most convincingly and with a majority audience of MGS boys, that was not an easy victory! We were very proud of the team as they had faced some very strong competition, the boys were well prepared had strong, well-supported ideas and tough questioning tactics.”