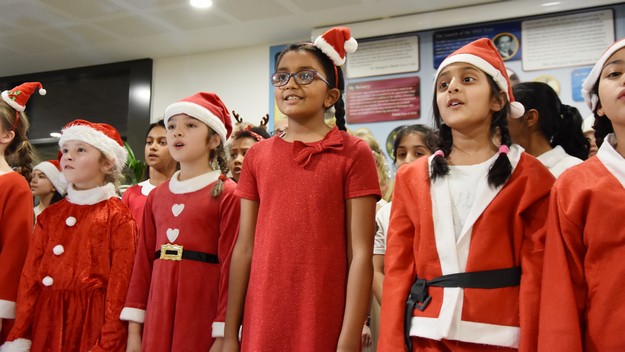 Christmas 2018 blog: We will be adding to this page as events unfold. With the arrival of December this year, Withington began preparations for all things festive in the build up to the end of term’s Christmas celebrations. Once the dust had settled after Founders’ Day, the Music Department began preparing its famous Christmas repertoire with rehearsals for orchestras, choirs, ensembles and bands popping up all over the School. Over 200 WGS musicians have now put their diligent practice to good use and performed in several concerts over the past few weeks. From carols at St Ann’s Church in Manchester, to a festive tea party for the local elderly community, the Junior and Senior Christmas Concerts, to the build up to the competitive House Carol Competition, Withington has been bursting at the seams with Christmas spirit! The most recent post is at the top. Scroll down for more Christmas news and videos!

It’s the last day of the autumn term which can only mean one thing – the annual House Carol Competition! Every house showed creativity and imagination with their carols, and there was some excellent staging, confident singing (and rapping!) and plenty of team-work on display. 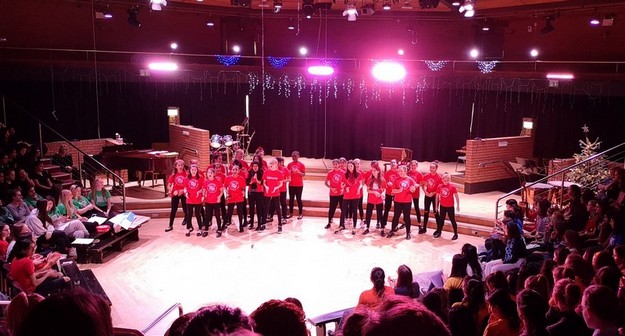 But, there can only be one winner, and this year it was Lejeune who came out on top! Well done to everyone involved, and thank you to our new staff choir who entertained the audience whilst the judges were deliberating the result. 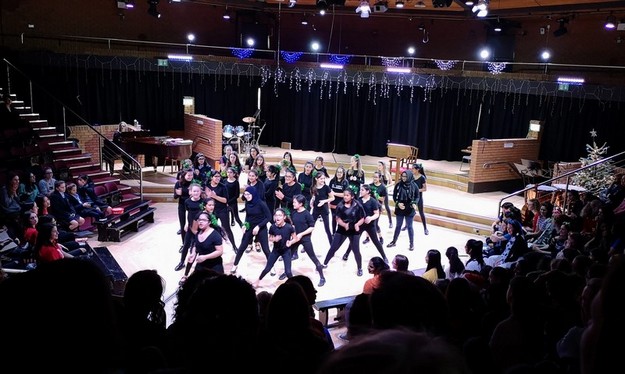 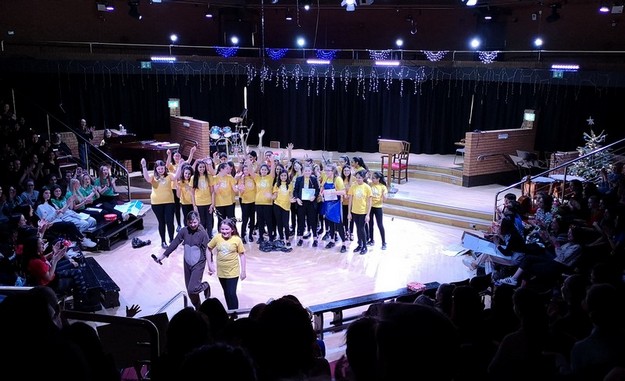 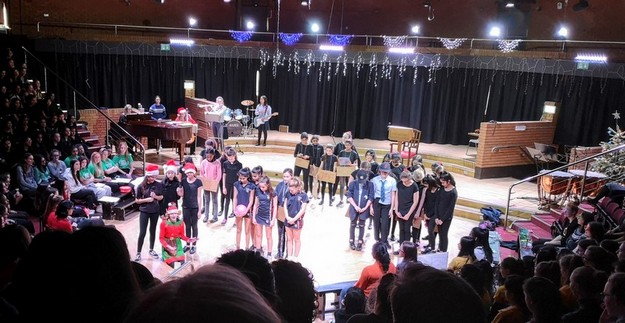 Our Chamber Choir and Orchestra brought some festive cheer to patients, staff and visitors at The Christie this morning.

We had a lovely Christmas sing-along in Assembly this morning. Merry Christmas Everyone! 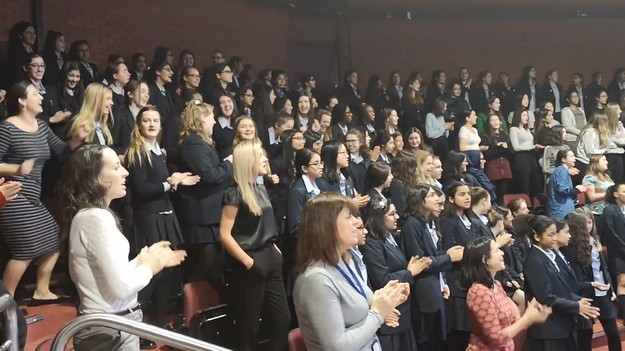 The whole Junior School went to see the Sleeping Beauty pantomime at Stockport Plaza in the morning. (Oh yes, they did!)

They were in great spirits in the afternoon when they enjoyed the challenge of the early rounds of Christmas House Quiz. The Final is due to be held on the last day of term!

Everyone is wearing fabulous festive jumpers today! Lots of fun and £750 raised for Save the Children. Merry Christmas everyone! 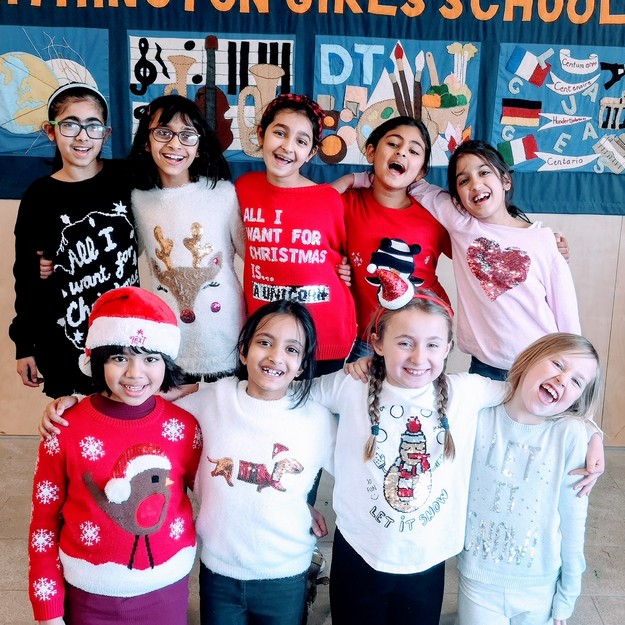 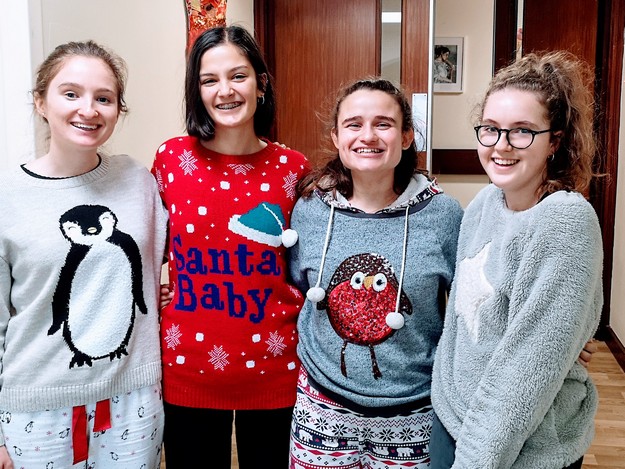 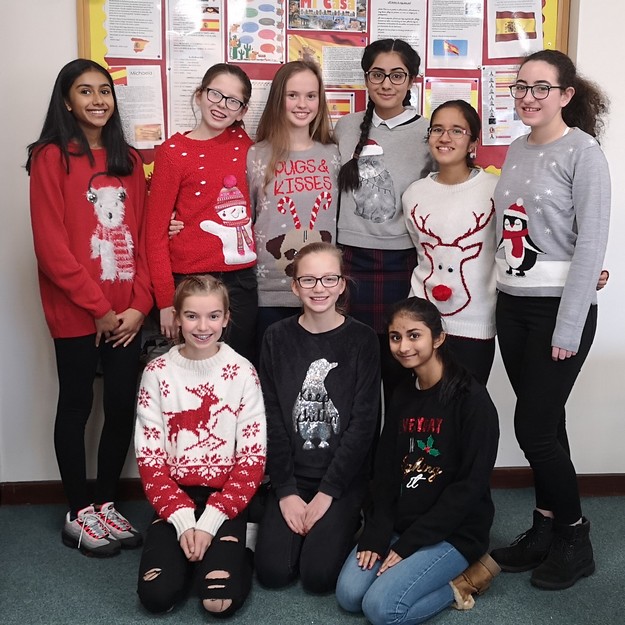 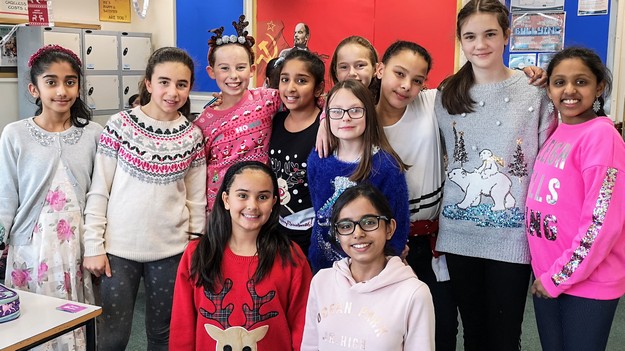 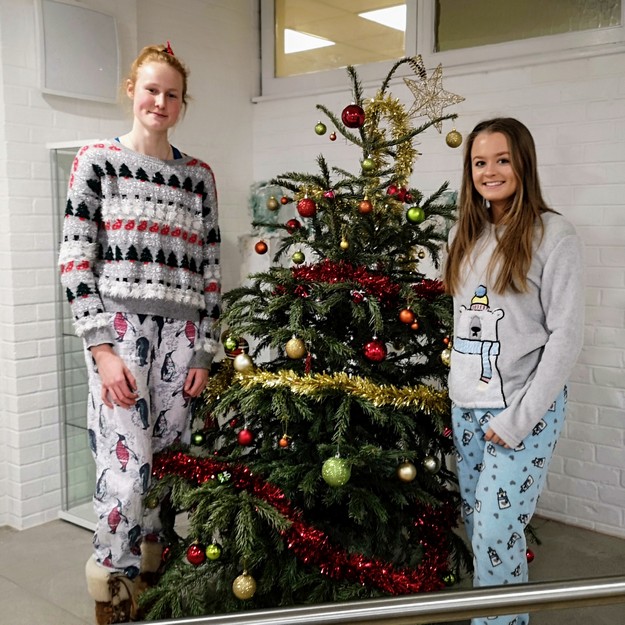 ‘Twas the Night Before Christmas – The Junior School Christmas Concert

The Arts Centre was full of Christmas cheer and excitement on Thursday 13th December, when the Juniors’ Concert, ‘Twas the Night Before Christmas took place. Girls from Lower II took the parts of carol singers and performed the traditional poem to the tunes of different Christmas carols (as arranged by Mrs Sargent).

At different points of the poem, the carol singers paused to welcome each class onto the stage, who then performed amazing song and dance routines to well-known Christmas songs that each related to a particular section of the poem. There was even a special visit from Father Christmas himself, along with his eight reindeer who made their way on to the top of the Arts Centre roof where all their troubles seemed to ‘just drift right into space’. It was a wonderful, festive evening, enjoyed by all and a great way for the Juniors and their families to come together to celebrate the Festive Season. 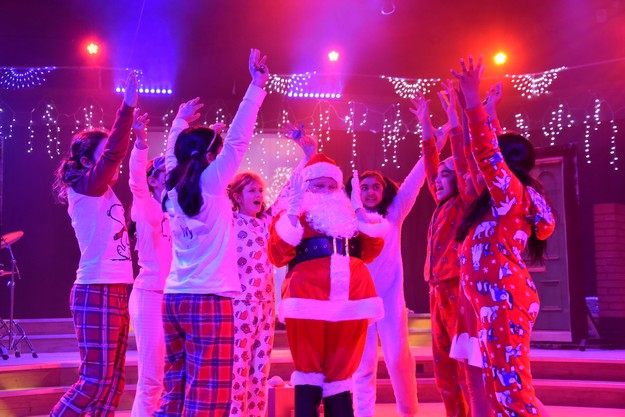 Every seat was filled with friends and family for the Senior Christmas Concert held on 11th December. The stage itself was packed full of musicians of every kind: From Stage Band to Oboe Ensemble, Vocini to Middle School Strings, an incredible array of talent was laid on for the audience showcasing the real breadth and depth of Withington’s Music Department.

The much-anticipated 12 Days of Christmas was spectacular as always, as Mrs Sargent managed to get the entire audience up on their feet joining in on the various actions. We were also treated to a fabulous performance of My True Love Gave to Me, this time by a Christmas-jumper-clad Year 8 choir, and during the interval, to performances from two newly-formed Year 10 bands, with their renditions of some classic hits. The concert was once again a huge success and closed, as always, with Shakin’ Stevens’s Merry Christmas Everyone, fully equipped with some impressive pyrotechnics and glitter cannons. 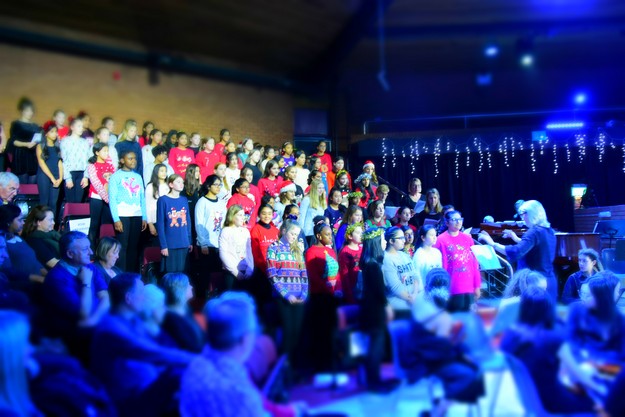 Some Year 12 pupils have been employed by Santa, helping him with replies to letters from Year 1 and 2 pupils at a nearby primary school. They have performed secretarial duties for Santa, answering letters from the children and putting them in colourful envelopes ready for delivery. 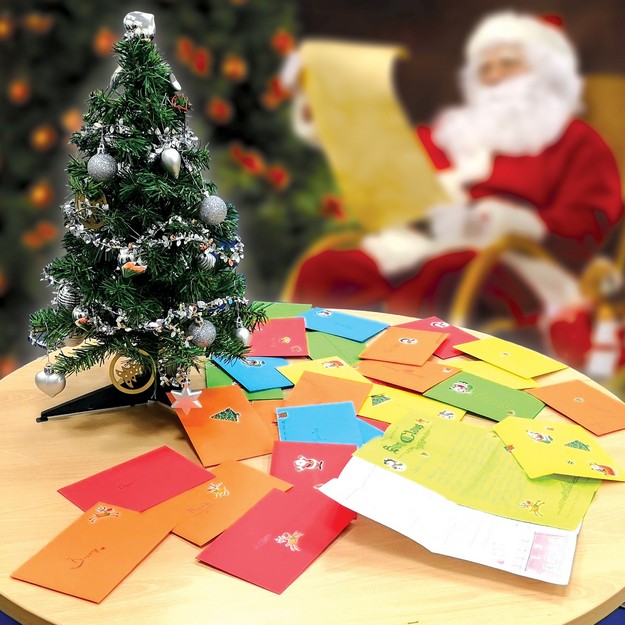 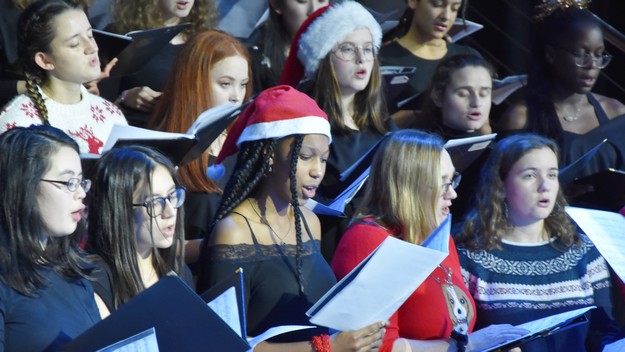 At the start of the festive season, we once again welcomed local Senior Citizens to Withington for a very special Christmas Concert. Around 200 guests attended, and were treated to a musical extravaganza followed by a festive tea-party. 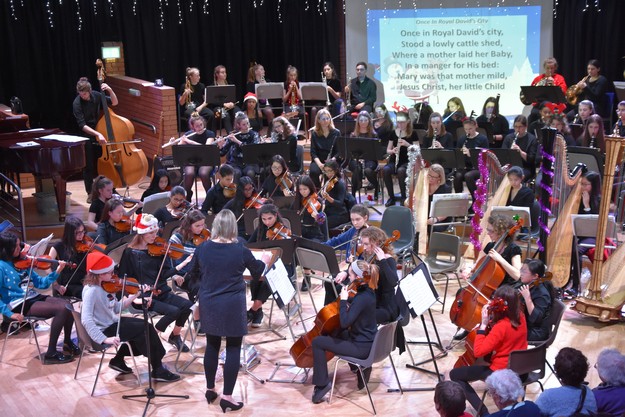 The Senior Choir and Orchestra came out in full force to perform many Christmas classics, alongside a medley from the film, The Greatest Showman. Audience participation was encouraged during the orchestra’s renditions of Jingle Bell Rock, 12 Days of Christmas, and O Come All Ye Faithful, and the concert came to a fabulous end with everyone (choir, orchestra and audience alike) singing along to Merry Christmas Everyone. 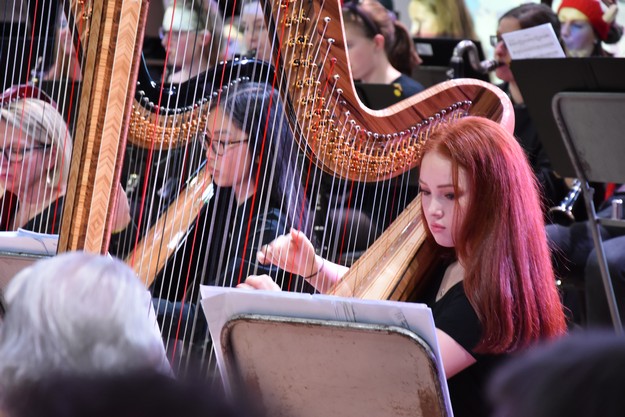 This year’s Senior Citizens Concert also saw the exciting debut of Withington’s brand-new Staff Choir, led by the ever-enthusiastic Mrs Sargent. This special addition to the programme saw staff members perform My True Love Gave to Me, a modern take on the 12 Days of Christmas.

As always, Withington pupils made invaluable contributions to the event, whether performing in the choir and orchestra or serving the Senior Citizens at the tea-party following the concert. In the run-up to the concert, the House Committees had been hard at work fundraising through cake-sales and a sponsored dodgeball competition, as well as collecting donations of gifts for the guests. 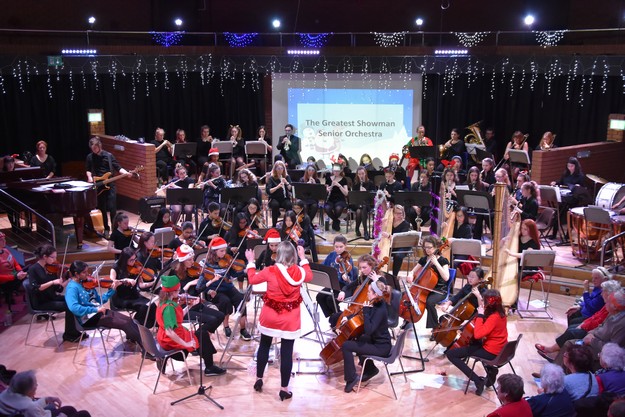 The concert was a huge success enjoyed by all, and a fitting start to Withington’s festive celebrations!

Mrs Haslam said: “Many congratulations to everyone involved. It was a truly uplifting evening which was greatly appreciated by all who attended – and enjoyed by everyone. This was a real team effort with many pupils and staff involved. Thank you to everyone who contributed time, talent, gifts, food and so much Christmas joy.”

As is traditional at Withington, festivities began with a Festival of Lessons and Carols held at St Ann’s Church, Manchester, an event that has taken place every December since – as far as we can tell from our school archive – 1956. The service was preceded by a visit to a city centre Italian restaurant by our choristers and readers who also enjoyed browsing around the German markets. Later, they joined fellow pupils, family, friends, alumnae and staff, to take part in a service that each year heralds the start of Christmas celebrations at Withington, providing time for poignant reflection as well an opportunity for all to enjoy the music and readings. Proceeds from the church collection will be donated to the children’s charity, the Wood Street Mission.

Getting ready for Christmas!

Tis’ the season to SPARKLE – Christmas decorations  popped up all around Withington as soon as the calendar page turned to December. Junior pupils have been getting ready for their Festive Coffee morning with their parents and the Sixth Form Committee have wrapped 200 presents for our Senior Citizen guests who will be here for a tea-party and Christmas sing-along concert on Wednesday. Juniors are rehearsing for their Christmas show and the Sound of Christmas music is ringing through the corridors! 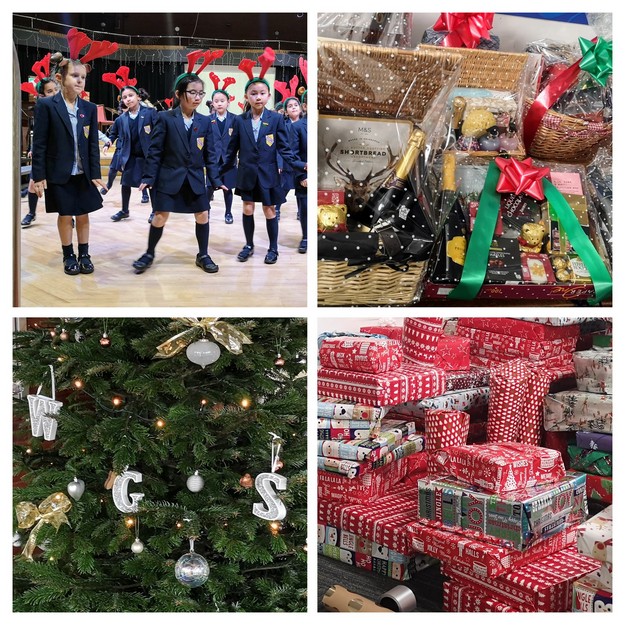 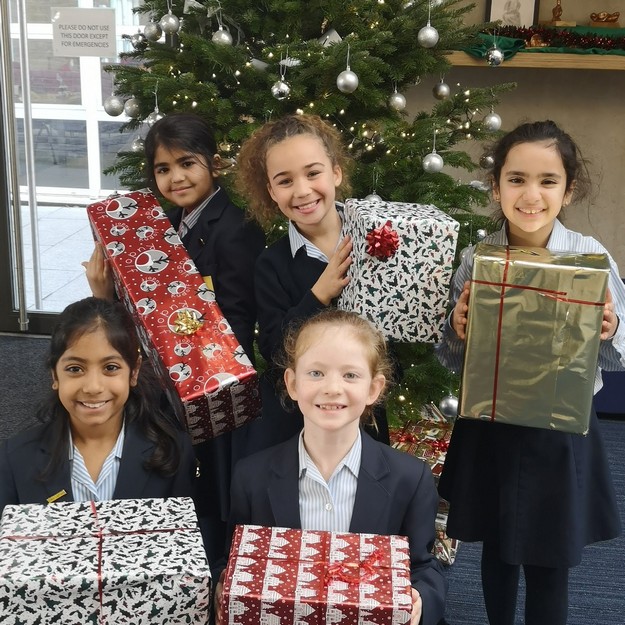 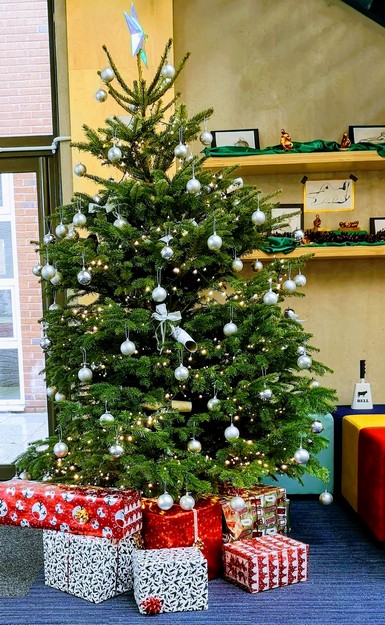 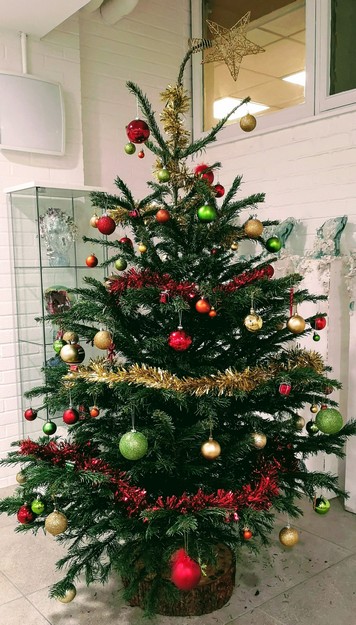