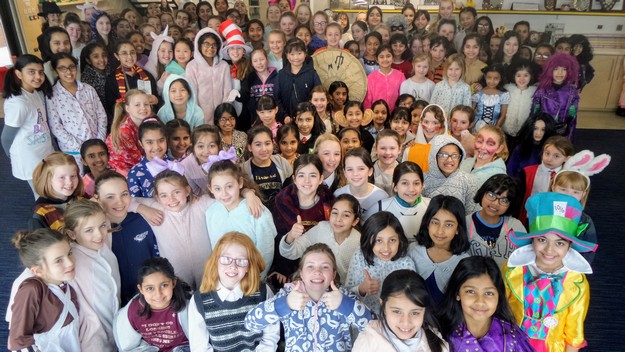 For World Book Day 2018, each class in the Junior School wrote a paragraph for a Withington alternative of the classic tale, Goldilocks and The Three Bears. The paragraphs were then pieced together and read as a whole story during the World Book Day assembly.

We hope you enjoy their flight of imagination! 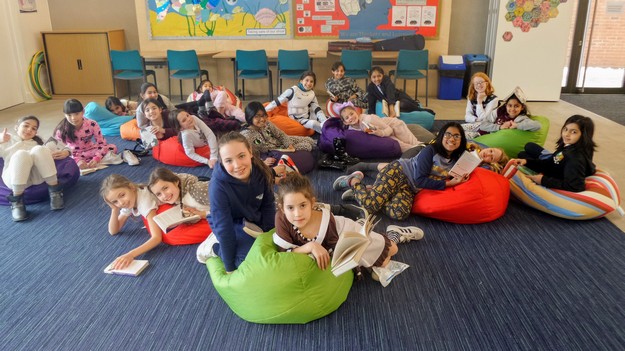 Withilocks and the Three Teachers

Once upon a time, there was a girl called Withilocks. She was called Withilocks because she had long, golden, wavy hair and lived in the Withington area of Manchester. Her hair was as golden as the Queen’s crown. Her dress was as red as strawberries. One bright summer’s day, Withilocks was strolling around Withington looking for a new school when she suddenly saw some grand, tall gates. Upon the gates was a fancy blue sign saying ‘Withington Girls’ School’. Withilocks thought that it looked like an interesting place to visit, so she climbed over the gate and confidently sauntered into the reception. Finding it empty, she inhaled the scent of something very peculiar and decided to investigate.

Following the scent, she ambled along the corridor and found herself at the door to the staffroom. Barging open the door, Withilocks saw three cups of freshly made hot drinks on a round table in the middle of the room. Withilocks snatched up the first cup and gulped some down. “This hot chocolate is too hot,” gasped Withilocks. So she picked up the next cup. “This tea is too cold,” she squealed. She moved onto the next cup, which had an umbrella sticking out of it, and slurped some of the delicious coffee (a semi-skinny latte bambacino with coconut milk and marshmallows – to be exact). “Ahh, this is just right!” And she gurgled the whole cup down, stuffing extra marshmallows into her pocket to eat on the rest of the adventure.

Withilocks’ legs began to feel heavy and weary and she felt like a nice sit down somewhere comfy and cosy. Withilocks peered down the corridor and spotted a hot pink, glittery door, covered in rainbows and unicorns. She liked the look of that, so, slowly and carefully, she turned the diamante door handle and tiptoed inside.

Once inside the room, she spotted a very fancy chaise longue, in baby pink crushed velvet, scattered with cushions covered in golden sequins. “This must be the room of Mrs Haslam, the Head of Withington,” thought Withilocks. “It looks very fancy and luxurious.”

She lay stretched out across the chaise longue but she couldn’t get comfy because of all the scratchy sequins! “Ouch! This just won’t do, this chaise is too rough and itchy!” Withilocks jumped up and headed for the Junior School.

In the Junior School, Withilocks came across an extremely important looking door. On the door was a collection of awards and certificates. “This person must be very clever and important,” thought Withilocks to herself. Next to the awards was a framed photograph of a former Withington Head Girl – ‘K. Hardy’ read the caption underneath it. In the middle of the door was a sign in golden font – ‘Beware, Big Boss Burrows’ it read. “This must be the Head of the Junior School’s room,” said Withilocks to herself and in she went.

Behind the desk, stood an important looking chair, covered in cushions in the shape of dogs – all kinds of dogs – dalmatians, terriers, westies, poodles and pugs. As Withilocks sat down against the cushions, she got the fright of her life. The dog cushions made dog noises!  Barking and yapping, growling and howling – what a noise! “How can this lady get any work done with all this dog noise? It’s not relaxing at all, I’m off!”

Withilocks headed for the Music Department – surely she would find a relaxing place to sit amongst the music there? The door was very interesting and took the form of a keyboard. Withilocks had to play Gaudeamus correctly for the door to open. Inside the room, Withilocks spotted Mrs Sargent’s chair. It was brightly coloured and covered in treble clefs and musical notes. The chair legs were made from recorders and the seat of the chair looked like a bass drum. When Withilocks sat down, the chair obviously thought she was Mrs Sargent. “Marvellataaaaaaayyyyyy” sang the chair. Soft, soothing music began to play and the chair went into massage mode. “This must be where Mrs Sargent comes to calm down when Form I make their recorders squeak too loudly,” thought Withilocks to herself. She found Mrs Sargent’s chair to be just right and she enjoyed a nice, relaxing lullaby and a massage while she rested her weary legs.

Quite quickly, Withilocks got bored of being massaged and decided to continue exploring. The girl strolled upstairs and into the grand Junior School library where hardback stories gleamed in the sun like gems and jewels. She found three lonely-looking books on a large mahogany table and noticed how different they all were. Her eyes widened in awe as she saw a glossy planner with the name Mrs Burrows blazoned across it. She walked over to the book and read:

Her eyes moved downwards to find a terrifying discovery

In shock, she slammed the book closed and shouted, “Too weird!”

Startled, she moved on to the next book which was intricately decorated with musical notes and titled ‘Mrs Sargent’s Marvellate Mysteries – DO NOT READ (the personal diary of Mrs Gilly Sargent). She smirked and thought, “No one’s here MUAHAHAHA! So I will just ignore the instructions, open the book and read all of her secrets!’ Excited to see what secrets were lurking between the pages, she flung open the mysterious diary.

Today, dare I say it, was not marvellate or bench mark high. I have never realised how clumsy the Lower IIX class actually are! Today, Aastha la Vista fell over her own feet, went soaring forwards towards the piano before landing in a thud on top of my favourite uke tree (the one I cuddle at night). The ukulele smashed into millions of pieces. So I banished her from Sarge’s Army. Many tears and tissues later, I’ve managed to find a replacement for poor Paul the Uke (RIP).

She raised her eyebrows in disbelief and continued to thumb the pages before whispering to herself, “Too tragic!”

As the girl was starting to feel tired, she worked her way around the table, picked up the last book and made herself comfortable on the beanbags. She opened the next book: ‘How to be Boring – by Professor Boring’. Surprisingly, it looked VERY well used, as if the owner had read it every day. But who actually was the owner? Curious to find out, she opened it to the first page and read, Property of Mrs Haslam. READ NO FURTHER.’ Shrugging her shoulders in disregard, she read further and turned to the next page. She gasped. It certainly wasn’t ‘How to be Boring’ by Professor Boring’ it was the absolute opposite of boring! ‘How to become a great secret agent’

Step 2: get a job at a top girls’ school

Eyes widening, she realised something that could have come out of a fantasy book… Mrs Haslam, Head of Withington Girls’ School, was actually a secret agent! With all the excitement and confusion, her head pounded like a drum so she decided to rest her heavy eyelids and lie down on the welcoming beanbags.

After a lovely lunch at McDonalds, the teachers eagerly returned to their school. Little did they know what was waiting for them on their return.

Firstly, they went into the staffroom because although they had just had a coffee at McDonalds, teachers always want another cup of coffee. Plus biscuits. Or cake.

“Someone’s been drinking my coffee,” squealed Mrs Sargent. “It was a semi-skinny latte bambacino with coconut milk, marshmallows and an umbrella on top. All the froth has gone, someone has pinched the marshmallows and the umbrella is missing. I’m not touching it now.”

Next they went back to their rooms to check nothing had been disturbed.

“Someone has been lying on my sequinned chaise longue, but they’ve covered it in marshmallow goo!” shouted Mrs Haslam.

“Someone has been sat on my dog cushions and now the sound doesn’t work!” groaned Mrs Burrows.

“Someone has sat on my massage chair and now it doesn’t sing to me!” exclaimed Mrs Sargent. “Look one of the recorder legs has a miniature umbrella sticking out of it!”

The teachers came to the (obvious and traditional) conclusion that an intruder must have made their way into the school and had taken it upon themselves to sit in their chairs and sample their hot drinks. Without saying a word, the teachers expressed their anger by giving each other the classic teacher raised eyebrow stare. They knew they had to find the culprit. After a minute of the classic teacher raised eyebrow stare, a snore could be heard coming from the first floor of the Junior School. This was their opportunity!

They couldn’t quite agree who should go up the stairs first. The trail of marshmallows lay before them as a mysterious and tantalising clue as to where the intruder lay. The anticipation of what stood ahead of them made their hair stand on end. After a brief squabble, they decided to discuss the WGS values of respect and responsibility. Then they agreed it would be fairest for them all to ascend the stairs together in unison. Linking their arms together, they gingerly tiptoed onto the first step. A loud creak echoed through the Junior School, but this was no match for the ferocious cacophony of the snoring which cascaded from above.  Gradually they proceeded upwards, cautiously and nervously. The snoring was now much louder and was clearly coming directly from the Junior School Library. They peered through the narrow window in the door, expecting a monstrosity of a creature. Much to their surprise, they saw a tiny girl with hair as golden as the queen’s crown and a dress as red as strawberries, curled up on the bright bean bags, encircled by a smattering of half-eaten marshmallows. They pushed the door open with force which disturbed Withilocks’ peaceful sleep.

Bewildered and shocked, Withilocks blinked, blinded by the light. She had not recalled falling asleep on the beanbags and she was astonished to see three stern faces looming over her. After a few awkward seconds of time, in which Withilocks and the teachers locked eyes as if they were staring into each other’s souls, Mrs Sargent yanked out her ukulele (labelled Paul 2) – seemingly from nowhere! Suddenly, Mrs Sargent burst into an exhilarating rendition of Calypso. Mrs Burrows shot Mrs Sargent a warning stare and the music abruptly ceased. The girl, still settled upon the beanbags, wondered to herself, “Am I still dreaming?” Overwhelmed with emotion, she burst into tears.

Then Mrs Haslam, with great compassion, softly murmured, “Don’t worry, dear, you’ll be okay. Would you like to come to the Arts Centre to watch the Gym and Dance display with us?”

At that, the girl’s smile grew into a huge grin as she hopped off the benabags. The three teachers and the girl paraded into the Arts Centre, with Mrs Sargent gently strumming the tune to the school song, Gaudeamus, on her ukulele. Mrs Burrows and Mrs Haslam sang sweetly to the accompaniment and the girl felt like she was right where she belonged.