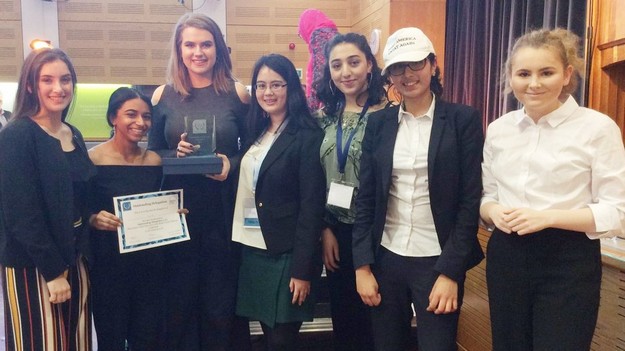 Withington’s USA Delegation won the Outstanding Delegation accolade at the MHSG MUNHIGH18 Model United Nations Conference, adding to the School’s impressive MUN record of four wins out of the last five conferences attended and the second year in succession they have won the MUNHIGH Conference.

Held over the weekend of 27-28 January, 23 WGS girls took part, representing the delegations of USA, Iraq, the Republic of Korea and Burkina Faso. Over 300 delegates, making up 53 delegations, attended this two-day conference, so there was plenty of competition to overcome.

There were eleven individual winners altogether:

South Korea representatives, Mia and Tara, got a Special Mention and a Commended respectively. For Burkina Faso, Samara got a Commended and Evie and Imaan each got a Highly Commended. Manaal, representing Iraq, was also Commended. From the winning USA delegation, there were five awards: Diya, Commended; Charlotte, Highly Commended; Ella, Jenny and Namitha were awarded Outstanding.

MUN Coordinator Mrs Clark said: “Well done to everybody who participated with a special mention for the three girls who were Chairs at the conference and have done so much to help all the delegates in their preparation – Timi, Jessica and Anya.”

Next on the horizon is an International MUN Conference in Washington DC, USA, during February Half Term. We can’t wait to see how our Withy girls get on in an international arena!